Filming Greece | Ministry of Digital Policy at the 1st International Archaelogical, Ethnographical and Historical Documentary and Cultural Festival in Cyprus

The Ministry for Digital Policy, Telecommunications and Information supports and actively participates in the 1st International Festival of Archaeological, Ethnographic and Historical Documentary and Culture (AEI-CineFest), held in Cyprus from 19th to 23rd September, 2018.

AEI-CineFest 2018 is part of the European Year of Cultural Heritage 2018 celebrations, and is organized by the documentary production company TETRAKTYS FILMS, in collaboration with the Municipality of Aglantzia, Nicosia, the Cyprus Broadcasting Corporation (RIK) and the Archeology Research Unit of the University of Cyprus.

The Greek Press and Communication Office of Nicosia, representing the Ministry of Digital Policy, Telecommunications and Information, works closely with the Festival organizers with the aim of supporting entries from Greece and informing about initiatives of the Ministry in the audiovisual industry .

Specifically, Dr Aikaterini Lambrou, Head of the Press and Communication Office of the Embassy of Greece in Cyprus, will present on Saturday, 22 September 2018, the new legal framework supporting the audiovisual industry in Greece and the attraction of film productions through specific incentives (Law 4487/2017), as well as the ongoing process at the National Centre for Audiovisual Media and Communication (EKOME). 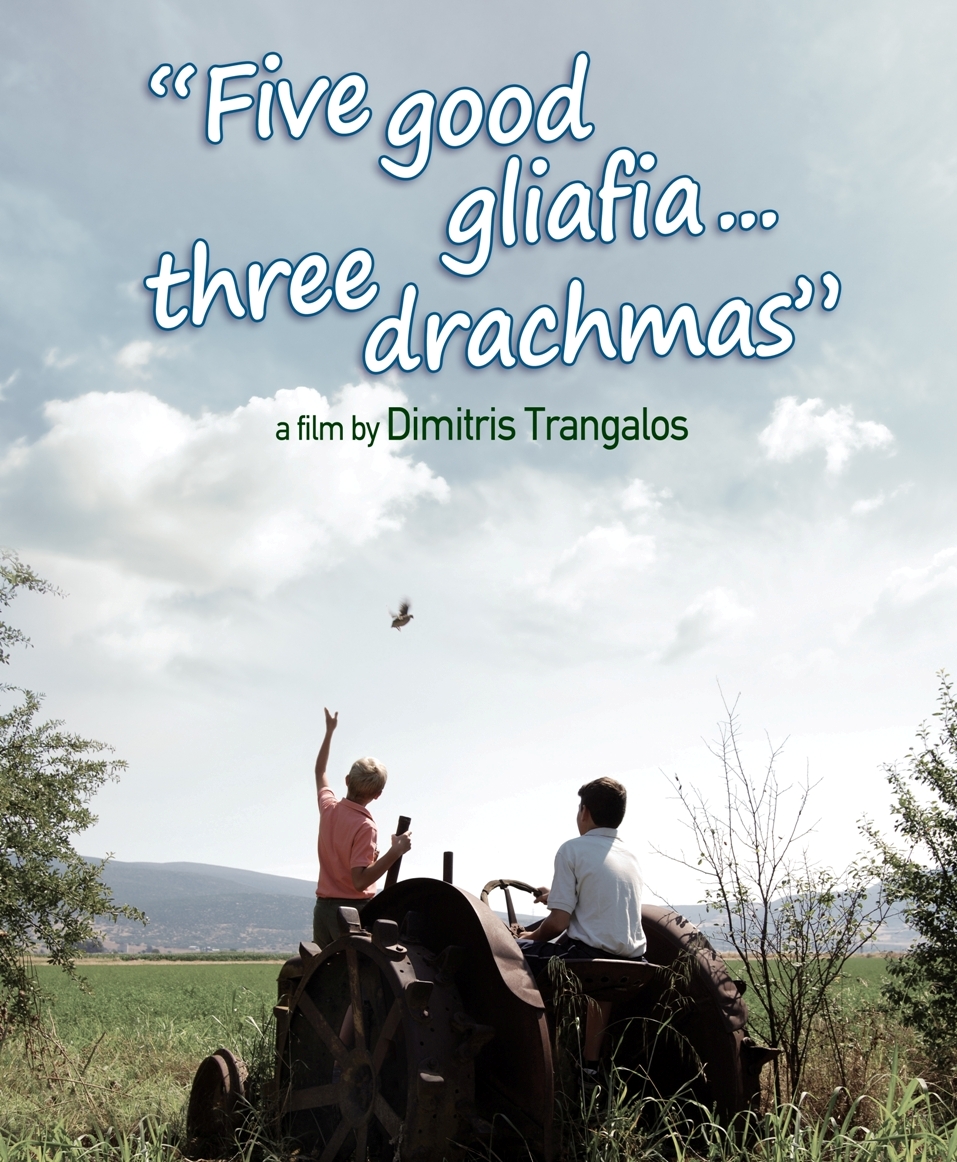 At the AEI-CINEFEST 2018 International Festival events, taking place at the "Skali" cultural area, in the Municipality of Aglantzia, Nicosia, 28 documentaries of archaeological, ethnographic and historical subject matter from seven countries (Cyprus, Greece, France, the United States, the United Kingdom, Serbia and Palestine) will be screened.

The entries from Greece are “St Valentine’s secret trip” by Yiannis Xirouhakis, “The Silence of Asia Minor” by Eleni Konstantinidou, and “Five good gliafia …three drachmas” by Dimitris Trangalos: Yiannis Xirouhakis, on the occasion of the return of the remains of St Valentine, brings to life the golden age of cosmopolitan Lesbos of the early 20th century; Eleni Konstantinidou records the ethnic, sociological and cultural changes of Asia Minor over the years; and finally, Dimitris Tragalos recounts beautiful childhood memories at the archaeological site of Elatia, Fthiotida, in the early 60s.

Interview with the Festival's artistic director 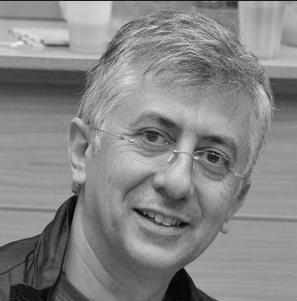 Film director Stavros Papageorgiou, the Festival’s artistic director, talked to Greek News Agenda* about his vision as well as the current state of documentary productions in Greece and Cyprus.

What was the initial motive that sparked the organization of an international Archaeological/Ethnographic/Historical film festival in Cyprus?

Holding a film festival of archaeological, ethnographical and historical documentaries has been a personal vision for some decades that has finally come to fruition this year. There were various reasons for doing this: Firstly, several Cypriot documentaries belonging to all three categories could not, for many years, be screened at any of the existing national festivals, on account of their thematic category; Secondly, Cyprus, an EU member-state, remained the only country without such a festival, which I consider very important, as the issues dealt with by these films contribute to the promotion, propagation and dissemination of the history and cultural heritage of Cyprus; Thirdly, my personal interest in producing such documentaries, some of which are ‘Entelechy’ (2010), ‘The Great Goddess of Cyprus (2015’, and Kiniras: Kytion Priest (in production phase)

Tell us more about your vision for the future of AEI-Cinefest, and documentary-film production in Cyprus and Greece, given the fact that people in the Mediterranean and Middle East region have in recent years experienced a multifaceted crisis (political, economic, cultural and moral).

AEI-Cinefest comes into being this year (with very good forecasts) after 2018 was declared European Year of Cultural Heritage and the Republic of Cyprus included our Festival in the official list of events. The initials in the ‘AEI’ acronym stand for Archeology, Ethnography and History, but there is also a special meaning: the word αει in ancient Greek means always/forever. So I think for certain that it was created to have a developmental path over time so as to serve the reason for its creation, as a conduit for the promotion and dissemination of the cultural heritage of Cyprus.

I am pleased to note that documentaries in Cyprus and Greece are gaining ground. However, they still have a long way to go to reach the level of documentaries from other European countries. Cypriot and Greek documentary makers are not in want of creativity and talent compared with others from around the world. Moreover, there is unlimited material from which documentary filmmakers can draw for their works. What is important is to focus on how to approach their subjects, while building synergies with colleagues and others working in the field in the international arena so as to allow their documentaries to travel around.

Do you believe in synergies in the audiovisual and other creative industries between the private sector and states, aiming for a win-win-situation?

Any form of synergy in the audiovisual sector with either public or private sector institutions / organizations is welcome and essential nowadays. Moreover, this is broadly the EU and European philosophy as regards the audiovisual sector: see e.g. CREATIVE EUROPE and EURIMAGES; and at national level, the Greek Film Centre; SEKin (Cyprus Cinema Advisory Committee); the National Centre of Audiovisual Media and Communication - EKOME S.A. etc

And through these synergies, whether they are sponsorships, co-productions etc., the benefit is mutual and undoubtedly contributes to the qualitative development of the audiovisual product and its export to other countries, with all the benefits (economic, cultural, political etc.) entailed.

Greek News Agenda also interviewed* Yannis Xyrouchakis and Dimitris Trangalos - whose films Saint Valetine’s Secret Trip and Five good gliafia... three drachmas will participate in the festival - about their films, synergies and the current state of the audiovisual industry in the two countries. 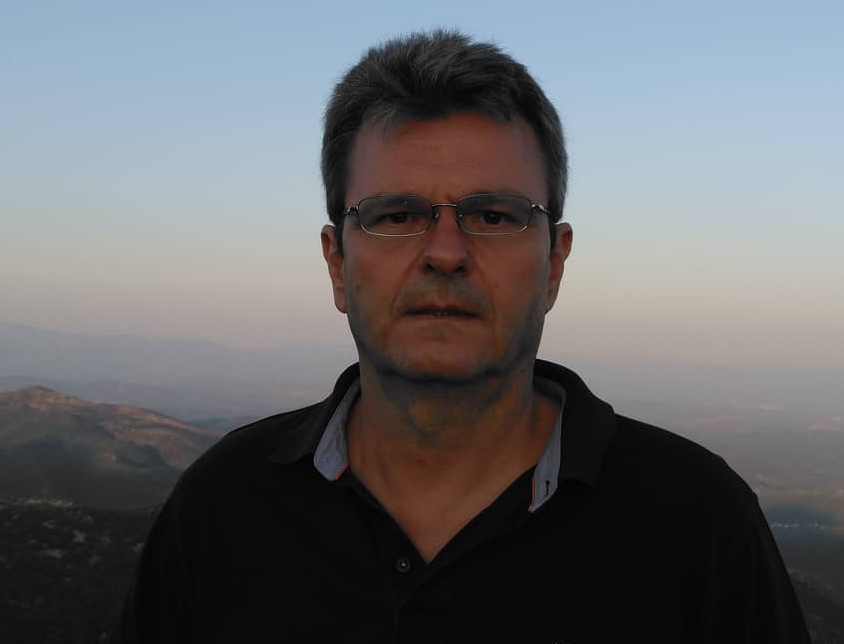 Yannis Xyrouchakis has worked as film editor for ERT SA (Hellenic Broadcasting Corporation), and has taught cinematographyand editing in “Make Your Own Movie” workshops. He has received an award for editing the documentary “The shepherd’s feast” at the 5th International Documentary Festival of Ierapetra (2018). His films include “Memories and testimonies – the long night of dictatorship” (2017); co-direction of two episodes -“Georgios Rallis” (2014) and “Anastasios Peponis” (2013)- of a Historic Documentary series for Vouli TV (Greek Parliament TV station,as well as two documentaries tittled “Ntikos Byzantios: the chronicle of forms” (2012), and “Periklis Byzantios a painter’s life” (2011). 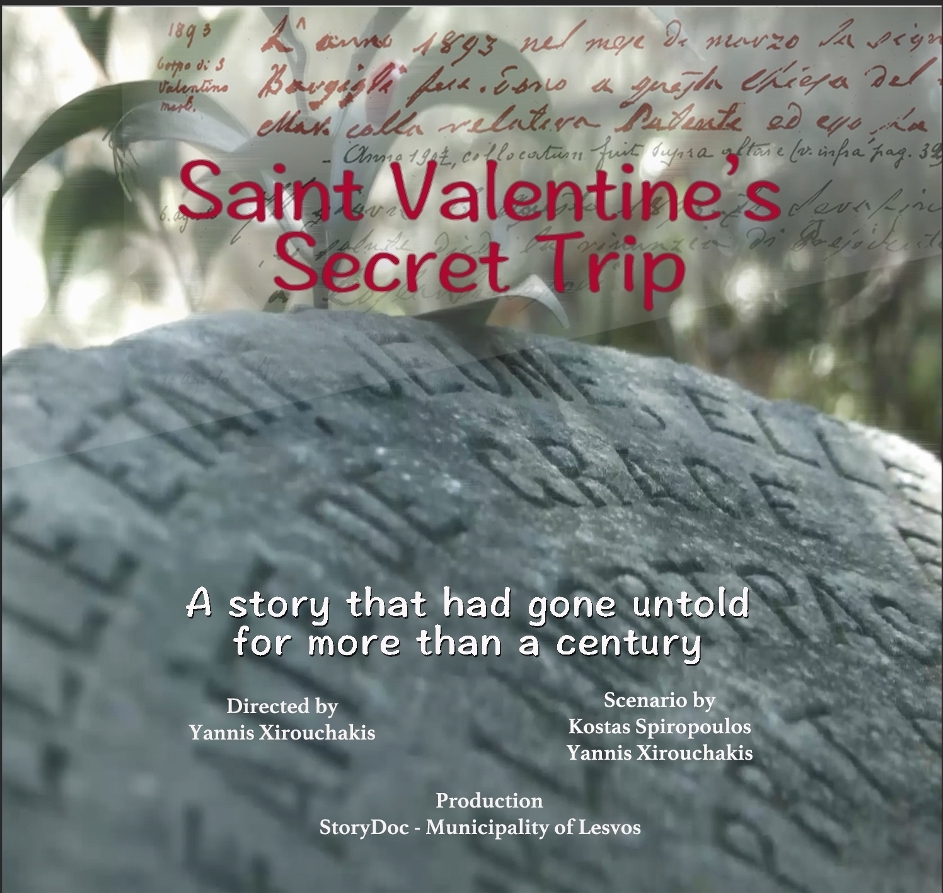 What is your opinion of the audiovisual media industry in Greece and Cyprus at present?

The audiovisual industry in Greece faces major difficulties, the main one being funding. The number of producers has declined to a large extent and the consequences of decreases in funding are reflected on the final result. At the same time, several Greek TV series are produced in Cyprus to take advantage of lower taxation and lower production costs.

Do the relics belong to the Martyr Valentine? Yes, the Pope affirms. But then why has this unique event remained secret, buried with the relics of Valentine? And why is it being withdrawn from obscurity and oblivion now?

A historian from Mytilene, an architect who participated in the restoration of the temple together with the researcher, is looking for answers. Who was the saint whose relics are in Frangoklissia? What was Mytilene like in the 19th century and relations between its inhabitants? When were the remains removed and where have they been all these years? Why are they being returned now?

The Archbishop wants to preserve the history of the Catholic Church in Mytilene and to grant it prestige. The local community, politicians, merchants and hotel owners all wish to make good use of the discovery: "The island of Sappho and Elytis is also the island of all lovers." The commercialization of St Valentine continues to divide both church and society.

Do you believe that synergies between the private sector and states in the audiovisual and other creative industries aim at a win-win-situation?

Such synergies add financial resources to the audiovisual industry, supporting and increasing the process of quality production, while states are financially bolstered by the funds invested in productions, which increase employment and boost their image. Support from state institutions is particularly important when it comes to the production of historical - folklore documentaries. 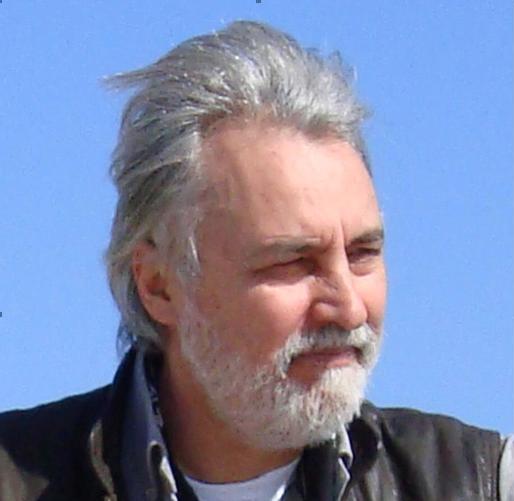 Dimitris Trangalos has studied mathematics, electronics and film directing. Since 1985, he has worked as film editor for the Greek public broadcaster. He has taught for many years Film editing at the Department of Cinema of Aristotle University in Thessaloniki, as well as Film editing, Animation and Photography at several film schools in Athens. He has collaborated with the Greek Film Centre and Educational Television. His filmography includes “Five good gliafia …three drachmas” (doc. 79΄), (2018); “Donkey-island” - The last paradise (doc. 28΄) 2002; “Death or freedom” (documentary 34΄) 1997; “The most important game: (fiction 78΄) 1992 and more.

What is your view of the audiovisual media industry currently in Greece and Cyprus?

As far as Greece is concerned, the television landscape is quite dim. The audio-visual media industry, especially television, which offers "what the public wants", often offers products that do not meet principles of art and aesthetics. The need for easy profit and the high demand for products that would cover 24-hour programs ultimately results in quality downgrading. Unfortunately, the difficult financial situation of recent years does not facilitate the production of quality films and other TV products; it does not reflect the capabilities and talent in Greece.

Tell us more about your documentary film that will be screened at the AEI-Cinefest 2018.

"Five good gliafia ... three drachmas" is a docudrama. Gliafia is an idiom for all ancient coins (Greek, Roman and Byzantine) in the region of Elatia, in Central Greece, and the drachma was the national currency, before its replacement by the EU single currency, the euro.

In those years, the unprotected archaeological site of Elatia was a playground for children. They would fly their kites there, watch the Acropolis rally, and play football and other team games. Often, following heavy rain, we’d go there in search of ancient coins. It was also one of our games, until the day when a strange old man appeared in the village.

The film title refers to a transaction in which five ancient coins were exchanged for three drachmas. Out in country villages, in the early 60’s, three drachmas were a small fortune for a child. This money was enough to buy a few donuts and to watch the merry-go-round-of-death spectacle with motorcycles that would come to our annual village fair. A recent book by a teacher of mine, along with my childhood diary, has brought back memories of beautiful images and instances from those times. 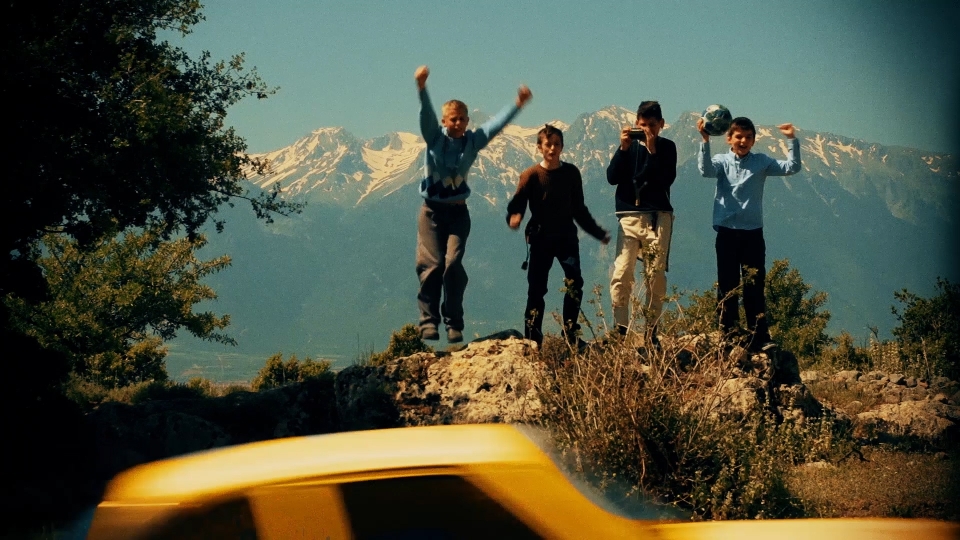 Do you believe that synergies between the private sector and states in the audiovisual and other creative industries aim at a win-win-situation?

Motion picture and TV series are a group art, needing the co-operation of many skilled people to produce a decent quality product for each market. Private companies and individuals are not excluded from collaborations. They should indeed cooperate, always in respect of rules of art. Profit must not overshadow art, and we have many examples where remarkable works of art were also huge commercial successes.

* Interview by Dr Aikaterini Lambrou, Head of the Press and Communication Office of the Embassy of Greece in Cyprus.