Filming Greece | Angelos Frantzis: Whodunit is of little concern to me 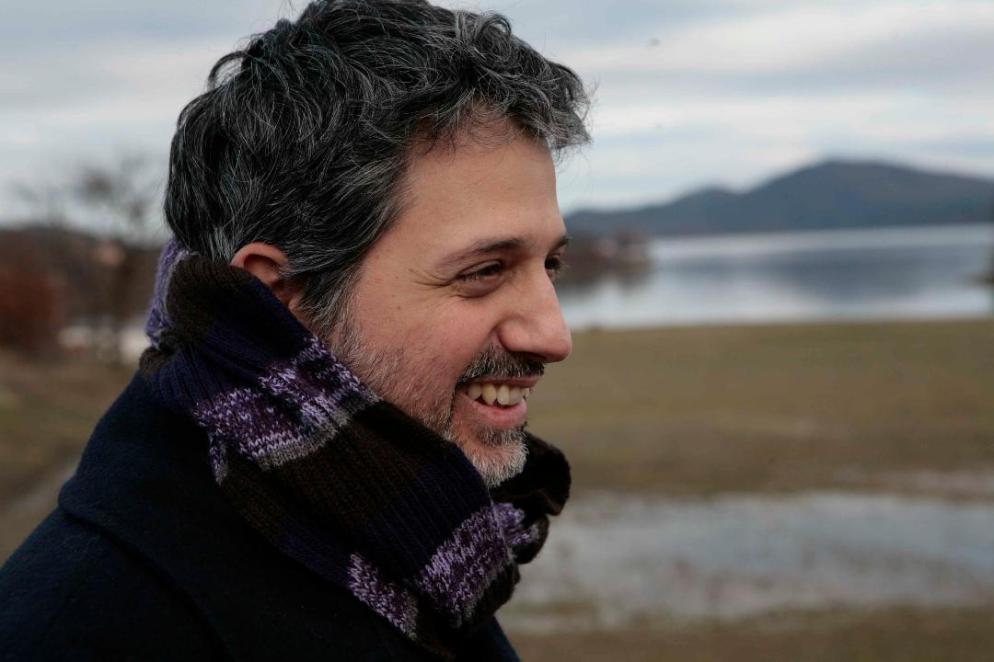 In Angelos Frantzis’ latest film, “Still River” (2018), Anna and Petros, a Greek couple, have recently moved to an industrial Siberian town on account of Petros’ work and are shocked to discover that Anna is pregnant without intercourse having taken place at that time. Did she cheat? Are they victims of a conspiracy? Or blessed with a miracle?  Looking for a logical explanation, Petros begins to distrust Anna, who chooses to embrace the pregnancy, turning to religion to cope. Their previously unshakeable bond starts to falter and cracks begin to show, as their relationship becomes the battleground between the rational and the spiritual. Set against the striking frozen landscapes of Siberia, Still River is a haunting, touching suspense drama about love, trust and faith struggling in the face of doubt.

Angelos Frantzis was born in Athens in 1970. He studied Film Direction at INSAS in Brussels. He has made five shorts and five feature films: “Polaroid” (2000), “A Dog’s Dream” (2005), “Into the Woods” (2010), “Symptom” (2015) and “Still River” (2018), which have been screened and awarded at many international film festivals. Besides film directing, Angelos Frantzis has been involved in mixed techniques art projects (installations, performances), has worked as a film critic, publishing reviews in various books and magazines and has taught film studies and acting. His installation “Got to be Real” participated at the Venice Biennale 2012. Interviewed by Greek News Agenda* Angelos Frantzis talks about “Still River”, filming in a snowy landscape and the insignificance of some questions. 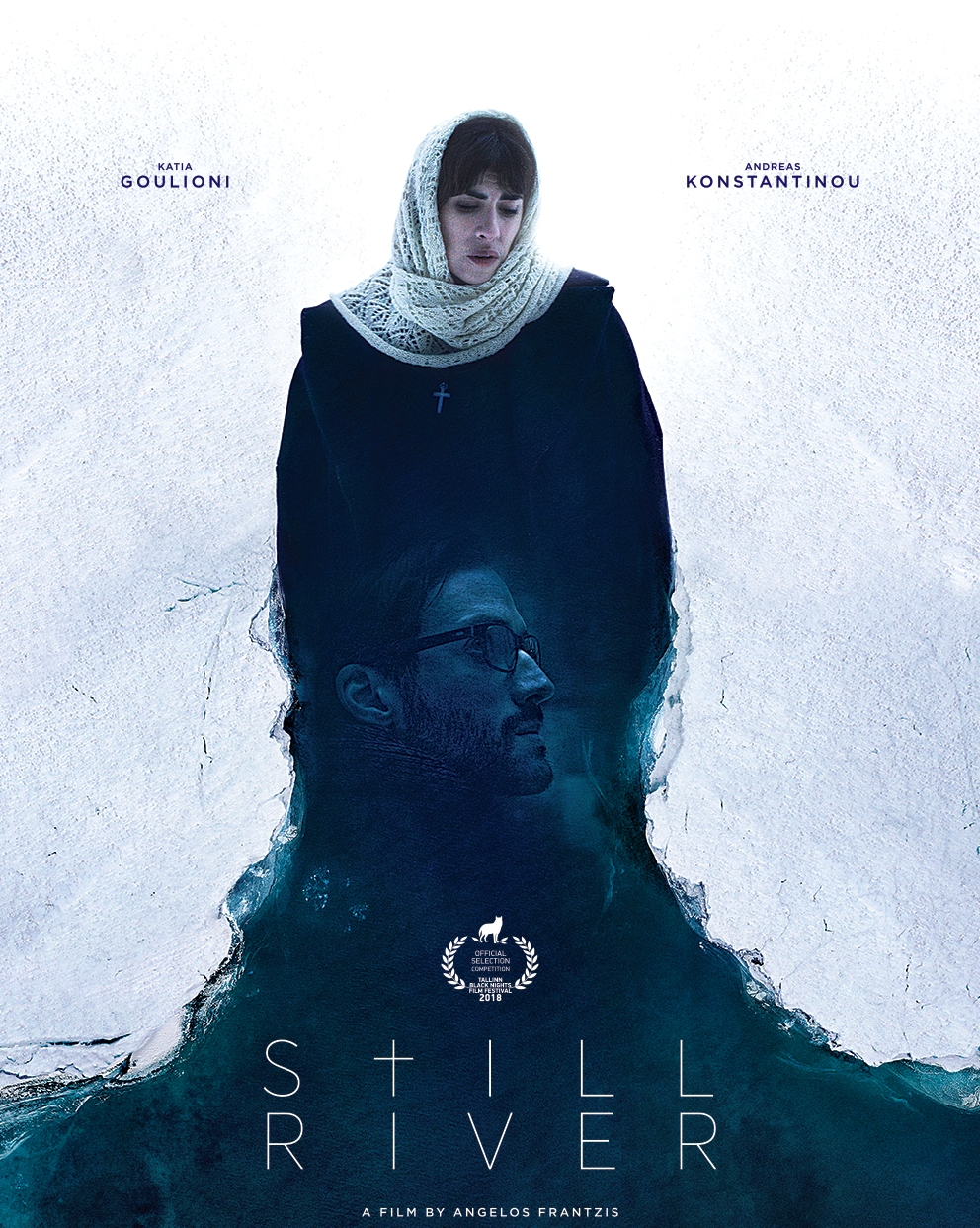 Is “Still River” the least experimental of your films?

For me it was my most experimental one, in a way. In this film, I experimented with balancing my point of view between a classical narration, i.e. a drama with a beginning, middle and an end and my personal style and cinematic universe. My previous films are less narrative, with the exception of my first film, “Polaroid” that has a more linear story.

Nevertheless, there is an open ending in “Still River” which is a modernist trait.

This film has an enigma plot. It’s a Hitchcockian whodunit, which ends up as an existentialist whodunit; and there is no answer to this existential question. Whodunit is of little importance: it serves as a pretext leading us to other questions that prevail over whodunit. If I gave an answer, it would be as if I took a stand, whereas the story begins with an inexplicable event and asks what this event can inflict upon these two people and society in general. 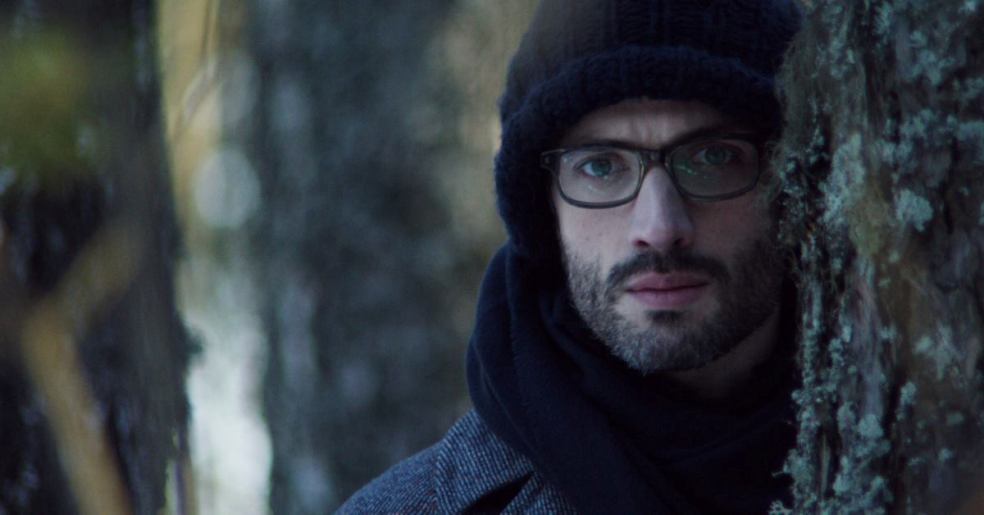 There can be many readings of a film: we can perceive a film in many different ways and this is the most interesting part. Although I did not intend to make an allegory about the crisis, it was a motive. When we wrote the script with Spyros Krimbalis, all that fear and damage inflicted widely was carried into the couple’s relationship; and it is very interesting to see how something that concerns society becomes personal, and the personal becomes universal.

So, you transfer a story to a smaller scale.

One of the issues the film deals with is that of the coexistence of contrasts. Coexistence is tested in the most evident way in a couple’s relationship.

Your film focuses both in terms of form and content on the concept of the juxtaposition of contrasts. A scientist who is married to an artist, their different worldviews, Anna’s faith as opposed to Petros’ rationalism, the white background and the black contrasts. Where do contrasts lead: to conflict, harmony or something else?

As you said, the film is based on dipoles, both in form and content. As the story unravels, it exposes the false mechanism of construction of these dipoles, in that the differences between these dipoles are fake. The contrasts e.g. between science and religion or between faith and reason are products of the western way of thought which don’t let us see things in a broader perspective. This is what happens in the film. The two protagonists stick to their own beliefs and the way they each perceive reality, and their persistence does not allow them to understand each other although they love each other. This persistence leads to consequences that are contrary to what they initially wanted. Petros, for instance, who is a scientist, free spirit and respectful of the rights of others, will end up taking a totally different course of action; the same will happen to Anna.

So if the protagonists followed a different line of thought, this course of action would’ve been avoided.

Exactly. That’s why I said that “Still River” is a film about coexistence. The protagonists can’t see through each other’s point of view. This is the problem and it causes problems on a bigger scale. Unquestioned faith or extreme rationalism can lead to atrocities. This is what happened with Nazism. Let’s also not forget either the atrocities that took place in the name of religion. The two protagonists will pit against each other because they don’t know how to love each other and how to coexist.

Why did you choose Siberia, a place with heavy historical and political connotations, as your film location?

Russia is a place of conflict and ideological and religious belief. Siberia was the perfect place for me because it is covered in snow and it had that “end of the world” feeling, as it was a place of exile in the past, where my protagonists are themselves exiles. All its white landscapes are like white pages that cannot give any answers. The Siberian landscape and its imposing architecture show how insignificant man is.

You were visually influenced by the work of Jonas Bendiksen on the communist legacy (former USSR) in Russia. How did you incorporate his colour palette as well as Russian iconography in your film?

I was always attracted by Russian culture, its classic literature, iconography and architecture. The film’s iconography definitely has a post Soviet style. The film takes place today, but its visual style has a timeless flair, because I wanted to underline the historic impact on that place. That’s why I’m interested in the post Soviet visual references in the work of artists and photographers like Jonas Bendiksen and Russian artists that have worked on the Soviet legacy and its marks in contemporary Russia. Kommunalkas, for example, still exist in Russia, although they don’t house many families together anymore, but there are still similar edifices with the same architecture and interiors. What I also find very interesting visually is the coldness of the landscape, whereas interiors in Russia radiate warmth. Anna is very much attracted to the warmth of the Russian people, their feasts at home, and we had to emphasize that visually. There is also a stark visual contrast between interiors and exteriors. Interiors are very dark as opposed to the vast white landscapes.

Is there a feeling of an unconscious attraction to the past in ‘Still River”?

Yes, but not with in an evocative way. There is no nostalgia for the past. The film is not taking place in the past. I wanted the film to combine traits of the present and the pastin orderto attain a timeless feel. There is an attraction connected to the primal fixation on a trauma. I mean by that that we feel the need to return to our traumas and our traumas create this endless repetition. The protagonists repeatedly return to a traumatic event which defines them, it becomes their driving force and they are not able to come to terms with it.

So Siberia and its traumatic historical past are connected with the trauma that defines the two protagonists.

That’s right. The inevitability of the past and the trauma was an element we extensively used when we were working with the actors to build the story of their relationship. 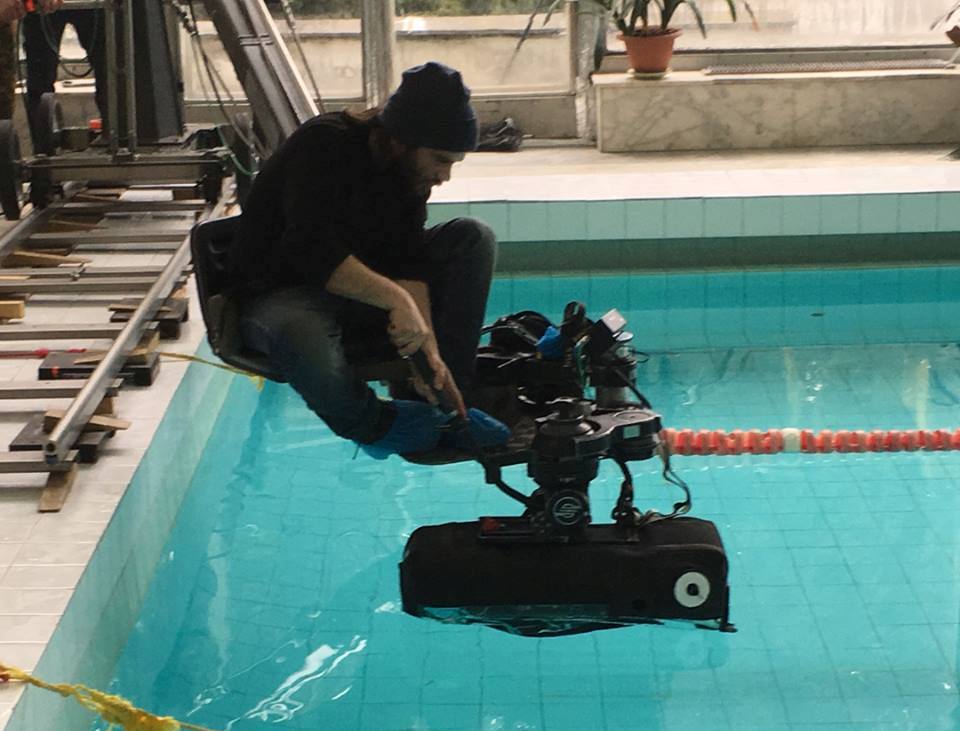 Simon Beaufils on the set of "Still River"

How did you cooperate with DoP Simon Beaufils on the difficulties posed by the landscape (reflections and constant changes in light)?

I was very fortunate to work with Simon, although it was the first time we worked together. Simon is an excellent DoP. All the references I used to define the light we wanted in the film in certain locations, how we would work on the contrasts, the softness of light on faces combined with our desire for very intense black, found a common ground with the way Simon works so we were on the same page on the pre production stage. It was a blessing we understood light in the same way, because it’s not easy to define it with words, you can only talk about it through images. 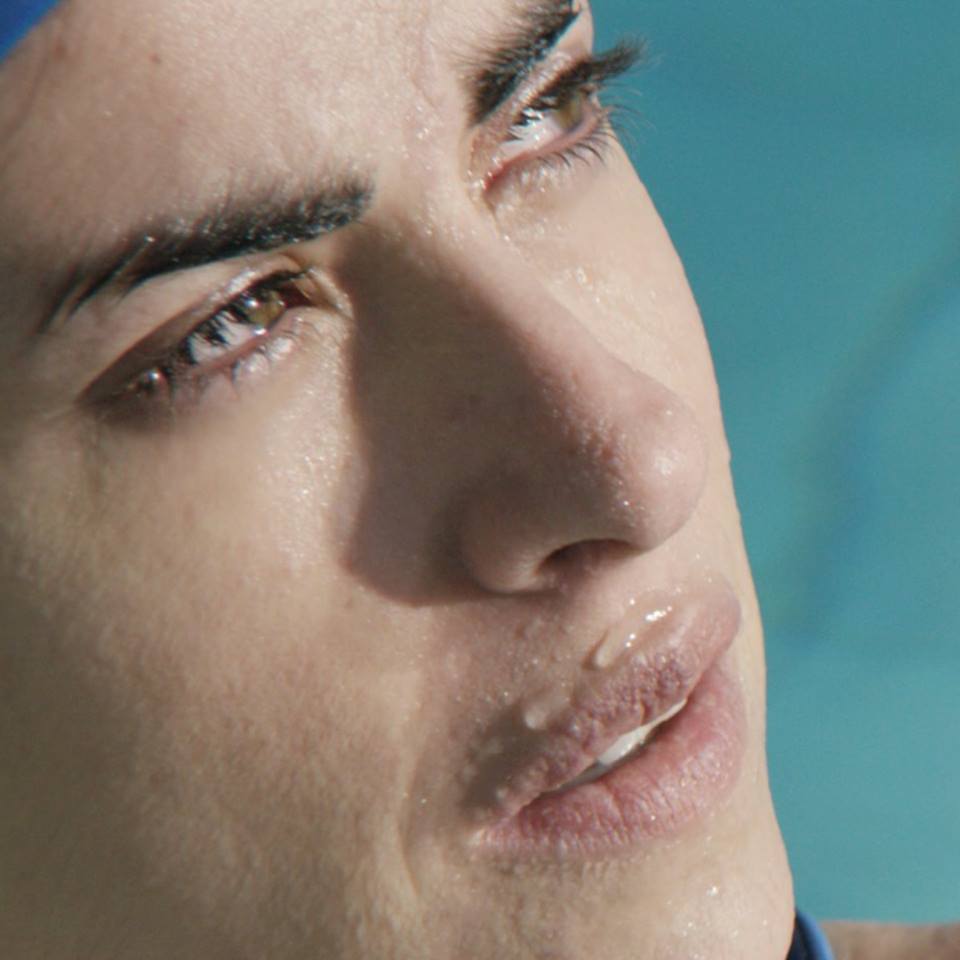 What were the challenges of an expensive production like “Still River”?

It was a great challenge in production terms. There was no Greek funding in the beginning, due to the financial crisis. This was a big setback that caused many delays, not least because it was a film to be shot in a remote country. Heretic films, the Greek Production Company that I worked with, helped a lot in solving the problems as well as the French and Latvian co producers. We were very lucky to find good collaborators in Latvia, where a big part of the film was shot, and in Russia, where many shootings took place.

We faced all kinds of difficulties. In the first year of shooting in Latvia there was no snow, so we had to wait a whole year, hoping for a snowy winter to be able to shoot those scenes in the snow. I have to say that Russia is not a film friendly country as regards co-productions and shooting facilitations. An additional difficulty was the fact that we were filming in cities like Murmansk that are very close to the Arctic, with no film facilities whatsoever. 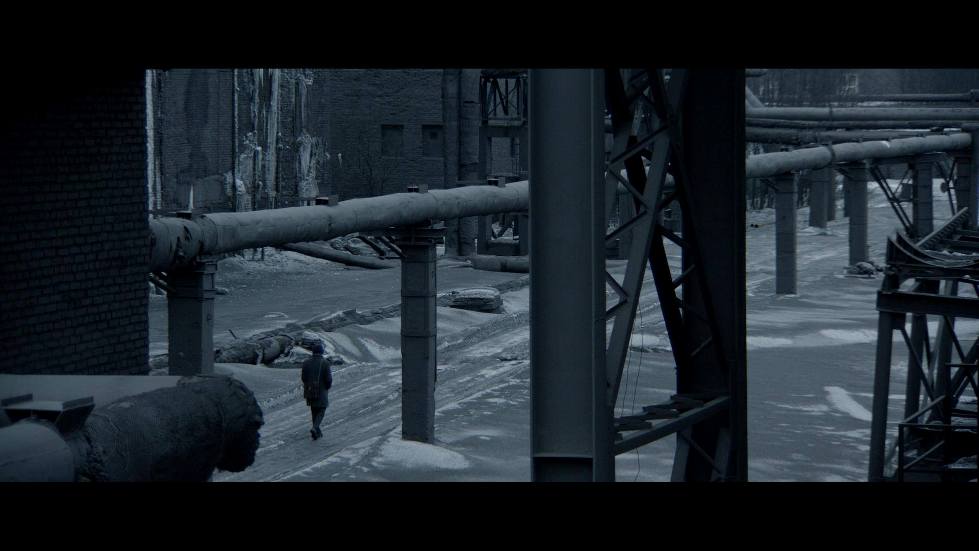 Would an international coproduction be easier today for a Greek filmmaker?

Coproduction in Greece has become easier. Greek producers have grown familiar with co-production and Greek Cinema has enough visibility to seek co-productions. Nevertheless, funds for film production have suffered a dramatic cut, due to the fact that Cinema does not perform in the Box Office on an international scale. So you may have access to international co-production, but funds are dramatically smaller.

What do you think of Greek Cinema? Has it influenced your work?

I always loved the New Greek Cinema of the 70’s. The films of Theodoros Angelopoulos, Nikos Panagiotopoulos and Nikos Nikolaidis, were a great source of inspiration for me. And I’m very interested in current cinematic production. I was mostly influenced by Panagiotopoulos and Angelopoulos, with whom I have worked with for a long period, as well as Tornes, Nikolaides, some films by Panousopoulos and the list goes on.

Read also: The battle as old as time: Angelos Frantzis and Still River