Sia Anagnostopoulou on the progress of Cyprus talks 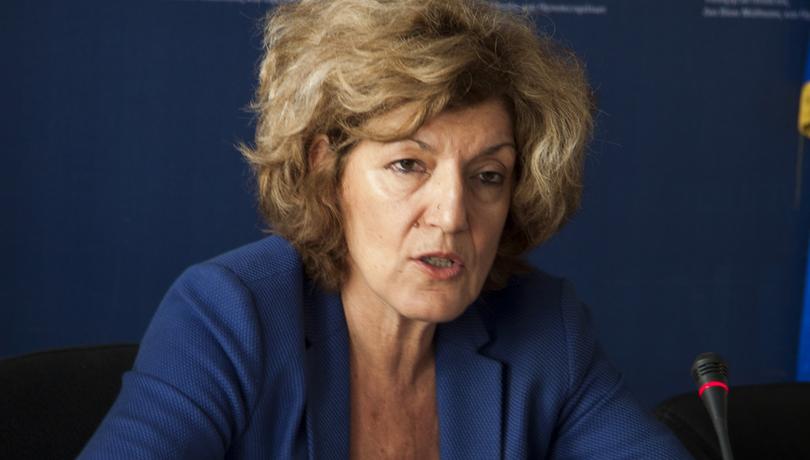 Sia Anagnostopoulou is a SYRIZA MP and associate professor of History at the Department of Political Science and History of Panteion University. She has been visiting professor at the New York University, the University of Cyprus and the Έcole des Hautes Έtudes en Sciences Sociales in Paris. Her main research interests are nationalism in Greece, Turkey and Cyprus and colonialism in Cyprus. She has published two monographies: Asia Minor. The Greek Οrthodox Communities, 19th century-1919. From the Rum millet to the Greek Nation (Athens 1997, in Greek) and The Modernization of Turkey. Islam and Turkish-Cypriots in relation to Kemalism (Athens 2004, in Greek).

Professor Anagnostopoulou is a member of the Paneuropean Committee of the Academy for European History created by Transform! Europe, a member of the Greek Contemporary Social History Archives (ASKI) and a member of  the Board of the  Nicos Poulantzas Institute.

From 2000 to 2003, Anagnostopoulou headed the Cypriot Foreign Ministry's research team on issues concerning Turkey and the Turkish Cypriot community. In the January 2015 Greek legislative elections, Anagnostopoulou was elected as a SYRIZA Member of the Hellenic Parliament for the prefecture of Achaia and was appointed alternate minister for European Affairs. Following the last legistlative elections of September 2015, she was appointed alternate minister for Education, Research and Religious Affairs until November 2016.

Sia Anagnostopoulou spoke to our sister publication Grèce Hebdo* on the progress of the ongoing negotiations on the Cyprus issue, the European contribution to the Geneva Cyprus talks, the importance of installing an institutional framework for the coexistence of two communities of different religions and ethnic groups in one european state as an act of resistance against a galloping nationalism and the EU-Turkey refugee deal:

How would you evaluate recent developments on the Cyprus issue?

Very significant progress has been made. The negotiations between the leaders of the two communities, the Greek Cypriot community and the Turkish Cypriot community, are at a very good point. First of all, there is a historic development, symbolically and literally speaking: it is the first time since 1974, after the Turkish invasion of Cyprus, that the two communities have exchanged maps outlining territorial proposals.

This is important because the leaders of the two communities are trying to define their space -the "border" between their communities- by themselves and through negotiations. In fact, the two communities are trying to reconstruct a "border" of trust and peace between them, thus in practice annulling the consequences of the invasion that has violently imposed a frontier of hatred, dividing the Cypriot area into two worlds, two enemy "countries". Through the presentation of maps, the Cypriot leaders claim that they, and not the Turkish army, are the ones with the responsibility to manage the Cypriot area. This is a first step towards the solution, and it is indicative of the determination of the two Cypriot leaders to move forward.

What is your assessment of the European contribution to the Geneva Cyprus talks?

This is the first time that the European Union has become more actively involved in the Cyprus issue. In my opinion, it is necessary to get more involved, especially since Cyprus is the southeastern border of Europe, the border between Europe and the Middle East. The solution of the Cyprus problem must be at the heart of European policy. Also, through Cyprus (not only Cyprus, of course), the European Union will reinvent itself; it will reinvent its "world" and its region, and the values ​​that prevail in its relations with its neighbours.

The solution of the Cyprus problem, the border problem of Europe, will give out the message that: 1) the European Union has political responsibility for its borders; 2) It does not permit the perpetuation of "grey zones" in its territory, and of zones that lead to the division of its frontiers between a “Christian world” and a "Muslim world", one against the other; 3) It puts a definite end to its colonial past and to nationalist politics that undermine Europeanization efforts of its region; and 4) it turns its borders into a bridge with its neighbours and not a "wall of hatred” between the  European world and the "barbarians".

In short, the resolution of the Cyprus problem, especially at a crucial time for the future -not only of Europe but of the whole world- will demonstrate that European values persist and that the world (on a local, European and global level) is not divided by criteria of culture, colour and religion; on the contrary, respect for democratic institutions, equality and justice is the basis of coexistence. Therefore, the solution of the Cyprus problem, i.e. the formation of an institutional framework for the coexistence of two communities of different religions and ethnic groups under the same state -Cypriot and European- can be an act of resistance against a galloping and threatening nationalism.

Some argue that "no solution" on the Cyprus issue is always the best solution. Do you share that view?

Not at all. First of all, by adopting this view, we accept the consequences of the post-colonial period, of ethnic conflicts and, above all, of the Turkish invasion, as something that happened "naturally", without political intervention. As a result, we passively comply with the notion that at this very intense historical moment in time, when problems in the Middle East and Turkey create a framework of instability, Cyprus -at least part of its area- is prey to this instability.

This means that we accept that Cyprus is potentially a gate to the importation of this instability onto European soil. In reality, allowing almost half of the territory of a European area to be outside European control and outside the control of the Cypriot state is not a good sign for the future, particularly at this time when the future does not seem so peaceful.

What is your view on the implementation of the agreement signed between the EU and Turkey on 18 March 2016 on the management of refugee flows?

This agreement could show that Europe is cooperating with neighbouring countries in order to solve a serious problem, a humanitarian problem, in order to more efficiently protect refugees from traffickers etc. However, this agreement is not the result of a humanitarian policy but an emergency management policy, dictated by the rationale of retaining the problem outside European borders. The European Union, which is very effective at imposing economic regulations, proves uninterested in applying humanitarian rules with the same zeal. So the European Union has capitulated to the threats and nationalist policies of member-states that do not accept refugees on their soil, but refuses to deviate somewhat from its economic rules when it comes to countries like Greece, which face a humanitarian crisis and which, at the same time, provide a humanitarian roof for refugees.

*Interview by Irini Anastopoulou, translated to English by Ioulia Livaditi