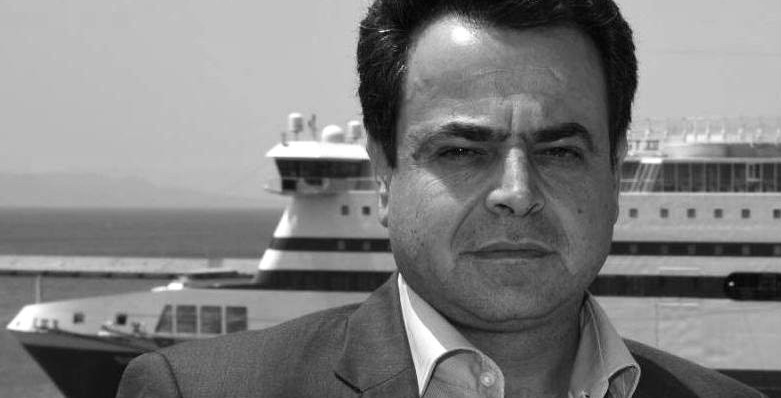 Nectarios Santorinios, Deputy Minister of Maritime Industry & Island Policy and MP for the Dodecanese with SYRIZA, spoke to Greek News Agenda* on the need for an insularity clause at the national and EU level to ensure the equitable development of island regions, the government's effort to modernize the current institutional framework in order to tackle issues such as the islands' connection to the mainland, transport, accessibility to public services, and supply of goods. Santorinios further mentioned several government projects such as the Special Development Plan for North & South Aegean that will finance major infrastucture projects, or the target to achieve water autonomy for all islands by the summer of 2018.

Historian Ruggiero Romano and other thinkers, such as Spyros Asdrachas and Angelos Elefantis, viewed the Aegean archipelago as a dipersed city.  Insularity is a salient morphological feature of Greece. What are its specific characteristics in Greece?

The blend of characteristics that make up insularity, a concept sometimes grueling, other times redeeming, are essentially small size, long distance from places of supply of goods, seasonality in social and economic life and vulnerability to environmental challenges.

The view of the Aegean as a kind metapolis, the promise of a different kind of city, is based on island features, such as their encirclement by the sea, the arid, dry landscape, the clarity of the sky and the seasonality of their visitors. We must keep in mind though that a major characteristic of urban centers is that they function as melting pots, merging various civilizations together. In the Aegean islands, however, one can find different cultural elements like costumes, dances, products and folk speech that have been preserved in time, precisely because of the lack of connections with the mainland or the neighboring islands.

What are the main challenges insular countries like Greece have to face? How have are they been dealt with so far from a policy point of view?

The challenge all island regions face is depopulation. The same applies to Greece, of course. Especially in times of economic recession, this trend is widening. Fortunately, we are essentially talking about islanders, people who have a particular emotional connection to their homeland, even though they travel more often than most of us; however, we cannot rely on this connection to curb the phenomenon of depopulation.

What we have to do is respect it practice the islanders΄ longstanding demand for equal social treatment: this is both a challenge and a mission for the ministry of Maritime Affairs and Island Policy. The islanders’ particular living conditions require special considerations from the part of the state. That is why we are talking about an insularity clause that would ensure that any law of the Greek state or the EU must be adjusted so that it can be applicable to island life.

What is the European dimension of the issue of insularity? EU cohesion policies are designed for land territories and Greece is a country with 277 inhabited islands. How can island regions be developed on an equal footing with land regions?

In the Treaty of Lisbon, the objective of strengthening economic and social cohesion is described as:  “The EU shall aim at reducing disparities between the levels of development of the various regions and the backwardness of the least favoured regions.  Among the regions concerned, particular attention shall be paid to rural areas, areas affected by industrial transition, and regions which suffer from severe and permanent natural or demographic handicaps such as the northernmost regions with very low population density and island, cross-border and mountain regions.” 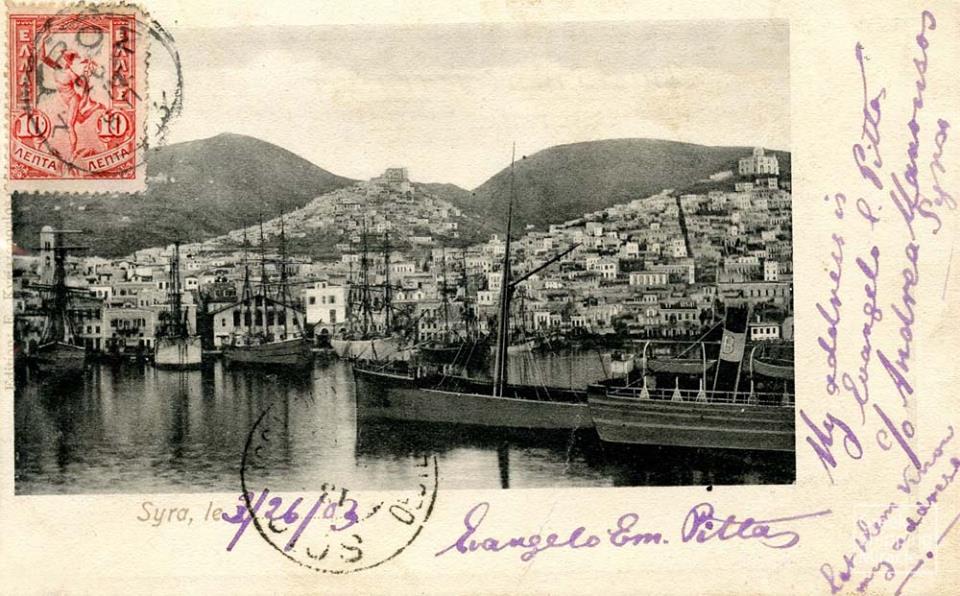 Postcard: The port of Hermoupolis on the island of Syros

Therefore, cohesion policies based on modern tools and indicators, such as the human development index, the social welfare index and the regional competitiveness index are key for the equitable development of island regions.

Another defining factor for linking the Greek islands to the European commerce flow are trans-European networks.  In Article 170 of the Treaty on the Functioning of the European Union (2007) it is mentioned that, “the Union shall contribute to the establishment and development of trans-European networks in the areas of transport, telecommunications and energy infrastructures.”

Furthermore, in article ΙΙΙ-144 of the Draft Treaty Establishing a Constitution For Europe (2003) it was mentioned that “Within the framework of a system of open and competitive markets, action by the Union shall aim at promoting the interconnection and interoperability of national networks as well as access to such networks. It shall take account in particular of the need to link islands, landlocked and peripheral regions with the central regions of the Union.”

One big concern for smaller islands is infrequently serviced lines during off-season periods. What are the solutions you propose?

At present, through state subsidized lines, the so-called "nonprofit” lines, we ensure - although at a great cost- that each island will have a stable, and as much as possible frequent connection to the major ports of the country.

However, this policy is under review and the institutional framework is being modernized along the following axes: Improving accessibility through better interconnection with the mainland, optimizing the design of the coastal routes in order to reduce the cost of nonprofit lines, striking a better balance between passenger and freight traffic, strengthening commercial and tourist activity and promoting combined transport.

The Valetta Declaration, adopted this March, mentions “equal growth for islands and insular regions.” What are Greece’s goals as far as insular policy in the EU after the Maltese Presidency?

The objective remains to create a common framework for island policy at the European level, in accordance to Article 175 of the Treaty on the Functioning of the European Union for “reducing disparities between the levels of development of the least favoured regions” such as islands, as that will lead to the adoption a separate package of actions to tackle the issue of insularity.

Fields that call for direct developmental interventions are education, health, administration, entrepreneurship, basic infrastructure and the transport of islanders.

What are your plans and priorities for this year?

For the current period, the Government's plan is focused on promoting economic and development opportunities for the islands. More specifically:

The Special Development Plan for North & South Aegean, with an initial budget of 50 million by the National Investments Programme, is going to finance major infrastructure projects for the islands.

The Ministry of Maritime Affairs and Islands Policy collaborated with the Ministries of Development, Infrastructure and Home Affairs, to create a dedicated unit that will support the municipalities of small islands in designing and completing infrastructure projects using the NSRF, the National Investments Programme and other funds.

On the initiative of the Ministry of Digital Policy, Telecommunications and Information, and in collaboration with the Ministry of Maritime Affairs and Islands Policy, a program to improve public administration in the islands and make islanders’ access to public services easier is being implemented.

For a better balance in the supply of goods, a collaboration has been launched with the University of the Aegean to prepare a study which will set down ways to reduce the cost of transporting people and goods to and from the islands.

The Ministry of Energy, in cooperation with Ministry of Maritime Affairs and Islands Policy has introduced the innovative concept of “energy communities” in a draft bill currently under consultation. We aim to promote such projects so that islands can become energy self-sufficient.

However, the most important and urgent task is achieving water autonomy for the arid islands. By the summer of 2018 we plan to have a desalination plant on each island, providing sufficient drinking water for the needs of the island so that water tank become a thing and local communities start examining more advanced forms of water supply for the future. 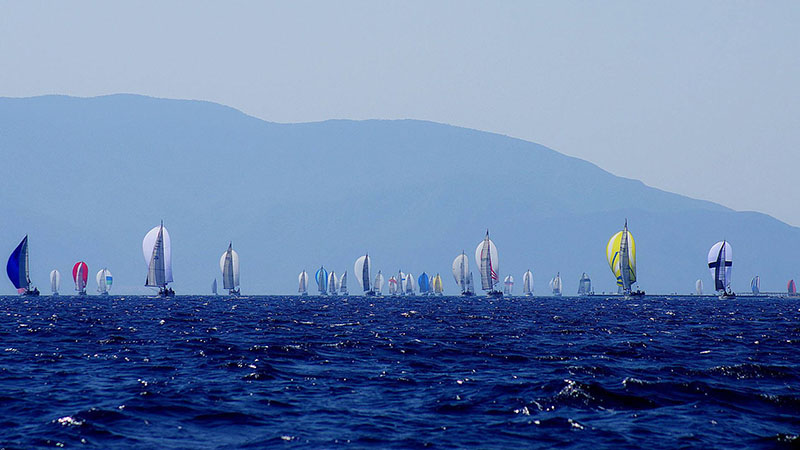 The top international sailing event in Greece, the Aegean Regatta is organised by the Ministry of Maritime Affairs and Island Policy