Secretariat General for Media and Communication of the Ministry of Digital Policy, Telecommunications and Media and Open University of Cyprus – Advanced Media Institute co-organize the "Media, Polis, Agora: Journalism and Communication in the Digital Era" AmiRetreat Conference 2018 from 27th to 29th of September in Thessaloniki, Greece. This interdisciplinary conference aims to bring together scholars, professionals and practitioners from diverse fields to discuss the dynamic interplay of politics (polis), journalism and communication (media) and the public sphere (agora). 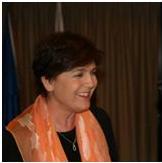 Has the Postgraduate program (MA) “Communication and New Journalism” of the Open University of Cyprus achieved its main goals in the field of academic research, as well as to prepare journalists for the current media market that goes through a crisis?

When we first initiated the program, the two skills that we deemed necessary for today’s journalists were resiliency and flexibility. The media field is ever-changing and crisis is affecting the profession in multiple ways. Every year, following the new trends and listening actively to the needs of the civic society, we adjust our curriculum accordingly. We give our students the opportunity not only to develop critical thinking on classical and more modern media and communication theories, but to practice methodologies and tools. Our stuff combines academic and media/ communications professional qualifications, bridging an existing gap in most journalism schools. We produce academic content, researching critical topics such as safety in journalism and, at the same time, we train the future leaders on media and communications.

The main issue is that, although we feel satisfied by the progress of the program, we never stop questioning, changing and disrupting the status quo in academia and in practice. We never rest, we continually build strong collaborations with international universities, research centres and organizations, in order to contribute to the improvement of our program and to stay competitive offering a relevant curriculum.

What was the underlying principles of your initiative to organize annual Retreat Conferences on emerging digital media issues since 2016 in Greece and Cyprus (Athens, Limassol, Thessaloniki)?

Advanced Media Institute and the Postgraduate Program “Communication and New Journalism” are two vibrant stakeholders in the media ecosystem in Greece and Cyprus. We couldn’t imagine ourselves abstaining from the important discourse on the future of journalism and communications. We focus on being a well-established think tank, a changing catalyst for the advancement of media, not only in theory, but in practice as well. In this context, we invite every year (since 2016) international and local “players” to share experiences, exchange knowledge, discuss, agree and disagree on flaming issues of our field. We are happy to leave our footprint, through our conferences and publications, inspire others and also give something back to our students, academic stuff, researchers and other partners to trust us. We aspire to challenge, provoke and stir up interest in how we can make journalism viable and trustworthy again. (149)

AmiRetreat Conference 2018 is tittled “Media, Polis, Agora: Journalism and Communication in the Digital Era” and will be held from 27th to 29th of September in Thessaloniki.  Would you elaborate on the title and the programme of the Conference?

In a joint effort to redefine journalism, the main aim of this interdisciplinary conference is to explore the possibilities of a new modus vivendi between traditional and new media, journalists and academics, institutions and media companies.

The conference aims to bring together scholars, professionals and practitioners from diverse fields — including journalism studies, media and communication studies, political communication, sociology, critical humanities, policy and governance studies, technology studies, and cultural analysis– to discuss the dynamic and continuous pivotal interplay of politics (polis), journalism and communication (media) and the public sphere (agora). The conference will further discuss the challenges that the advancement in digital journalism, ethics and content creation, mediated public discourse, new media and positions, as well as mediated political, public and civic action bring to those three spheres.

Equally important, the conference seeks to build bridges between academia and the world of journalistic, media and political practice through several initiatives. The first one involves journalists or/and media professionals, where in each one of the three two-hour panel, they are expected to focus on whether there can be a trustworthy public speech, highlight the role of the producer and content manager, promote new forms of storytelling and highlight changes in the field as a result of technology advancements. The second initiative aims to bridge the academics with the journalists. In each two hour panel, academics are expected to highlight the links between theory and practice.

Media and communication field’s purge should always be a collaborative effort. It is very important to have members of the Greek Secretariat General for Media and Communication of the Ministry of Digital Policy, Telecommunications and Media, not only as supporters, but as active and engaged participants to our Conferences.

Media owners, journalists, academia and government should sit together and co-create the new operational models for current media. Without interfering with content production, ministries and other authorities have the power to facilitate the wellbeing of media industries. The Greek example experienced governmental interference for many years before the private sector made its appearance. It’s very hard indeed to try to regulate the field without being part of the ecosystem, without understanding the actual needs.

*Interview by Dr Aikaterini Lambrou, Head of the Press and Communication Office of the Embassy of Greece in Cyprus