POEM OF THE MONTH: "Postscript" by Takis Varvitsiotis 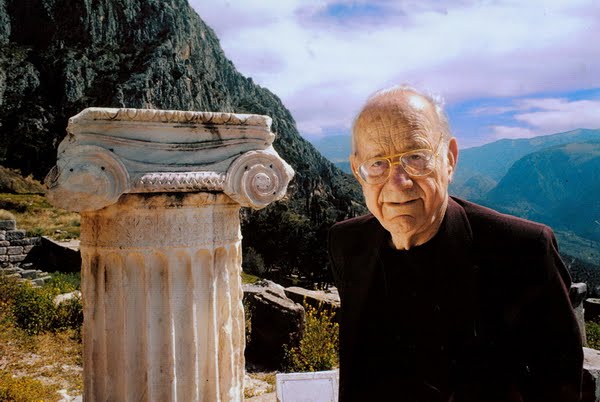 Takis Varvitsiotis was born in Thessaloniki in 1916. He studied law at the Aristotle University of Thessaloniki and began working as a lawyer in 1940. He published his first poems in the magazine Macedonian Days in 1936 at the age of twenty, and the first of his 22 in total poetry collections in 1949. He was also a distinguished essayist and translator of works by celebrated French, Spanish and Latin American poets, such as Baudelaire, Lorca, Apollinaire, Mallarmé and Neruda.

He was the most awarded Greek poet of the post-war period, who received international acclaim. Greek Nobel laureate Odysseas Elytis had described Varvitsiotis as "a European poet of a rare sensitivity and a profound connoisseur of lyric verse, who deserves the praise, not only of his homeland, but of cultivated people around the world".

His work has been translated into Spanish, English, French, German, Romanian and Bulgarian, and he has been honored with numerous awards including the City of Thessaloniki Poetry Prize (1959), the Academy of Athens Poetry Prize (1977), and the state National Prize for Poetry (1985).

He was also awarded the international Fernando Rielo World Prize for Mystical Poetry (New York, 1988), the title of Chervalier / Ordre des Arts et des Lettres by the French Ministry of Culture (1989) and the prestigious international Herder Prize (1994) as "a representative of that multitude of Greek poets who has contributed in a vital and unforeseen way to the world literature of our times … finding recognition outside his homeland".

Varvitsiotis represented Greece in literary conferences around the world, and visited renowned institutions such as Harvard, Princeton and Yale universities, for readings of his poetry.

The poet had also collaborated with Thessaloniki’s legendary post-war literary magazines Kochlias and Morfes; for the younger generations of writers and poets, Takis Varvitsiotis served as a treasured point of reference, a poetic compass, as he was the last living poet of the city’s old literary tradition.

Takis Varvitsiotis’ poetry is lyrical and insightful, bearing influences from neo-symbolism and celebrated French surrealist poets Paul Éluard and Pierre Reverdy. As noted by Costas Stergiopoulos, a prominent writer, critic and scholar of the first generation of post-war poets, Varvitsiotis’s poetry "…eliminates the material resistances and the weight of things, so that they can be projected in their dreamy substance, revealing an image of the world more beautiful. Thus, life viewed through the prism of his art eliminates its cruelty and resolves contradictions".

Takis Varvitsiotis remained devoted to poetry throughout his life, leaving an enormous oeuvre that has put its stamp on Modern Greek literature.