Greece is exhibiting its tourism offerings at the ITB Berlin, taking place March 9 to 13, as the leading trade fair for the worldwide travel industry marks 50 years.

The Greek National tourism Organization (GNTO) and its co-exhibitors — Greek regions, hotels, travel agencies, tour operators, etc. — have invited all to visit the Greek stand in Hall 2.2/101and get acquainted with the country’s holiday destinations and tourism products. The stand offers the opportunity to visitors to sample the country’s gastronomy and regional products, as cooking shows by top Greek chefs will be held every day at the Greek stand. Over the weekend, music performances will take place while lucky participants will win in a draw prizes offered by Greek exhibitors. The Natural History Museum of the Lesvos Petrified Forest  has its own stand at the World Geoparks Network.On Friday, March 11, representatives from the GNTO and the City of Athens will take part in the documenta 14 press conference “From Athens to Kassel – and back again”, on the major art event that has been based in the German city of Kassel since 1955 and which, in2017, will be held for the first time in two places: its original venue and Athens. 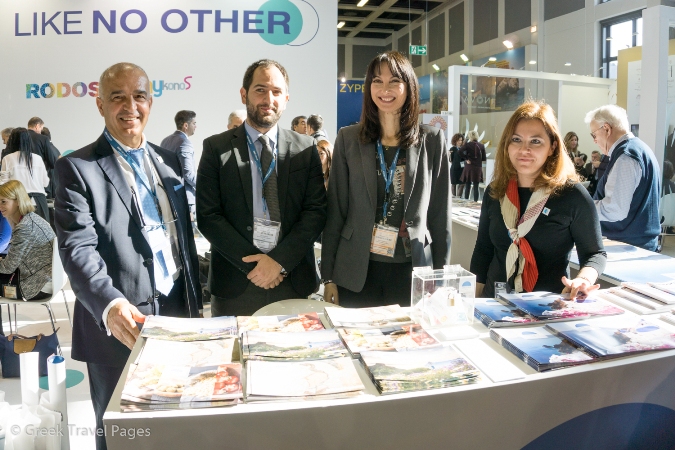 Attending the ITB and meeting with major tour operators and journalists of the German media, Alternate Tourism Minister, Elena Kountoura, is promoting Greece’s tourism action plan in view of the new season, which sets out a series of actions required in order to strengthen market share, secure revenue growth and assist the country’s islands that are under pressure due to refugee flows.  Among other goals, Greece aims to national agreements with major tour operators in Europe and Russia to boost arrivals, extend the season and introduce new Greek destinations, attempts to enter new markets with direct flights to China, Korea, Middle East and USA for the summer season and upholds a special promotion for the islands of Kos, Samos, Lesvos and Chios, that are under pressure due to refugee flows. According to Andreas Andreadis, head of the Greek Tourism Confederation (SETE), tourism revenues are expected to grow in 2016 to 15 billion euros on the back of 25 million visitors and 2.5 million cruise ship arrivals, but this growth hinges on a swift conclusion of the country's bailout review and an efficient handling of refugee crisis.