The Modern Greek Studies Association (MGSA) is an organisation founded half a century ago, in 1968, by a group of intellectuals and scholars (Americans and Greeks in America), to showcase the merits of the modern Greek tradition and contemporary Greek culture. The MGSA has since grown to be non-profit academic organization, dedicated to the promotion of Modern Greek Studies in the United States and Canada and conversant internationally on all issues, historical and contemporary, which pertain to Greek matters.

The MGSA defines its scope broadly to include not only post-independence Greece but also the period of Ottoman rule and the later Byzantine Empire, as well as those aspects of early Byzantine, Hellenistic, and Classical times that have a bearing on the modern period. The Association is also committed to an interdisciplinary approach to all things Greek; this includes an explicit commitment to engage questions emerging from Greek diaspora conditions and the Greek-American experience.

Its membership, which currently exceeds three hundred, consists primarily of teachers, students, and professional scholars, many of whom reside in various parts of the world, including Greece. Since its establishment, MGSA’s activities have been extensive; these include a biennial symposium and various publications, while it also serves as an information and communications centre for all persons seriously interested in the study of Modern Greece. 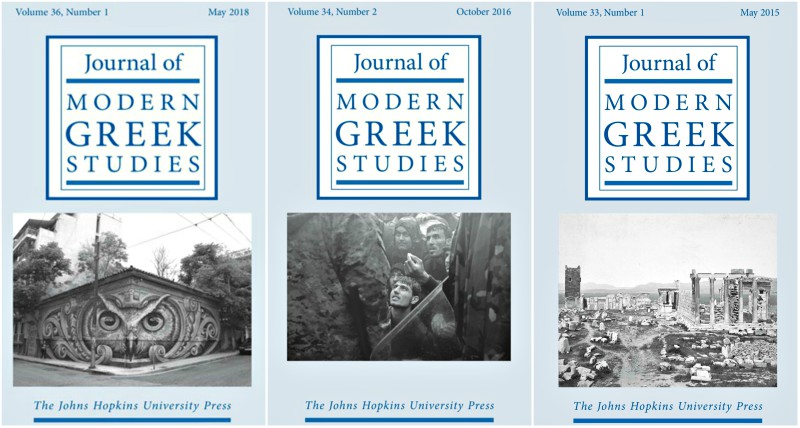 The MGSA sponsors the publication of the Journal of Modern Greek Studies (JMGS), a biannual periodical -the only one to focus exclusively on Modern Greece- published by Johns Hopkins University Press, which features essays by leading scholars in the field of Modern Greek Studies from North America and around the world. Focusing on a broad historical expanse that stretches from late Byzantium until the present, the JMGS is highly interdisciplinary, publishing peer-reviewed articles from scholars who represent a diversity of fields within the humanities, the arts, and the social sciences.

The latest issue of the JMGS (Volume 36, number 1) came out in May 2018. Some of the articles featured are: “Not Text but Texture: C.P. Cavafy’s Poems Unread, Unfinished, Unwritten” by Alexander Nehamas, “‘This Wonderful People’: Darwin, the Victorians, and the Greeks” by Ageliki Lefkaditou, “SOE in Wartime Crete: An Instrument of Control” by Sean Damer and Ian Frazer, and “Constructing Modernity from Its Borders: Muslim Minority Women’s Encounter with Education and Assisted Reproductive Technology in Modern Greece” by Pinelopi Topali and Effie Plexousaki; the issue also includes several book reviews.

The MGSA sponsors other publications as well, such as its annual Bulletin and a variety of bibliographies, collections of essays, and occasional papers; the 2018 MGSA Bulletin is available to download in pdf. The association also holds various prize competitions for books, dissertations, translations, and graduate student essays.

Every two years, since 1969, the MGSA convenes an international symposium, hosted at various North American locations, which attracts hundreds of scholars from around the world. The MGSA symposium, the oldest and largest of its kind in the world, provides a unique forum for current research and new ideas. Over the years it has started welcoming graduate students, often giving them their first exposure to the field as well as to disciplines outside their own. The 26th Symposium will be held at the California State University in Sacramento, on November 7-10, 2019; the call for papers will be posted by summer 2018. On the opening night of the Symposium, the MGSA will announce the winners of its prize competitions.

The MGSA also organises the Greek Language Pedagogy Workshop, a biennial event offering a working weekend on university-level Greek language instruction focused on a select topic. The MGSA’s Undergraduate Studies Committee determines the subject and presenters of each workshop, which is free and open to the public. The 8th biennial Greek Language Pedagogy Workshop, which is set to take place at Columbia University in New York on November 2-3, 2018, will be devoted to the topic of “The Future of Modern Greek Language Learning and Teaching in Higher Education in the USA: Opportunities and Challenges.”

Through its website, the MGSA also provides access to several online portals, aiming to help academics, students, and cultural producers to find information on on research, activities, and resources in the field of Greek-American Studies broadly defined. The most prominent one is the Greek American Studies Resource Portal, which provides information about the latest scholarship but also about films, documentaries, novels, poetry, popular history, autobiographies, and blogs. Other portals include Women in Greek Society, Greek American Resources Archive and Fellowships Listings.