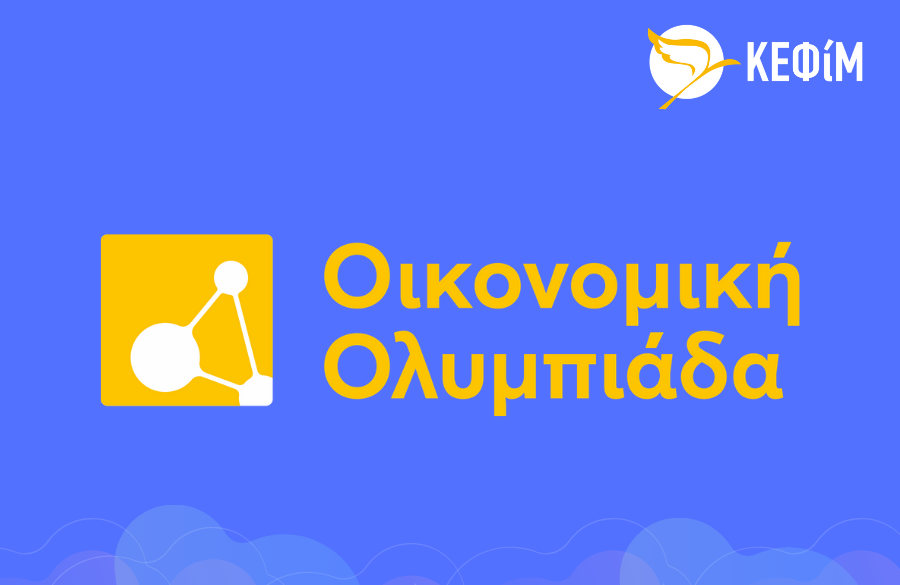 The Center for Liberal Studies - Markos Dragoumis (KEFiM) and the Secretariat General for Public Diplomacy and Greeks Abroad of the Ministry of Foreign Affairs are honored to announce their collaboration in organizing the Economics Olympiad, an international knowledge competition in economics and finance for high school students, which will this year accept applications from Greek schools abroad. The aim of the Economics Olympiad is to promote economic literacy among young people.

The Economics Olympiad is organized by KEFiM in collaboration with the Czech Institute of Economic Education (INEV), responsible for the international part of the competition. Greek schools from around the world will for the first time be able to take part in the competition, following a proposal by the Secretary General for Public Diplomacy and Greeks Abroad, John Chrysoulakis.

This educational initiative aims to contribute to the better preparation of young people in managing personal financial issues, understanding the functioning of the world economy, shielding against populism, and preparing for an effective and informed contribution to public affairs.

Noting the importance of the initiative, the Deputy Minister of Foreign Affairs, Mr Konstantinos Vlasis, remarked: "The Economics Olympiad is an outstanding international initiative, which aims to contribute to the further development of skills and to cultivate students’ knowledge in economics and finance. This year, we are pleased to announce that through the collaboration of the Secretariat General for Public Diplomacy and Greeks Abroad with the Center for Liberal Studies – Markos Dragoumis (KEFiM), students from Greek schools abroad can participate in the competition. During these difficult times, we are doing all that we can so that the Greeks of the Diaspora could come closer to their homeland in every possible way. I hope the children of the Greek Diaspora will embrace the competition by taking part and I wish from the bottom of my heart that they excel!"

Particularly mindful of issues relating to the education of expatriate Greeks, the Secretary General for Public Diplomacy and Greeks Abroad, Mr John Chrysoulakis, noted: "For the first time, the children of Greeks abroad are given the opportunity to participate in the Economics Olympiad, an exceptional knowledge competition in economics and finance, emphasizing the potential of Ecumenical Hellenism. This collaboration forms part of the general framework of aspirations of the Secretariat General for Public Diplomacy and Greeks Abroad, to institutionally promote a connection of all Greek schools, inside and outside Greece, in joint actions".

Commenting on the project, Mr Panagiotis Liargovas, Professor at the Department of Economics at the University of the Peloponnese, President of the Center for Planning and Economic Research (KEPE) and a member of the Scientific Committee of the Economics Olympiad, noted: "KEFiM’s initiative to organize the Economics Olympiad in Greece is very important and more necessary than ever in the present situation. Faced with a rapidly changing and connected economic environment, young people need space and incentives to develop their financial knowledge, which will enable them to better understand and manage modern economic challenges."

The Greek Economics Olympiad is held under the auspices of the Ministry of Education and Religious Affairs and the Institute of Educational Policy and with the support of the Bank of Greece. The Scientific Committee of the Economics Olympiad includes distinguished economists from academia and the business world. The competition consists of four parts:

School round: It is organized at the school unit level by the responsible teacher with the support of the Economics Olympiad team and is conducted online.

Regional round: Coordinated by KEFiM in collaboration with the local authorities and the partners of the Economics Olympiad in each region.

Final: Organized by KEFiM. This year's final will be held in Athens.

International final: The five best performers advance to the final of the International Economics Olympiad to be held early in the next school year in one of the participating countries.

Learn more about this year's event on the website of the Greek Economic Olympiad, including the detailed program of this year's competition.

Read also via Greek News Agenda: The Greek language around the world! staellinika.com; PublicDiplomacy Talks | Beyond archaeology and tourism: A new image for Greece, in the post-pandemic world?