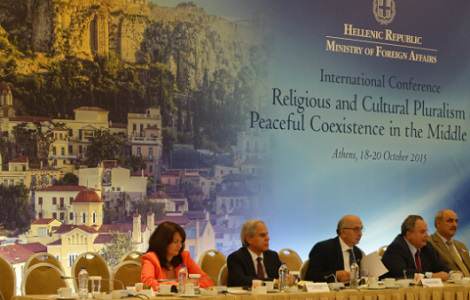 In October 2015, on the initiative of Ministry of Foreign Affairs, an International Conference on "Religious and Cultural Pluralism and Peaceful Coexistence in the Middle East", took place in Athens. With an eye on the refugee question and the exodus from the conflict region, the Ministry of Foreign Affairs called political and religious leaders of all denominations and cultures from the Near East and Europe – Christian Muslim and Jewish – as well as academics and representatives of civil society, to join forces, adding their voice of authority to calls for tolerance in the Middle East. Participants in the Conference included Foreign Ministers, heads of Christian Churches, religious leaders and figures of the Muslim and Jewish worlds, as well as distinguished representatives of international politics, the academic community and civil society.

The participants highlighted the need to remain vigilant and exchanged ideas on a Greek proposal for the establishment of a follow up mechanism in Athens. This mechanism in the form of the recently established Centre for Religious Pluralism in the Middle East (CRPME) would examine the situation, in terms of freedom of religion or belief and cultural pluralism, codify the various problems and elaborate on concrete proposals and viable solutions.

In accordance to the spirit of the Athens International Conference, CRPME will organise regular meetings with political and religious leaders, as well as with the academic and NGO community. The meetings will take place in Athens and in the broader region, addressing issues on the spot and putting forward proposals for viable solutions. Within this framework, CRPME will seek the greatest possible synergy and cooperation with other related international initiatives to provide an even greater momentum in the common effort towards religious pluralism in the Middle East.

In Greece, the dialogue and academic debate on Muslim world in the Middle East has included various schemes and initiatives. Leading among them is the Center for Mediterranean, Middle Eastern and Islamic Studies (CEMMIS) established in 2008 by a group of young scholars, researchers, postgraduate and graduate students headed by Professor Sotiris Roussos, which focuses on Muslim societies and communities in South Asia, Africa and Europe.