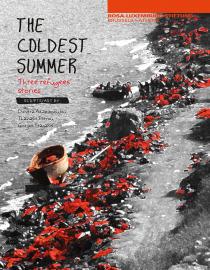 Autobiographical narratives of Syrian and Afghan refugees about their perilous journey to Europe via Greece have artfully been transformed into comics in the illustrated edition “The Coldest Summer – Three Refugees’ Stories” by Dimitra Adamopoulou, Thanasis Petrou, Yiorgos Tragakis, was recently published by the Athens Office of the Rosa-Luxemburg-Stiftung Foundation.

“The Coldest Summer”, based on interviews with refugees in Athens and in Berlin, documents the conditions they experienced in their countries, the trafficking risks, the difficulties in  crossing the Aegean sea from Turkey to Greece, the bureaucratic nightmare and the cruel treatment by some European authorities, the closed borders and slammed doors they encountered in Europe.

As Rosa-Luxemburg Foundation puts it, “the protagonists of the stories are common people who could have been members of our family, our friends or our neighbours, and who, some day, will be recognised as fellow human beings in our societies and in our spaces” […]  “A working mother, a working father and two children who are forced to struggle to survive, to leave their homeland because it has become too dangerous, to abandon the life they knew as it had become unbearable, and leave their families behind in the pursuit of a life where they can think beyond the next day or month and in which they will be able plan a future in peace: to work, study and live among us with equal access to democracy, social rights and culture.”

Real stories told by real people were turned into comics in order to retain the narrative detail and avoid excessive drama. The script/art illustrations were made by Dimitra Adamopoulou, Thanasis Petrou and Yiorgos Tragakis and the volume also includes a literary text and two short essays on migration. The three stories move the reader and raise sympathy for the refugees, while the accompanying text offers more information on the hardships of the migrants’ journey, the restrictions on their movement and the inability to integrate into European society, which trap them as a cheap workforce in a system of illegality and inequality.

This publication is available for free in English and in Greek.