In this week's Events & Culture Agenda: “Ellados Gefsi” Gastronomy Festival, the OUTVIEW film Festival, the 11th annual Comicdom Con Festival, “Children on the move” photographic Exhibition and a Conference on New Media and Entrepreneurship in Tourism.

In “Ellados Gefsi” Festival the organizers will present a complete taste of Greece in 4 days, with the Greek Gastronomy, the Greek Culture and Tourism in Greece being used as their basic “ingredients”. Running from April 15-18, the Festival, which is sponsored and supported by the Greek Ministry of Tourism, the Greek Ministry of Foreign Affairs, the Greek Ministry of Rural Development and Food, The Greek Tourism Organization, the General Secretariat for Greeks Abroad, and the Municipality of Peristeri, is promoting the productive, the touristic and cultural side of Greece with Greek Regions and Greek companies participating. At the same time, the organizers are offering the possibility for participants to take part at B2B meetings and discover numerous promising business opportunities as well as getting acquainted with top quality Greek products and services.

The Outview Film Festival 2016 is the International LGBTQI+ Film Festival of Athens, the largest cinema event of its kind in Greece and the 4th largest Greek Film Festival, with the support of the American Embassy, the Embassy of Israel, of Sweden, of Norway and the embassy of Holland and wide media coverage. Every year since 2007, the “Outview Film Festival” hosts European and Global Film Premieres, famous guests from the world of film and art, masterclasses, film awards and a very large number of visitors. Running from April 14 till April 24th, the festival is offering public screenings of LGBTQI+ films, meetings with local as well as foreign filmmakers, panel discussions and special events. The impressive program includes many exciting films while aspiring to enrich and empower tolerance and pluralism in Greek society. 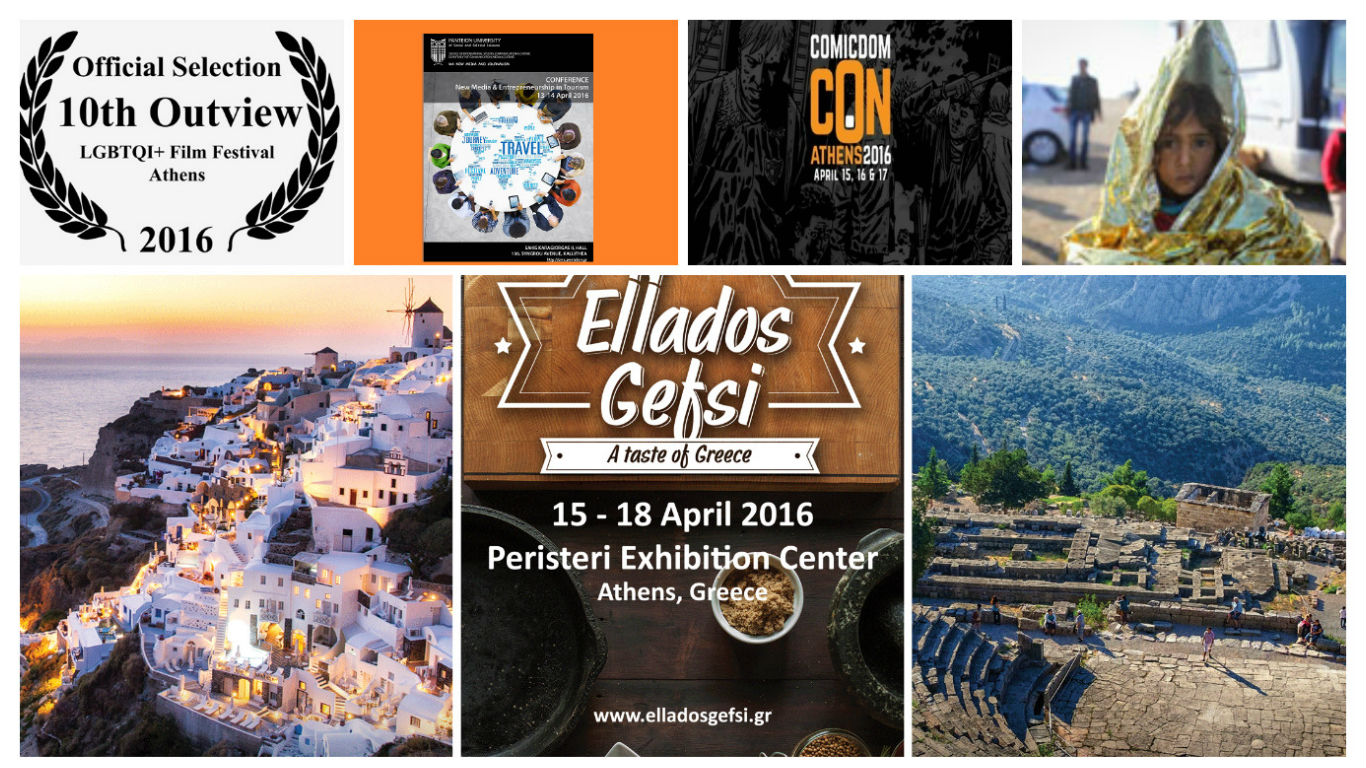 The 11th Comicdom Con Athens 2016, organized by the non-profit organization Comicdom Press, the Hellenic American Union and the French Institute Of Greece, will take place in Athens on April 15-17 2016. The three-day comics festival will be hosted at the main building of the Hellenic American Union (22 Massalias str) as well as the French Institute of Greece building (31 Sina str). Since 2006, at this event which is based on the standards set by international comics conventions, the Greek audience is introduced to one of the most interesting Art Forms through the presence of famous international guests, original art exhibitions, sketch events, panels, screenings, workshops on comics and related arts, panels, Greek publishers spotlights, publishers & retailers bazaar, and the Greek Comics Awards (replaced the Comicdom Awards in 2015), the only ones of their kind in the Greek comics industry, where an Academy of comics professionals and specialists honors the best works and creators of the previous year.

A two day conference running on April 13 and 14, on “New Media and Entrepreneurship in Tourism”  organized by the Department of Communication, Media and Culture of Panteion Universityof Social and Political Sciences, addresses the issue of how New Media and Social Networking are changing traditional forms and methods of communication, thus creating a new framework for the promotion of tourism products. At the same time, it explores the new forms of entrepreneurship that have emerged, focused on innovation and the creation of applications that promote tourism through the net and mobile platforms. The conference aims to analyze and discuss these new phenomena, the challenges and opportunities in the fast evolving field of tourism. On the second day of the event, a session will be dedicated to Athens City Break Tourism a number of presentations by distinguished guests.

Born in Bangladesh, photojournalist GMB Akash has been honoured with more than 100 international prizes for his determination to show the beauty of the human spirit, to give a voice to the voiceless and have it heard around the world. This dedicated work inspired an exhibition at the Benaki Museum, which will run from April 20th until May 22nd, with the collaboration between the Foundation Archives + Production of Contemporary Art (APCd) and “Merimna”, a Greek non-profit organization, dedicated to supporting children who experience life losses.  The purpose of this exhibition is to awaken the viewer to the immense challenges encountered by refugee children who are forced to migrate in search of safety and hope and, at the same time, to advocate for their undeniable right to live a dignified life in a world that recognizes and respects their rights and needs. This exhibition is also a story of friendship between people wishing to show the "unspeakable" and to pay tribute to the invincibility of the human spirit