The worker-managed factory Vio.Me. in Thessaloniki is probably the most successful self-management experiment in Greece and it has grown into a symbol and inspiration for self-management for workers internationally.

The factory, originally founded in 1982 as a subsidiary of the Philkeram-Johnson Industrial group -a successful Greek conglomerate that used to employ 350 people and export to 29 countries- manufactured different types of building materials. From 2000 to 2006, it was one of the 20 most profitable industries in Northern Greece, but in 2010 the company presented a negative balance sheet and started delaying the payroll of the workers. In May 2011, the company stopped payments altogether and shortly later filed for bankruptcy, resulting in the firing of its more than 70 workers. In October of the same year, the general meeting of the workers’ union decided with an overwhelming majority of 97% to take control of the factory.

As Theodoros Karyotis repoted on the story for website Worker’s Control: “Forty of its workers, organized horizontally in a primary workers’ union, occupiedthe factory, located in the outskirts of Thessaloniki, to prevent the employers from taking away the machinery before paying the workers the nearly €1.5 million owed in salaries and compensations. After one year of unfruitful contacts with the Ministry of Labor and the central trade unions, the workers of VIO.ME , announced in July 2012 their intention to self-manage production in the occupied factory, with the slogan: ‘If you can’t do it, we can.’ 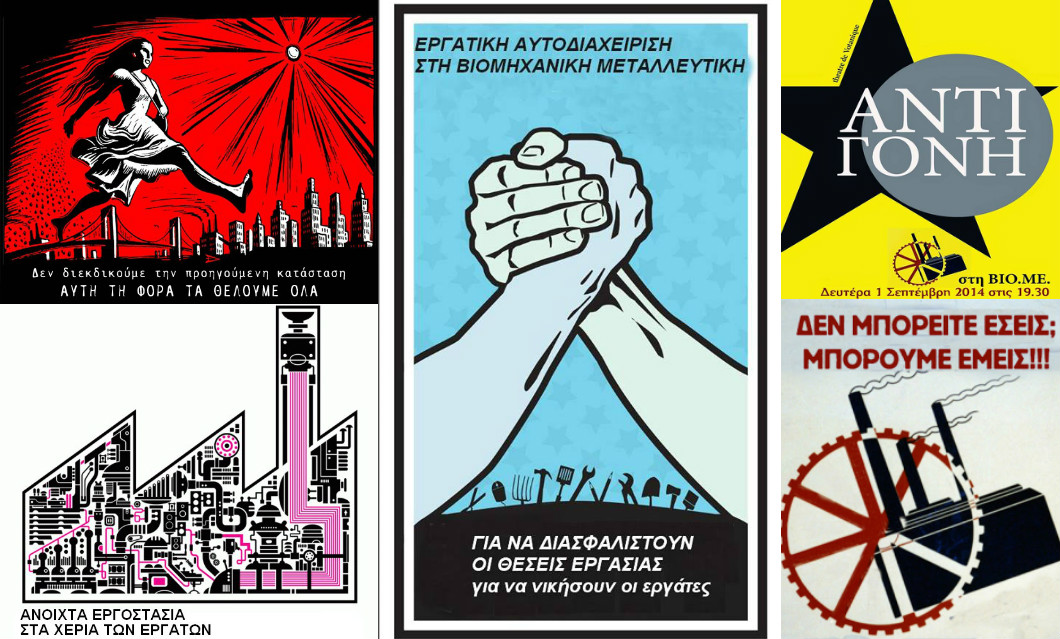 A constellation of grassroots initiatives, political groups, primary trade unions and individual activists, inspired and motivated by the workers’ initiative, came together to form a wide and active solidarity movement. There was also extensive international networking and a constant flow of sharing and solidarity with similar initiatives, especially the ones in Argentina.

The road ahead was not an easy one, however, on the 12th of February 2013, after three days of intense mobilization, including a benefit concert attended by 6.000 people, production restarted under workers’ control. The workers developed and produced a new range of environmentally-friendly cleaning products that was easy to finance, was produced using local and natural ingredients, and was distributed through the channels of social and solidarity economy, a natural ally of Vio.Me. since the very start.

In April 2014, after overcoming several legal and bureaucratic hurdles, the workers formed Social Cooperative Enterprise, based on the principles of collective decision-making through the workers’ assembly, collective ownership of the means of production, and non-profit operation, as any surpluses will return to the wider community. For many, the factory represents a new way forward for unemployed workers in Greece – seizing the means of production, running factories without bosses, producing only goods that are needed, and distributing them through solidarity networks.” 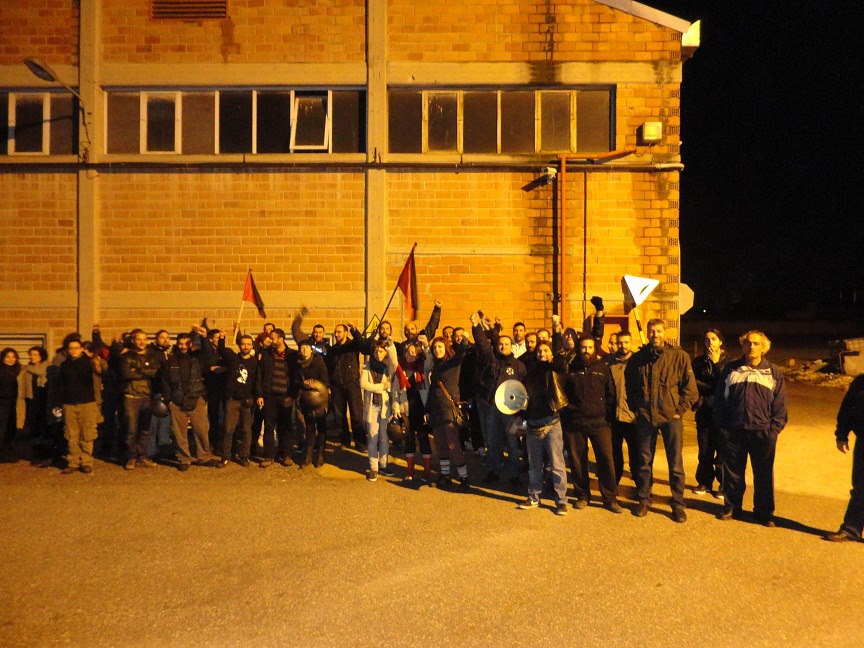 Apostolos Karakassis, the director of a 2015 documentary on the struggles of the Vio.Me. workers titled “Next Stop: Utopia” says: “Workers with no work experience outside the production line, driven by despair, decide to start a small revolution, just for a chance to win back their lives. They want to establish an island of utopia in a capitalist environment and of course they meet a thousand obstacles and conflicts at every level.

They are going against the law, the judicial authorities and the factory’s ex-owners, while they fight to gain some kind of legal status. There are conflicts within the group as well; practicing direct democracy can be very hard. But what proves to be the hardest, is the inner conflicts each individual has to face. These people in their fifties are forced to develop a new identity, one that will allow them to survive in dignity and withstand the sufferings of an ‘outrageous fortune’” 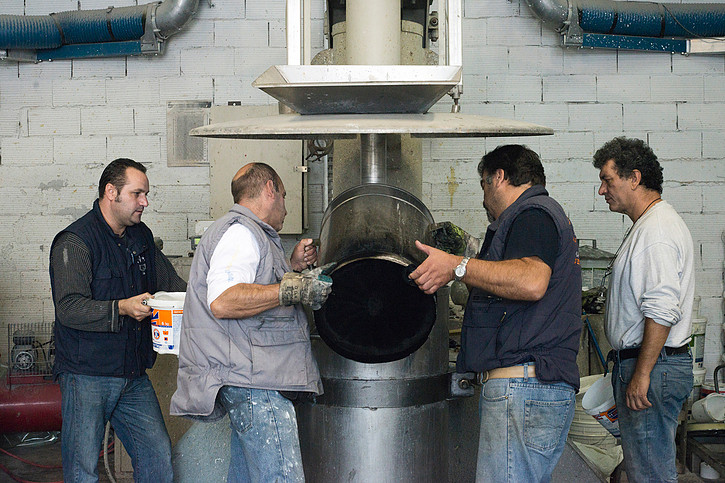 The ecological cleaning products and soaps that are produced in the factory are sold via an e-shop, a retail outlet that opened in 2016 in Athens and markets without intermediaries. According site Popaganda, since 2015, the rise in sales is 20-25% per year and sales abroad have risen by 70% in 2016. Spyros Sgouras, who runs the e-shop, told Popaganda that that the Vio.Me. model "shows how the social economy can work. People do not buy our products just because they are organic or vegan. They contain another message, the message of solidarity, self-organization, labor and social control of production. And there is great potential in that in Greece and Europe”. 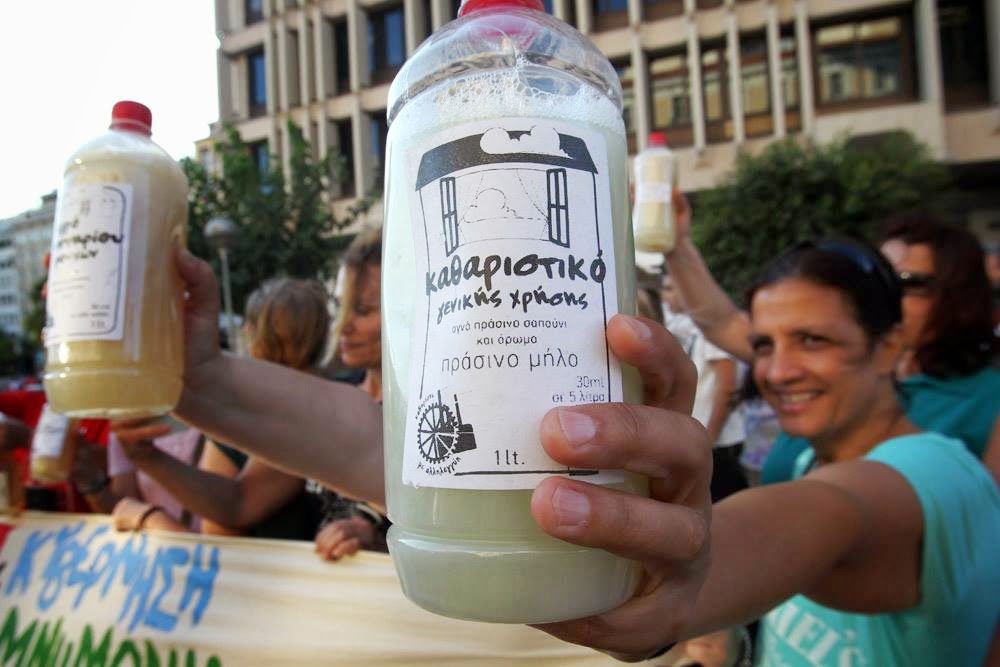 Twenty-eight year old chemical engineer and the younger member of the coop Vangelis Bragoteris also speaking to Popaganda: "In any other business there is a boss and you do two things at most. Here you are learning and doing everything. Everyone passes through all the posts. There is no hierarchy "and there is alog the challenge of "making things from scratch, making new recipes". Out of the 23 members of the coop, only six are on payroll. The rest are still on work stoppage. "Those who are paid are getting a very low pay, 360 euros. But that's not the point. The people who started the project managed to escape the misery and depression of unemployment and became creative.”

In October 2016, the Second Euromediterranean "Workers' Economy" Meeting, a forum on the challenges faced by workers in their efforts to defend their means of subsistence through self-management, took place in VIO.ME with more than 200 international participants.

Recently, Vio.Me. has been proclaimed an example of "good practices" for Northern Greece as part of a project for the sustainable and solidarity economy implemented by Fair Trade Hellas with 28 other organizations in Europe. "In the years of the deep crisis, the Vio.Me. workers took production in their hands, assumed their social role and taught us how a business can have a positive impact on the environment and society through self-management in operation and decision-making, Kelly Garyfali, Program Manager of Fair Trade Hellas told newspaper Kathimerini. Fair Trade Hellas has produced a short film on the VioMe story:

Despite being socially consolidated and productively successful, the Vio.Me. coop is threatened by an auction and liquidation process. After 4 years of struggles, what the cooperatives of Vio.Me. want is for government legitimize the use of the space, the equipment and machinery of the old factory by the coop. The proposal of the cooperatives is that, based on the four million euros in outstanding debts of the previous bankrupt business, the state could confiscate the real estate and then to concede its use to the cooperative.

Based on the following sources: