Mapping the Cultural and Creative Industries in Greece

Although the mapping of the Cultural and Creative industry (CCI) in Greece has been a top priority for the Ministry of Culture and Sports since 2006, it was only until recently that the CCI in Greece has been the subject of a comprehensive study. The study titled “Mapping the Cultural and Creative Industries in Greece” was conducted by the Regional Development Institute of Panteion University from September to December 2016 and was published last June. The study provides a clear and complete overview of the Creative and Cultural Industry in Greece, for the period 2008-2014, in order to examine its contribution to the economy, employment, and society as a whole.

What does Cultural and Creative Industries mean?

For those not acquainted with the term Cultural and Creative Industries, it is used to describe any enterprise producing marketable goods of high aesthetic or symbolic nature. The use of these products aims at stimulating consumers’ reactions stemming from this experience. The end product or service comprises an intellectual property and a product subject to the legislation for the protection of intellectual property rights. That is to say, the term covers a wide and diverse range of activities (performing and visual arts, design, architecture, advertising, publicity, audiovisual media, software etc), relevant to the wider field of culture.

Overall outlook of the study

The main conclusion of the study is that the financial crisis had a strong impact on CCI’s key figures, but in 2014 signs of recovery are shown. From 2008 up to 2014, the added value in the CCI decreased by 55.1%, the number of employees was reduced by 29.5% and enterprises decreased by 27.9%. The overall outlook of the cultural and creative industries in Greece shows that despite the enormous downfall they have experienced since 2008, in 2014 they record signs of recovery for the first time after six years and that the cultural and creative sector constitutes a fundamental pillar of the Greek economy.
A stabilizing trend is expected for the sectors of advertising, printing-manufacturing-handcrafts, arts and audiovisual, while it appears that publishing, radio and TV enter another downturn of low intensity. The study also deals with regional disparities in the cultural and creative production. The unbalance in terms of distribution of cultural and creative production is more than obvious. The Region of Attica produces 75.5% of the Gross Value Added of the CCIs in Greece, with 57.3% of creative enterprises, which employ 60.8% of employees as a whole. Another interesting chapter of the study refers to the international trade in cultural goods and cultural participation. According to the survey, although Greece is a net cultural goods-importing country, from 2008 to 2014, imports reduced by 51.2%.

You can read the executive summary in English here. Read the full text [in Greek]: Part 1; Part 2 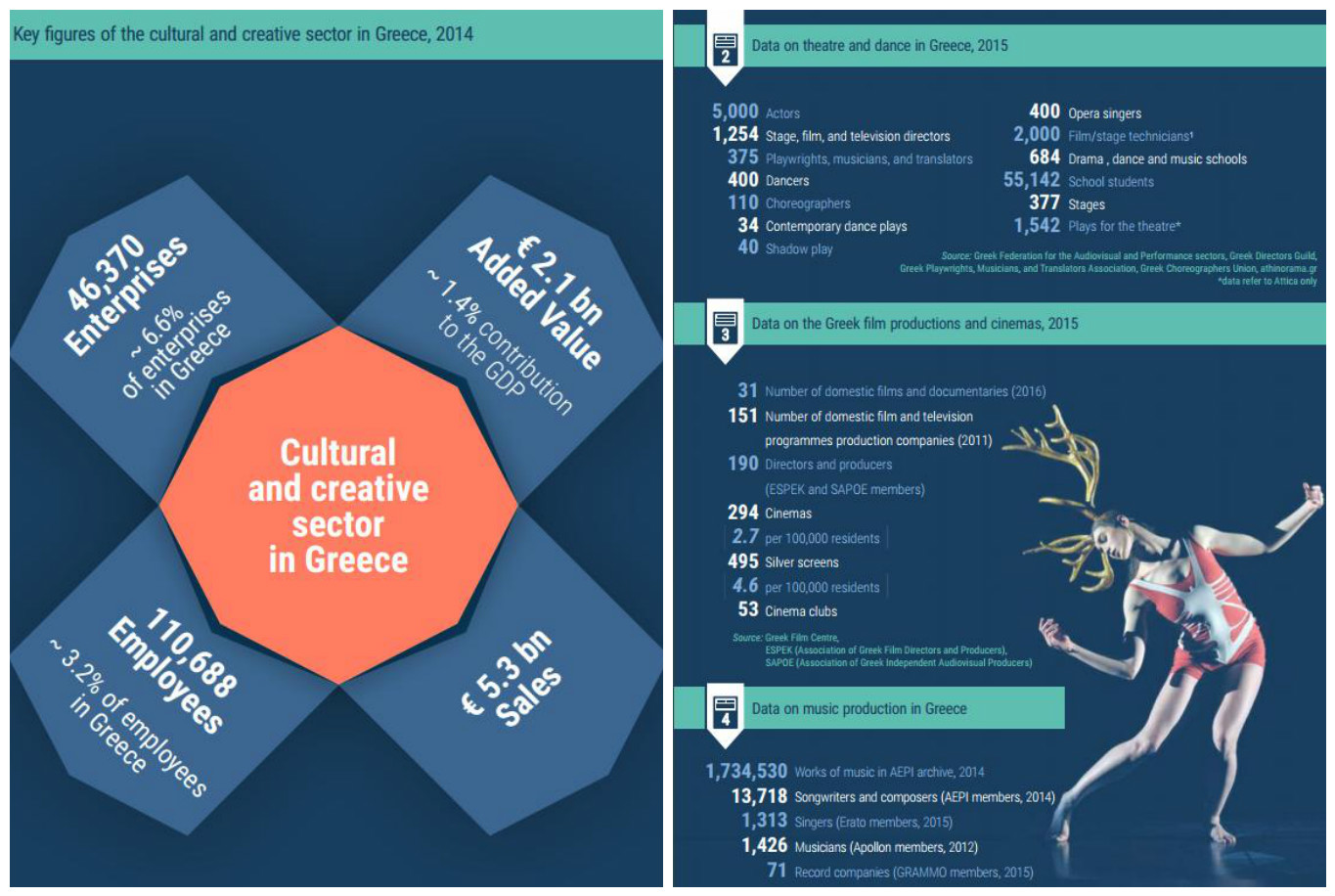