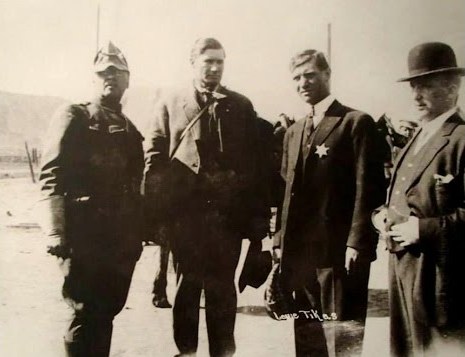 Louis Tikas (born 1886 as Elias Spantidakis in Loutra, Crete) was a Greek-American immigrant, coal miner and unionist who lost his life fighting for labor rights in early 20th century America. He was the main labor union organizer at the Ludlow camp during the 14-month coal strike in southern Colorado, a major labor uprising, also known as the Colorado Coalfield War. He was shot and killed during the Ludlow Massacre, the bloodiest event of the strike, on April 20, 1914.

In 1906, Tikas aged 20, immigrated from Crete to the U.S., like hundreds of thousands of Greeks did in the early 1900s. For many, the only work they could get in the U.S. was in the dangerous coal mines around the West. Most of the Greeks in southern Colorado were working in coal mines owned by the huge Colorado Fuel and Iron company. The mines were notoriously dangerous and the miners lived in extreme poverty. The situation in the mines was medieval; from 1910-1913, 618 miners were killed in accidents. 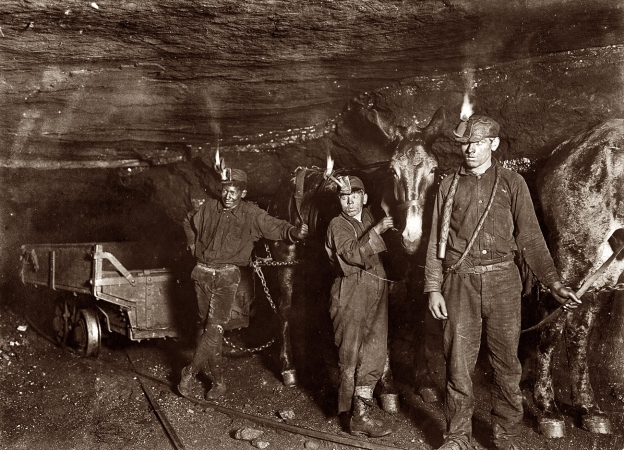 In 1910, the year Louis Tikas filed his citizenship papers, he was part-owner of a Greek coffee house on Market Street in Denver. By the end of 1912 he was an organizer for the ‘United Mine Workers of America’. In between, he had worked as a miner-strikebreaker in Colorado’s Northern Coal Field, but ended up leading a walkout by sixty-three fellow Greeks at the Frederick mine.

It was a short journey in time, but it was then that “Tikas enters his destiny,” as wrote Zissis Papanikolas, Tikas’ biographer. “It is a moment worth considering. In making the turn from scab to striker he was following the path of thousands of immigrants before him. In a profound way, more than at that moment when he set foot on Ellis Island, more than at that other moment when he signed his first papers with a new name, walking out of the Frederick stockade was the most American thing he had done.” 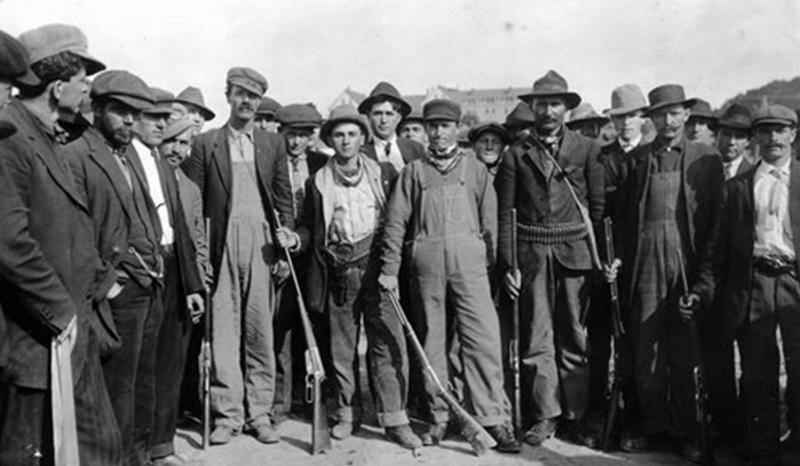 As a unionist, Tikas began touring the coalfields of Denver and Pueblo, gathering statistics on accidents and injuries in the period 1912-1913.  On September 23 1913, the great strike in Ludlow began, with the participation of 13,000 miners. The strikers demanded the following: to shop from any store of their preference; go to any doctor they wish and not exclusively to the doctors of the company; recognition of their union; establishment of an eight-hour work day; law enforcement of the State of Colorado regarding mining safety; to abolish the script and the system of guards of the company that made the workers’ camps like concentration camps. The heads of the strike ware John R. Lawson and Louis Tikas.

Company guards forced strikers families out of their homes. Ten thousand people left the company towns in the canyons and came out in the open planes, where the union, anticipating the strike, had built eight "tent colonies" with thousands of tents. One of them was Ludlow, with 1200 residents, among them many Greeks, mostly Cretans. With them, was Louis Tikas, who during the strike emerged as a capable and popular union representative and soon became the leader of the tent city. Everyone knew him as Louis, the Greek. 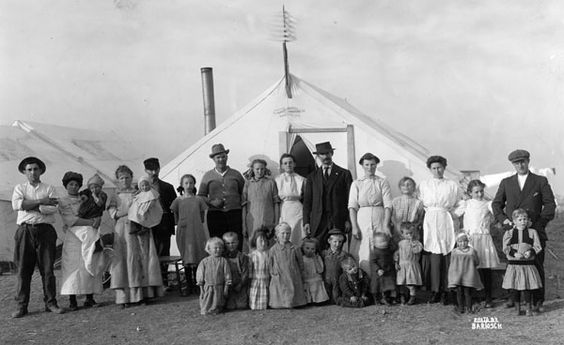 The Ludlow Massacre, the seminal event of the Colorado Coal Wars, began the morning of April 20, the day after the people at the Ludlow tent colony had celebrated their Greek Easter. Described by historian Howard Zinnas as "the culminating act of perhaps the most violent struggle between corporate power and laboring men in American history", the Ludlow Massacre was an attack by the Colorado National Guard and Colorado Fuel and Iron Company guards on a tent colony of 1,200 coal miners and their families. More than 30 people, including miners' wives and children, were killed, and 100 were wounded in the course of the attack. The chief owner of the mine, John D. Rockefeller, Jr., was widely criticized for having orchestrated the massacre.

On the day of the massacre, troops surrounding the colony began firing into it. All day long, machine gun bullets ripped through the tents. As Joanna Sampson has described the scene: “The tent colony exploded in terror. People dodged bullets. Frantic parents searched for their children while screaming ‘run for the hills!’” (Sampson, ‘Remember Ludlow!’). Toward evening, the soldiers advanced, soaked the tents and set them afire. 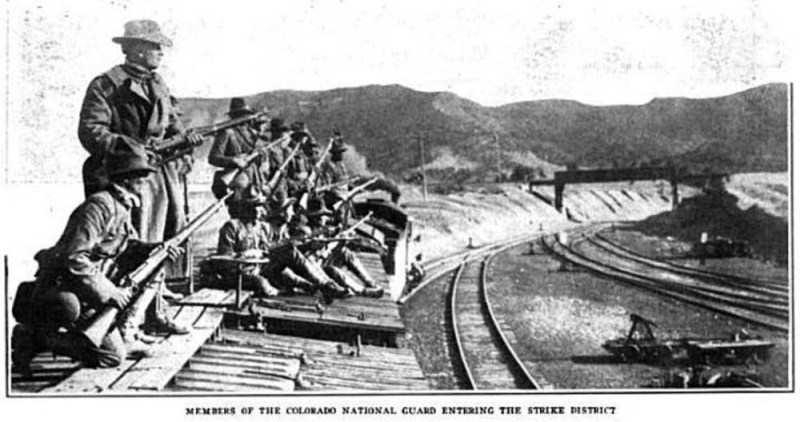 Soon after, Louis Tikas, who during the long day had heroically helped women, children and the wounded escape the carnage, was captured by the militia and taken before Lieutenant Karl Linderfelt, who grabbed a rifle and broke it over Tikas’ head. Though the exact details following that incident are not known, Tikas soon was dead, shot three times in the back. Thus the circumstances of Tikas’ death–even though it is well known he was murdered by coal company managers and the state of Colorado–are similar to what is left us about his life: a “shadow caught against the flow of history.” 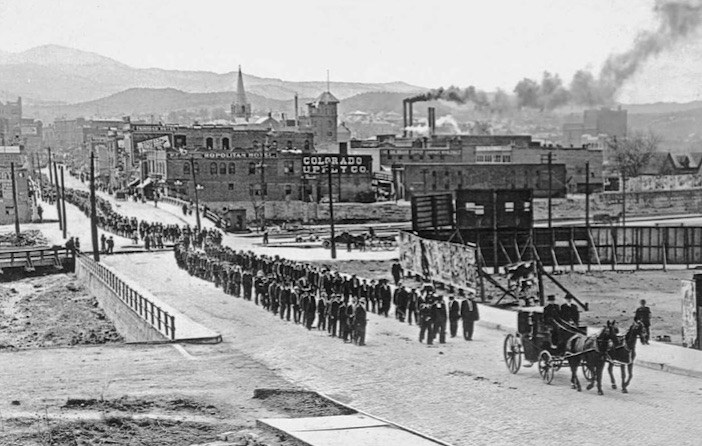 This 1914 photo provided by the Denver Public Library, Western History Collection, shows the funeral of Louis Tikas with thousands of fellow miners accompanying his body Newspaper accounts of the time said the funeral procession was “several miles long".
The Ludlow site, 18 miles northwest of Trinidad, Colorado, is now a ghost town, owned by the United Mine Workers of America, which erected a granite monument in memory of the miners and their families who died that day. Several popular songs have been written and recorded about the events at Ludlow, among them "Ludlow Massacre" by legendary American folk singer Woody Guthrie. Poet Tomas Mason wrote the verse novel Ludlow (2007), named best book of poetry in 2007 by the Contemporary Poetry Review and the National Cowboy and Western Heritage Museum.

However, Tikas’ own story had been largely forgotten, to come to the public forefront once again in 1991, when Greek-American writer Zissis Papanikolas wrote his biography, Buried Unsung: Louis Tikas and the Ladlow Massacre.

In 2013, director Nickos Ventouras and producer Lamprini Thoma made the "Palikari - Louis Tikas and the Ludlow massacre" documentary,charting the story of the great coalminers’ strike and Louis Tikas’s murder, as it survives in oral and family traditions, as well as in official history, interviewing historians and artists, some of them direct descendants of those striking miners. Labor movement emblem Mother Jones and industrialist John D. Rockefeller, Jr. also make cameo appearances in this palimpsest of memory, struggle and deliverance.

In 2016, The “Apostolis Berdebes” nonprofit company produced  “Ludlow, Greek Americans in the Colorado Coal War” a documentary narrating the story of Greek immigrants at the beginning of the last century, who ended up in distant Colorado working under inhuman conditions in the coal mines of Rockefeller and his fellow mine owners, and who together with immigrants from 22 other countries revolted and wrote a proud page of American labor history, known as the Colorado Coal War of 1913-14. The documentary was selected as “best film in the Recordings of Memory section” of the 18th Thessaloniki Documentary Festival and awarded the “Human Values Award” of the Hellenic Parliament.

Kostis Karpozilos on the international history of the Greek Left, Greek-American Radicalism, and the need for progressive reforms