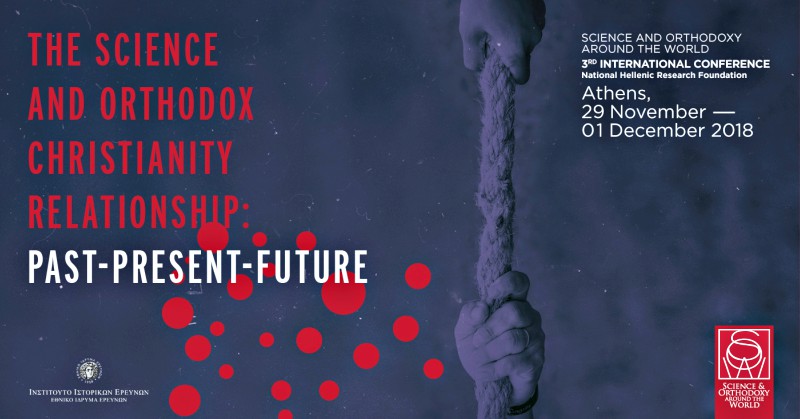 The 3rd International Conference “The Science and Orthodox Christianity relationship: past-present-future" takes place on 29 November – 1 December, 2018 at the premises of the National Hellenic Research Foundation in Athens. The event is organised by the Institute of Historical Research of the National Hellenic Research Foundation, as part of the project "Science & Orthodoxy around the World - SOW”.

The project “Science & Orthodoxy around the World - SOW” focuses on the ongoing dialogue between science and religion in the Orthodox Christian world. More than 50 specialists from 15 countries participate from various academic fields such as Science, Philosophy, History, Theology and Education. The project reaches out to all relevant scholars, researchers specialising in the study of Science & Religion throughout the world, as well as a wider audience with an interest in the relation between sciences and faith. International conferences, workshops, public lectures, publications and 45 peer-reviewed articles are oganised as part of the SOW project.

SOW’s aim is to function as an enduring platform for dialogue on an international level between scientists and Orthodox thinkers, sparking a wider discussion, and to promote Orthodox Christianity as a topic of Science & Religion studies. SOW collects, records and presents the views and positions emerging from the ongoing conversation between science and religion in Greece, Russia, Ukraine, Romania, Bulgaria, Serbia and Georgia, as well as the United Kingdom, the United States of America, France and Australia, through a special open-access database and a collection of personal interviews on digital media.

The third international conference concludes a three-year effort by Project SOW to chart and help advance the current discussion regarding the relation between science and Orthodox Christianity. Through research, discussions in conferences and workshops, filmed and recorded interviews, a number of important thematic areas have been revealed and examined, highlighting controversial but interesting aspects of the science-religion relationship. Among these areas are bioethics, ecology and environment, physics and cosmology, psychology- psychoanalysis and philosophy.

Speakers are going to cover a wide area, as evidenced by the abstracts of the papers to be presented; some of the topics are “Our minds move our bodies. The implausibility of the causal closure of the physical”, “Medicine, suffering and death: palliation and the ethics of caring for those we cannot cure”, “Orthodox Christianity and the Archaic Experience of Nature”, “Dialogue between the technologist and the theologian on electronic personality”, “The Enduring Temptation of Scientistic Reductionism as the Secular equivalent to Religious Literalism”, and “Orthodox Perspectives on Gene Editing: Ramifications of CRISPR Technology”.

Day 3 of the Conference will feature a workshop dedicated to the Psychology/Psychoanalysis relationship with Orthodox Theology. Taking into account the increasing interest shown by contemporary Orthodox Christian thinkers towards psychoanalytic theory, as well as the relational spirituality put forward by contemporary Orthodox theology, the workshop aims at answering questions, such as: What can religion offer to psychoanalysis – and vice versa? Issues of theological anthropology are to be explored, in order for areas of convergence and cooperation to be traced. The workshop will be conducted in English with Greek interpretation.

See here for the complete programme

The Institute of Historical Research is one of the three institutes that constitute the National Hellenic Research Foundation in Athens. It evolved from the merging of three humanities institutes in 2012. It focuses its activities on the creation and dissemination of new knowledge, as well as the training of younger researchers, thus contributing decisively to national self-awareness and international scientific cooperation in its scientific fields. It is divided into three sections: Greek & Roman Antiquity, Byzantine Research and Neohellenic (Modern Greek) research.

Read also via GNA: Modern Science and the Orthodox Tradition. An uneasy relationship?; Shedding “light” on the Relationship between Science and Religion; Study in Greece: Master´s in Orthodox Ecumenical Theology; Modern Greece Between East and West: Hysteria and Otherness; The man who teaches Koreans Byzantine art