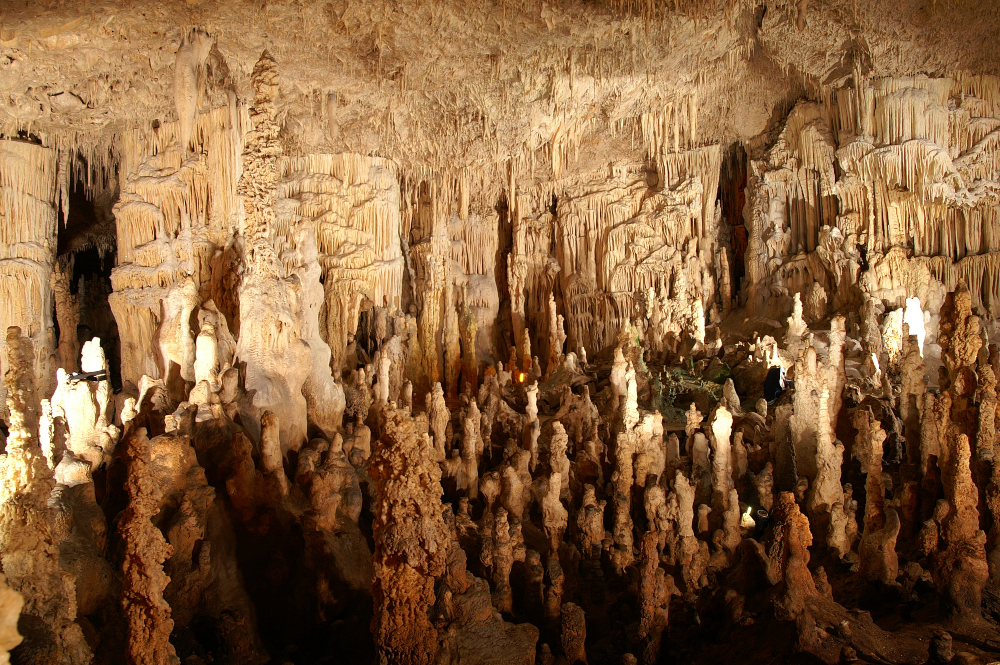 Greece is well known for being the birthplace of democracy, the country where the Olympic Games took place for the first time and for its unique archaeological sites. Greece also features countless sandy beaches, beautiful islands and picturesque villages. What many people do not know is that Greece is also home to over 6000 known caves of spectacular beauty. Stalactites and stalagmites, halls similar to those of royal palaces and crystal-clear waters create unique underground landscapes. Almost every cave in Greece is linked to a different legend, either from mythology, ancient history, or the era of the Ottoman rule. Some caves have been linked to religious traditions, as is the case of the famous Cave of the Apocalypse on the island of Patmos.

The Hellenic Ministry of Culture and Sports includes an Ephorate of Palaeoanthropology and Speleology, which is in charge of the “the protection, promotion and management of the Greek caves and the paleontological remains related to human existence”. The Ephorate conducts expeditions, and is supervising excavations and all other scientific researches, promoting paleontological research, as well as preparing and conducting studies, for the preservation and tourist management of the caves and all kinds of archeological and paleontological remains found in them.

History of Speleology in Greece

Cave researches began when the country was still under Ottoman rule. Foreign travelers visited Greek caves, especially on the islands, for archeological purposes. From 1700 to 1702, French botanist and physician Joseph Pitton de Tournefort, traveled around 38 islands in the Aegean Sea. The aim of his expedition was to collect plant species, but he also visited some of the known caves in these areas, of which he kept records.

According to Thomas Theodosiadis “The boom of speleology in Greece is almost simultaneous with the boom of mountaineering, and a major part in this is played by the Hellenic Alpine Club (H.A.C.) of Athens. A Speleology Team (S.T.) was officially founded as part of H.A.C. in 1936, to include members of H.A.C. interested in caves, who had already been part of cave explorations. I. Sarris was the founder of the team, and its members included Erato Angelopoulou, I. Nikolopoulos, G. Soutsos, A. Xanthopoulos, A. Kanellis and others. H.A.C. founded annexes in almost every prefecture of Greece. In November 1950 the Hellenic Speleological Society was founded by John and Anna Petrochilos, Eleftherios Platakis, John Kapsambelis and others. The Society undertakes the official organisation of scientific expeditions and touristic visits to the caves of Greece.”

As Greece is a country with rich geological structure, thousands of subterranean and underwater caves have been formed both in the mainland and on the islands:

The spectacular cave complex of Diros in the Peloponnese offers the visitors the opportunity to travel back to the Neolithic Era. 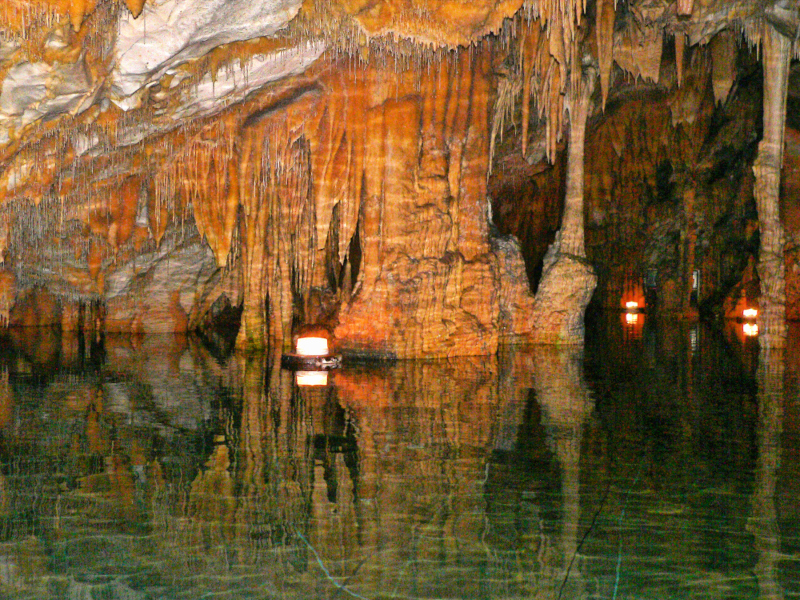 The complex consists of the famous Alepotripa and Vlichada caves, located in the region of Mani. They were first explored by the speleologists Ioannis and Anna Petrochilos in 1949.

According to researchers Alepotripa had housed hundreds of people -potentially making it one of the oldest and most important prehistoric villages in Europe- before it collapsed, killing everyone inside. The main chamber of the cave is about 60 meters tall and up to about 100 meters wide. It is large enough to have its own lake, in which famous explorer Jacques Cousteau had scuba-dived.

The cave of Vlichada covers an area of 16,700 m2 and, since 1949, about 2,800 water passages have been explored. During a 40-min boat trip, the visitor can admire the breathtaking formations of stalactites and stalagmites, reflecting in the water. The guided tour takes place both by boat and on foot.

The legendary Cave of the Lakes is located near the village Kastria in Achaia, 60 km from the city of Tripoli. The waters derive mostly from an intense flow of drops in periods of great rainfalls, but also partly from a swallow-hole, and stagnate in the 13 terraced lakes creating unforgettable scenery. The first archaeological autopsies inside the cave were carried out in 1967 by the archeologist Efthymios Mastrokostas. In 1992-1994, the excavation by the Ephorate of Palaeoanthropology - Speleology, headed by Adamantios Sampson, brought to light anthropological and archaeological finds, which provide evidence that this cave was known to man since the sixth millennium B.C

Another very impressive cave is Kastania cave on the southern tip of the Peloponnese, just a few minutes away from Neapoli. The cave was discovered at the beginning of the previous century by a shepherd named Kostas Stivaktas. It is a unique and rare cave, full of stalactites and stalagmites in unbelievable combinations of colors and shapes.

The most famous cave in Attiki region is the cave “Koutouki” in Paiania, on the eastern side of Hymettos Mountain. It was discovered by residents of the area in 1928. The first person to publishe a description of the cave in the magazine “Ellinikos Tahydromos” (10/02/1928) was the journaist D. Chatzopoulos.

The rich decoration of stalactites and stalagmites and their unusual coloring, owed to the presence of certain oxides, creates a magical scenery and has inspired the romantic naming of some of the rock formations: Olympic Torch, Altars, Corals, Harmonium, Red Waterfall, etc.

Nympholeptos Cave in Vari is a stalactite cave, with two chambers, one above the other. In antiquity it was a sanctuary of Pan the god of shepherds and of the Nymphs. Richard Chandler was the first scientist to give a description of the Nympholeptos cave and also described the cave of Pan in Keratea. In January 1810 Lord Byron also visited the two caves. 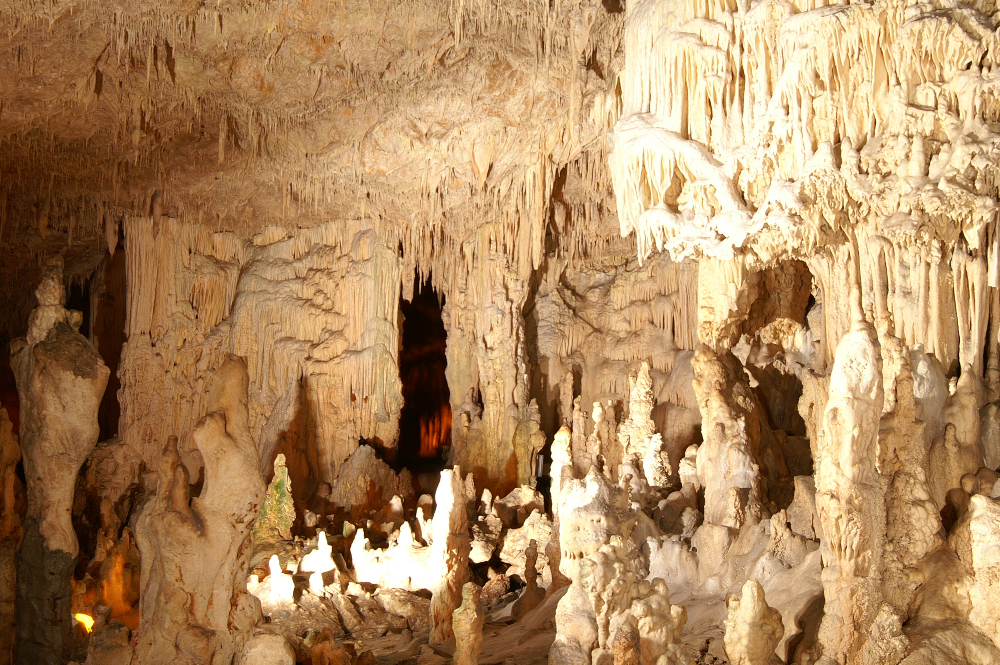 Perama cave is located in the small eponymous village, four kilometers from the city of Ioannina. The cave is part of the bed of an underground river and was formed in the pre-Quaternary period, about 1.5 Million years ago. In 1956 the tooth of a cave bear, the first ever discovered in Greece, was found in this cave by the speleologist Anna Petrocheilou. It looks like a three-storey palace in the heart of the Goritsa Hill.

The beauty of the chambers defies description. It seems impossible that the hall of the Cross was formed without human intervention, as well as the Hall of Legendary Palaces, which looks like a fairy house. It has 19 different types of stalactites and it is considered as the cave with the most types of stalactites in the world. 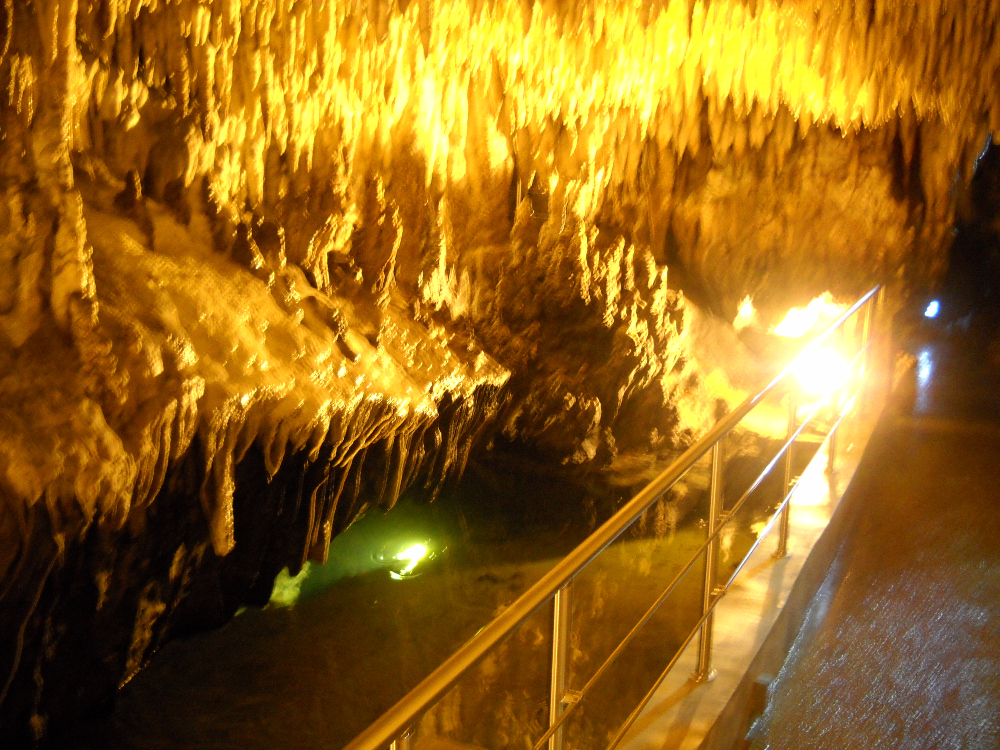 Dragon Cave is located on the second kilometer of the lakeside road of the city of Kastoria. After technical and conservation works under an EU-funded project, the Dragon's Cave opened to the public in December 2009. It features seven underground lakes, ten chambers and five tunnels. The stalagmites & stalactites and the crystal clear water at the bottom of the cave offer an unforgettable experience to the visitors.

The Cave of Aggitis River is believed to be the largest river cave of the world.  It is unique because it is crossed by Aggitis River and for this reason there are not stalagmites in its interior.Its roof is full of stalactites, some of which have a diameter of 2m. and touch the surface of the water. Their colors are amazing, due to the existence of minerals such as manganese, iron, copper etc. At the entrance of the cave there is a waterwheel that was used, during the Turkish occupation, for the water supply of the nearby settlements. 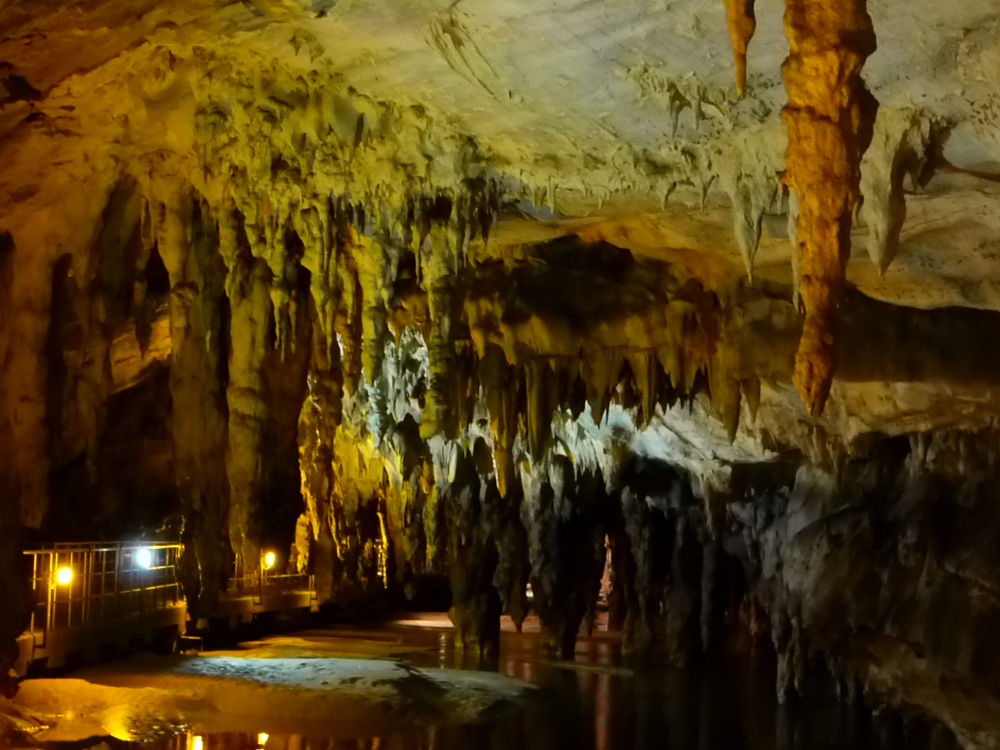 On the island of Cephalonia there are many caves worth visiting, including Melissani and Drogarati.

Three kilometers from Sami the visitors can admire Drogarati Cave, one of the most famous caves on the island, with stalagmites and stalactites that create a very impressive landscape. In the interior of the cave there are two distinctive parts: One long corridor, leading to the platform of stalactites named the Royal Balcony, and the Chamber of Exaltation, a place with very good acoustics that is ideal for events.

The other famous cave of the island is the lacustrine cave of Melissani. It is located 4 kilometers northwest of Sami and constitutes a unique geological phenomenon. The underground Melissani Lake was discovered in 1951 by the speleologist Ioannis Petrochilos. A big part of its roof has fallen down revealing an amazing sight. The lake includes also an islet on which archeologist S. Marinatos discovered Pan's sanctuary. According to Greek Mythology it was the cave of the nymphs, and the place where the nymph Melissanthi committed suicide because Pan rejected her. 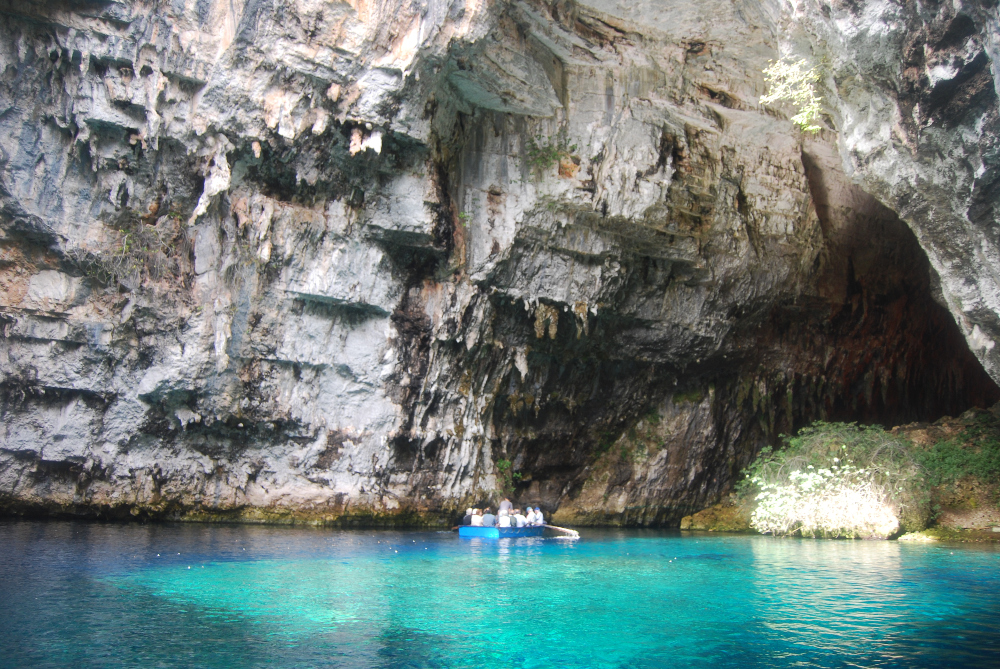 The cave of Nausica is located in the Greek island of Corfu, near the village Palaiokastritsa. There are a lot of sea caves in the beaches of the village, but the most famous is the cave of Nausica. It is considered to be the place where, according to the Book Six of the Odyssey, Odysseus met the princess Nausica, the daughter of thee king Alcinous, after the sea god Poseidon turned his ship to stone.

The Cave of Antiparos is situated 8 km from the town of Antiparos, on the hill of Agios loannis. The entrance to the cave is guarded by a small 18th century church called Agios loannis Spiliotis (Saint John of the Cave). It is large and has several levels. The Cave is divided into the ‘Antechamber’ and three additional halls: The Chamber of the Stone Waterfalls, The Chamber of the Cathedral, and The Royal Chamber.

Archaeological researches inside the cave have brought to light shells and human bones, which are today demonstrated in the Archaeological Museum of Paros. There is also an inscription which reports that in the archaic years Archilochus, the great lyric poet of the 7th century, had visited the cave.

The Holy Cave of the Apocalypse is a point of reference not only for the island of Patmos, but for Christianity worldwide. It is believed that it marks the spot where John of Patmos received his visions that he recorded in the Book of Revelation.

As the Evangelist himself testifies at the beginning of his book, “I John, who also am your brother, and companion in tribulation, and in the kingdom and patience of Jesus Christ, was in the isle that is called Patmos, for the word of God, and for the testimony of Jesus Christ. I was in the Spirit on the Lord’s day, and heard behind me a great voice, as of a trumpet, saying[…]”

In 1999, UNESCO declared the cave a joint World Heritage Site together with the Monastery of Saint John the Theologian. 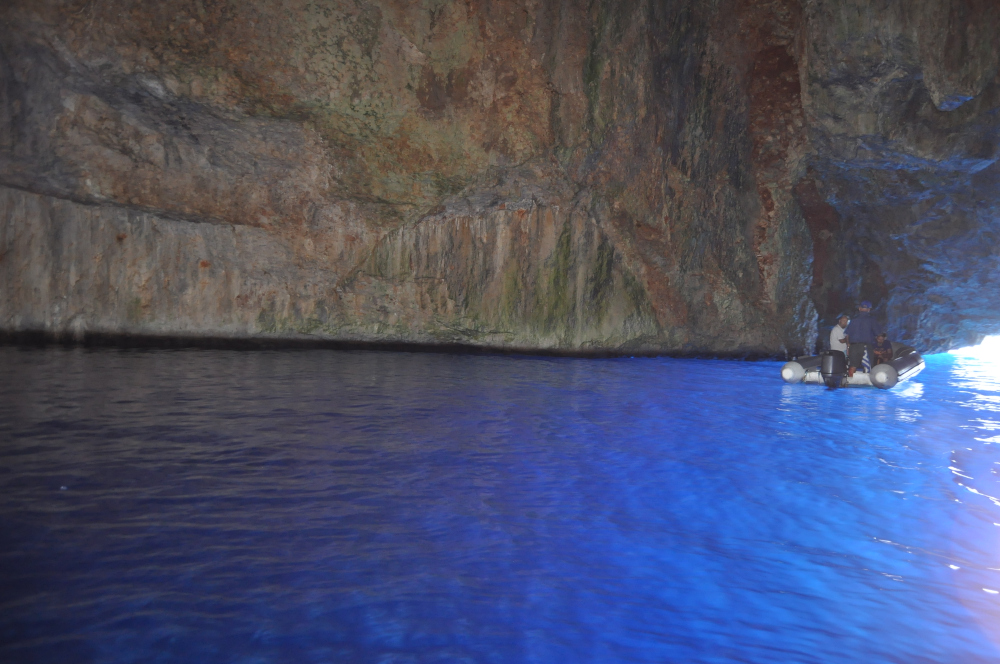 On the small island of Kastelorizo, we find the Blue Cave, a true miracle of nature, and the most important attraction on the island. The whole scenery is mesmerizing. Upon entering the cave, a new magic world is opening in front of the visitors’ eyes. When the morning light comes into the cave, it reflects from the bottom giving a deep blue color to the surrounding rocks. The cave is allegedly inhabited by monachus - monachus seals.

Read also via Greek News Agenda: “Fiscardo wreck” in Kefalonia: The largest Roman shipwreck in the eastern Mediterranean; Pavlopetri: The Oldest Submerged City in the World; Photography: W. Mark Wilman on "Discovering the Beauty of the Cyclades"; National Marine Park of Alonissos, a gem of biodiversity