The ancient city Vravron (also known as Brauron) was one of the twelve cities of ancient Attica near the river Erasinos, situtated on the eastern side of Attica, about 20 km from Athens. It was especially celebrated as the site of the Sanctuary of Artemis known as Artemis Brauronia one of the most important sacred locations in the ancient times.

During the Neolithic period, an important settlement was established at the inner end of the bay of Vravron and it is believed that the first inhabitants were from the tribe of Pelasgians. Gradually the town developed around an acropolis; many important politicians of Athens in fact originated from Vravron, including Miltiades, Cimon and the tyrant Pisistratus.

At the end of the Mycenaean era the settlement was abandoned, apparently after the attack of enemies. Upon their return, the inhabitants did not settle on the hill of Vravron, but about 3 km further from it, in the area "Kipoi", as the vivid memory of the attacks prevented them from settling on the same hill. The new settlement of Vravron was located far from the sea and was protected by low hills. It extended to the estuary of the river Erasinos (modern-day Vouraikos), about 10 m away from its riverbed and at a distance of 700 meters from the sea. Remains of tombs of the Geometric period were discovered in the hills around the sanctuary. 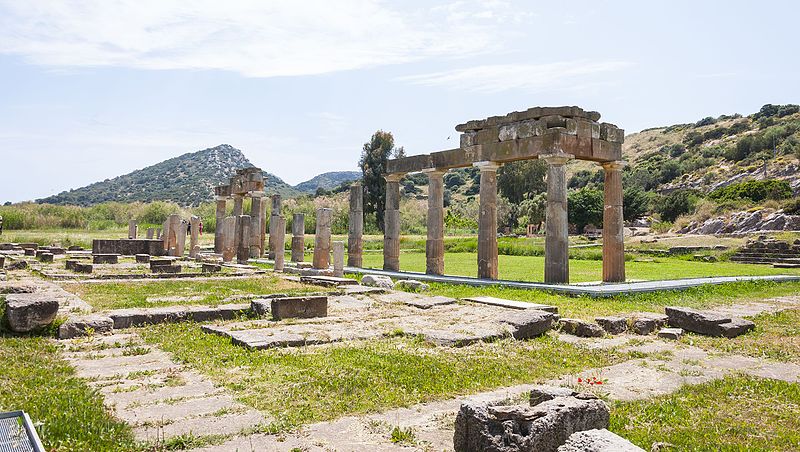 View of the Doric Stoa (by Ava Babili via Wikimedia Commons)

The cult of Artemis in Vravron

Artemis was thegoddess of hunting, agriculture, wild nature, and chastity. She was also the protector of women in child-birth and of the infants. According to the legend, the mythical Iphigeneia, priestess of Artemis, was buried in Vravron where she was also honored as a goddess of child-birth. According to the tradition, at the sanctuary there was a statue of the goddess that Orestes and Iphigenia had brought from Taurus on Artemis' command, which was never discovered. Some archeologists believe it was the "orthon statue" of the inscriptions of the Athenian Acropolis and was attributed to Praxiteles.

The sanctuary of Artemis gained great importance from the 6th century BC, and knew its heyday from the last half of the 5th c. until the end of 4th c. BC. According to the Greek Ministry of Culture the first known temple at the sanctuary of Vravron was built in the archaic period (700 - 508 BC). Little is preserved from the original temple, which was destroyed in 480 BC by the invading Persians.

The temple was reconstructed in the 420s BC; several other buildings were also constructed near the temple. Some of them were brought to light during excavations, while others have not yet been found, but are mentioned in ancient scriptures. The temple (not to be confused with the Brauronion, the Temple to Artemis Brauronia on the Acropolis of Athens) was built of local sandstone in the Doric style and held a key position, dominating above all the other buildings of the holy site. In this place today stands the church of Saint George. 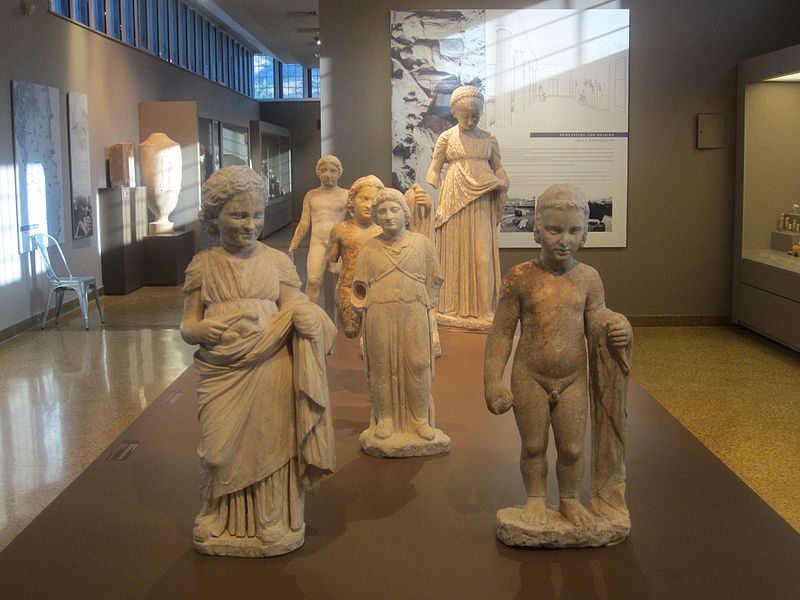 Systematic excavation on the site started in 1948 by Ioannis Papadimitriou. In the 1950s, the Π-shaped Doric stoa surrounding the courtyard of the Temple of Artemis was restored under the supervision of Professor Ch. Bouras.

The cella of the temple was divided by a colonnade into 3 parts. At the end of the 5th c. a terrace for the worshipers was constructed. The position of the altar is disputed. Immediately to the NW of the temple’s terrace there was a spring where the worshipers would throw their offerings. In the partly artificial basin of the spring, near the bed of the stream flowing north from it, many dedications were recovered, mostly mirrors rings, gems, etc. Particularly valuable are many objects of bone and wood which have been preserved in the mud.

An Attic festival was held every five years in Vravron, in honor of Artemis Brauronia. The festival was supervised by ten hieropoioi (religious officials); Attic girls between the ages of five and ten, dressed in crocus-colored garments, went in solemn procession to the sanctuary, where they were consecrated to the goddess. During this act, the hieropoioi would sacrifice a goat, and the girls performed an initiation rite called arkteia in which they imitated she-bears. This rite may originate from the fact that the bear was sacred to Artemis, especially in Arcadia.

Today, in the archeological site of Vravron, visitors can see the remains of the temple, the sanctuary of Iphigeneia, the gymnasium and other buildings. Many of findings have been transferred to the Archaeological Museum of Vravron and other in the Acropolis Museum. 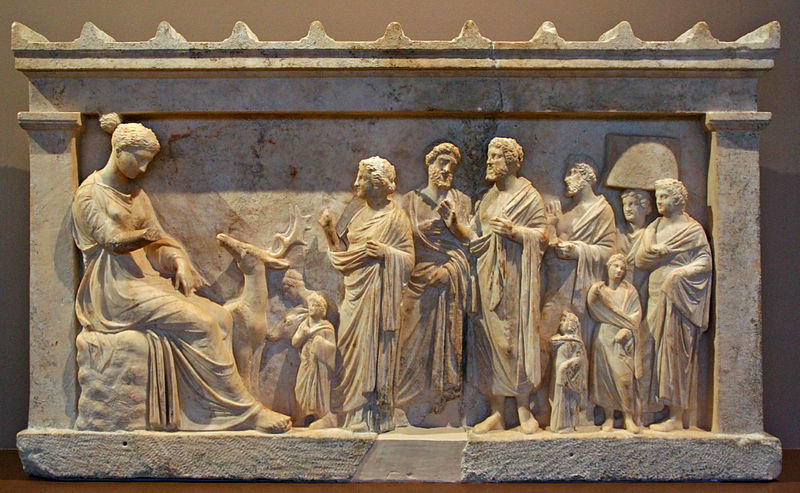 Marble Votive Relief from the site of Vravron, 350 BC (by Ophelia2, via Wikimedia Commons)

The Archaeological Museum of Vravron stands at a distance of 200 meters from the archeological site of the sanctuary. It was in 1969. It is considered as one of the most important museums in Attica, housing the impressive findings not only from the systematic excavations of the sanctuary in Vravrona, but also from the wider region of the “Mesogeia”. The exhibits cover a large period of time, from the early Bronze Age to the Roman Age. The main collection consists of exhibits that were discovered in the temple of Artemis, statues of the goddess, coins and jewelries, as well as small statues of girls from 4th century BC.