Τhe Hellenic Foundation for European and Foreign Policy's (ELIAMEP) 2015 Annual Lecture took place Wednesday, 16 December 2015, at the French Institute in Greece, with Financial Times chief economics commentator and distinguished author, Martin Wolf, as Keynote speaker.  Considered one of the world’s most influential writers on economics, and a connoisseur of the Classics, he delivered a thoroughly documented overview of the situation in the crisis-hit countries of the Eurozone, with a separate reference to the Greek case. 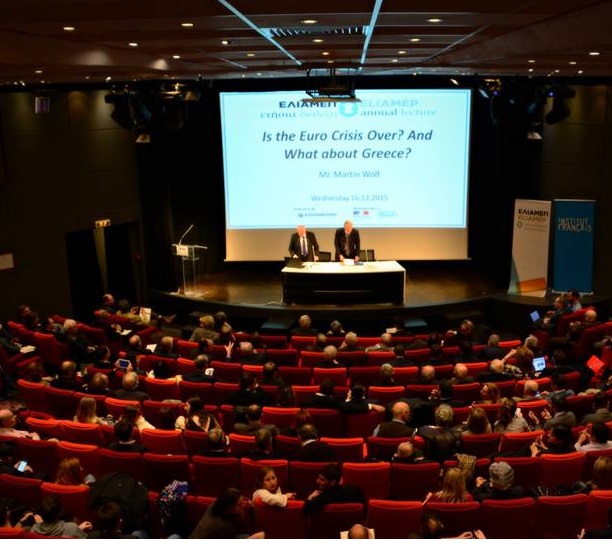 Referring to the signs of “recovery” that most countries except Greece are showing, Wolf noted that it is in reality an “illusory recovery”, as one could easily observe how output and employment are still very weak, with huge divergences existing in the living standards of different countries in the Eurozone (notably the case of Germany and Spain). The fact is that the Eurozone is faced with a very slow turnaround in unemployment and a considerable weakness in demand, but at the same time, the successive consensus forecasts for 2015 are remarkably positive. As far as the crisis-hit countries are concerned, their state was clearly defined as in deep recession, but most of them at least showed growth seemingly able to deal with the crisis - with the exception of Greece.

On the other hand, and despite the grim picture indicated by data, Wolf noted that the Greek economy could present its first signs of recovery in 2016. Underlying the inevitable need for Greece to permanently write down the present value of its debt, he pointed to an exciting factor in the Greek case - that the Greek economy is now open to investment and equity funding. However “Greece has to become a normal European country in terms of policies and institutions” if it wishes to remain inside the Eurozone, as the overwhelming majority of the political consensus in the country agrees, he noted.

Talking about a “lost decade” in Eurozone’s sluggish reaction to its crisis, he recognized some progress lately, estimating however that the Eurozone will not become a true federal Union, because solidarity in political terms has been substantially weakened by the crisis. The real issue for the Eurozone is to find its way into a “better marriage” of the different EU-member countries/economies and implement a minimum fiscal union that will back the banking union, make greater use of the fiscal policy at the Eurozone and national levels and show greater resilience on risk-sharing finance with a faster and deeper resolution of bad debt.