A discussion on the future of the Eurozone was held recently (Oct 26) in Cologne, Germany, between Professor Loukas Tsoukalis, President of the Hellenic Foundation for European & Foreign Policy (ELIAMEP) and THESEUSOutstanding Award Winner, with Professor Wolfgang Streeck, a leading German political Economy scientist and Emeritus Director of the Max Planck Institute.

The two scholars agreed the situation is severe, and that a serious reflection on the weaknesses of the EUs Monetary Union is urgently needed.
In his book “Buying Time: The Delayed Crisis of Democratic Capitalism” (2014), Wolfgang Streeck analyzed the Greek crisis as the result of a state that is forced to turn to sovereign indebtedness as a mechanism to replace taxes which authorities fail to collect from better off citizens. He believes that more countries are about to face severe economic and financial crisis, with Italy next in line "to blow up", and that the “the Eurozone will not survive the next five years".
Tsoukalis, on the other hand, compared the situation of the Eurozone with an unhappy marriage: "We are unhappy with the status quo, but terrified of a divorce, which might have even higher costs than those of staying together." Austerity for everybody was not the answer. "How can Greece recover in conditions of financial strangulation and with the rest of Europe stagnating for years?", he asks. "The result has been eight wasted years for the Eurozone as a whole: GDP in 2014 was still lower than it was back in 2007", Tsoukalis noted. "I would even speak of the prospect of a lost generation looking at the very high unemployment rates in the Southern EU member states," he added.
Tsoukalis spoke of a possible grand bargain to sustain the euro and European integration, while Streeck concluded that there is a need to “start understanding other countries' way of thinking".
THESEUS - establishing a European society is a joint activity of Sciences Po Paris, the Jean Monnet Chair of the University of Cologne, Fritz Thyssen Foundation (Cologne), and the Trans European Policy Studies Association(Brussels). 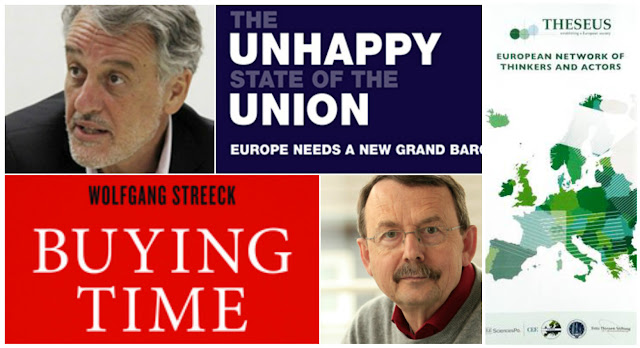