Amid ongoing debate about the intentions of both the Greek government and its European partners to finalise the second evaluation under the Financial Assistance Facility Agreement, Athens based Centre of Planning and Economic Research (KEPE)* launches «Greek Economic Outlook», its quarterly report on the Greek economy (issue no 32nd /February 2017).

This quarter's report features a diverse range of articles that offer an overview of current issues relating to the Greek economy and more specialised analysis of important current topics such as the recent developments in the competitiveness of the Greek economy. Public finances are examined through an analysis of the State Budget and its evolution during the economic crisis as well as the evolution and structure of public debt. Recent developments in key variables of the Greek labour market are also discussed, and an overview of recent trends in the Greek health system and a comparative analysis with the other European countries is also presented.

Table 4.1.2 clearly shows that Greece was performing poorly in the pre-crisis period, which reflects the Greek economy’s chronic problem of very low levels of foreign investment.

The author stresses that the Greek economy’s competitiveness was not in good shape even in the years before the crisis, compared to its counterparts in the OECD high-income countries group. The level of wealth in the pre-crisis era did not correspond to the level of the economy’s competitiveness of the time and it was not backed by the economy’s (low) productivity. Rather, it was an economic development (bubble) based on debt and continuous injections of European Union funds that were not channeled to long-term productive investments but to short-term consumption.  During the crisis years the disequilibrium between low levels of competitiveness and high levels of wealth came to balance. Indeed, as a recent OECD (2016) report shows, Greece significantly increased its R&D spending from 0.67% of GDP in 2007, to 0.96% in 2015. In addition, according to Global Competitiveness Index (WEF, 2007-2015 reports) the only indices that improved in 2015 were those of Innovation and Business sophistication.

Greece's path to sustainable growth
Athanasios Chymis also focuses on the widely used index of Ease of Doing Business (in short, Doing Business) constructed by the World Bank and published every end of October. The index mostly focuses on the business environment and, consequently, it measures the country’s attractiveness to investors (both domestic and foreign), using data that correspond to the previous of the publication year. According to the index, Greece fell by one position in 2015 and now ranks 61st among 190 countries from 60th among 189 countries in 2014. There was significant improvement in the period 2009-2014 when Greece moved up to the 60th ranking from the 109th (among 183 countries) in 2009.

Table 4.1.2 (see above) clearly shows that Greece was performing poorly in the pre-crisis period, which reflects the Greek economy’s chronic problem of very low levels of foreign investment. Despite the considerable improvement of the last years, Greece still lags behind all countries with similar economic crises (such as Ireland, Cyprus, Portugal and Spain) and needs to further and more quickly improve its investment climate in order to become attractive to domestic and foreign investors. This is the only way out of the economic crisis. Investments will create jobs and economic production will boost exports and economic growth.

The author concludes that if Greece is to enter a path of sustainable growth and not, like in the past, a path of unsustainable bubble growth, it has to improve a series of parameters such as: a) quality of institutions, b) trust between the state and its citizens/constituents, c) simplification of the tax law, d) stabilization and consistency of public policies, e) infrastructure improvement, f) access to finance for businesses, g) quality of public services, such as the education system, as well as connection and collaboration between universities and industry, and h) decrease the red tape in order for the public administration to become more effective and efficient. 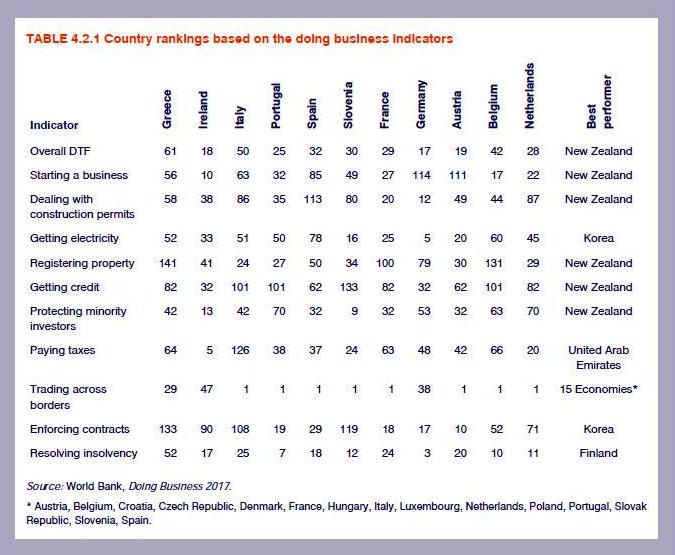 *KEPE is the largest economics research institute in Greece. It focuses on applied research projects in regard to the Greek economy, and provides technical advice to the government and the country's regional authorities on economic and social policy issues. KEPE’s publications include Studies, Reports, Discussion Papers, Research collaborations, the Greek Economy monthly report and the four-monthly Greek Economic Outlook.