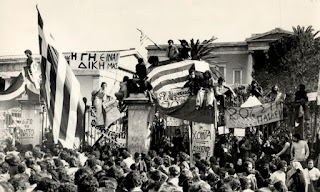 Today, Greece is commemorating the 42nd anniversary since theNovember 17 student uprising at the Polytechnic School of Athens against the military junta that ruled the country from 1967 to 1974. Starting November 15, 1973 thousands of students occupied the Polytechnic School and transmitted a message of resistance against the military junta, through the legendary radio station they set up.
In the early hours of November 17, the regime tanks entered the courtyard of the Polytechnic School, killing dozens of resisting students. But the revolt and its tragic epilogue untangled the events that finally led to the fall of the colonels’ regime, and became a point of reference for Modern Greek history.
Renowned Greek poet, left-wing activist and active member of the Greek Resistance during WWII, Yannis Ritsos, wrote the poem “The boy and the door” ("Το αγόρι και η πόρτα"), in honor of the Polytechnic School uprising and the young people who died there, defending justice and democracy.

The boy and the door

There is a red lake

He turned back and looked at us.

He was wearing neither a bandage

To be on time.

See more: Foundation of the Hellenic World: The Fall of Dictatorship, 1970-1974; Secretariat- General of Information: About Greece - History of Modern Greece