PM Tsipras at Davos Talks on Europe’s Future, Warns Against Austerity in Greece

Greek Prime Minister Alexis Tsipras joined business leaders and politicians yesterday at the World Economic Forum Annual Meeting 2016 in Davos, where he had separate meetings with the head of the International Monetary Fund, as well as with European and US high ranking officials.

Addressing the Forum on Thursday (21.1), at a panel that also included German Finance Minister Wolfgang Schaeuble and French PM Manuel Vals, PM Alexis Tsipras said that Athens would accept the request by its European partners for the IMF’s role in supervising the country’s international bailout, stressing that Greece is doing its best to reach a deal. Tsipras underlined the issues of inequality that the prolonged economic crisis had created and the need for Greece to pursue important structural reforms and attract European private investments. The Greek PM referred to the country’s serious progress in the area of fiscal stabilization and made clear that Greece needs stability and a solution for the issue of high unemployment. He called for greater solidarity and for Europe’s help with the elimination of inequalities.  «Now is not the time to talk about exits”, argued Tsipras, pointing as well to the ongoing migrant crisis which must be dealt at a European level with all countries sharing the burden.

After yesterday’s meeting with IMF Managing Director Christine Lagarde, the Fund stated in an announcement that is prepared to continue supporting Greece provided that the country will implement a credible program of strong economic policies and that will get a significant debt relief from its European partners to ensure that the debt is on a sustainable downward trajectory. Both sides assessed that “it was a good meeting”, and agreed to establish a direct communication so that both can have a clearer understanding of each other’s positions. 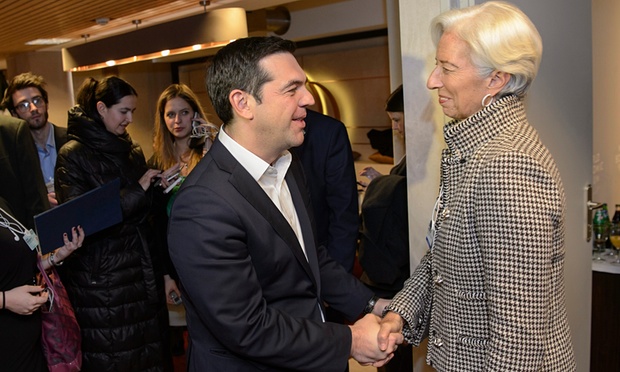 According to European Commission spokesperson Annika Breidthardt Prime Minister Alexis Tsipras had a friendly and constructive exchange of views on the Greek program with European Commissioner Pierre Moscovici. The French Commissioner underlined the importance of an "ambitious pension reform plan" and the need the Greek privatizations fund to start its operation, as main conditions in order for the first review of the Greek programme to be completed soon and successfully".

The Greek economy was also discussed in a meeting between PM Alexis Tsipras and U.S. Treasury Secretary Jack Lew on the sidelines of the Forum on Thursday. According to a press release by the PM’s office, Tsipras presented to Lew the government plan of reforms, as well as the fiscal and macroeconomic data concerning the Greek economy. The two sides also discussed the United States’ position on the need to restructure the country’s debt.

On Davos sidelines, PM Tsipras also talked to U.S. Vice President Joe Biden on Wednesday (20.1) on economic and security concerns. According to the White House “the leaders agreed on the importance of moving forward as quickly as possible on Greece’s economic reforms, including serious discussions with creditors on debt relief”. Greek officials said Mr. Biden and Mr. Tsipras agreed that stability in Greece is important for a stable Europe and that Greece’s economy needs an early agreement on the outstanding issues under its bailout program.