On a two-day visit to Athens to evaluate implementation of the Greek economic programme and discuss the first package of ‘prior actions’ with Greek officials, the European Commissioner for Economic and Financial Affairs Pierre Moscovici noted that there is “a good momentum for Greece” but “three-four outstanding issues need to be resolved before the Eurogroup meeting” next Monday (9.11).

Following his meeting with Prime Minister Alexis Tsipras yesterday (4.11), Moscovici said that every effort is made to assist in the implementation of the reform programme, emphasizing that the European Commission and Greece are building trust, which is necessary to attract investments, with the common aim to achieve growth and restore social cohesion.  Greek government sources said that the commissioner expressed optimism on the progress of the Greek programme and expressed confidence that an understanding will be reached on all open issues such as the non-performing “red” loans and the successful completion of the recapitalization process before the end of the year. 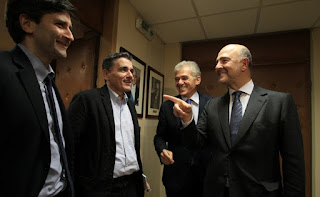 In his remarks following meetings with Greek Finance Minister Euclid Tsakalotos and Alt. Finance Minister George Chouliarakis, Moscovici confirmed that there are “three or four issues still on the table” from the first batch of ‘prior actions’ that the Greek government must settle before the Eurogroup meeting next Monday, in order to open the way for the second batch of prior actions that will allow the disbursement of the 2-billion-euro loan tranche from the third loan agreement.“We are confident that in the spirit of a compromise, the Eurogroup meeting on Monday will be a success”, he added.


Noting that the government has drawn up a clear roadmap that includes bank recapitalization, the completion of the economic programme review and the debate on Greece’s debt by the end of the year, Tsakalotos said he’s optimistic that debt talks will start before Christmas and that Greece will not wait until the completion of the programme review to present its proposals.
fShare
Tweet