In view of today’s EU summit with Turkey in Brussels (7.3), the President of the Democracy Mr. Prokopis Pavlopoulos chaired on March 4 a special meeting of the Political Leaders of the Parties represented in the Hellenic Parliament in an attempt to find common ground on the ongoing refugee crisis. 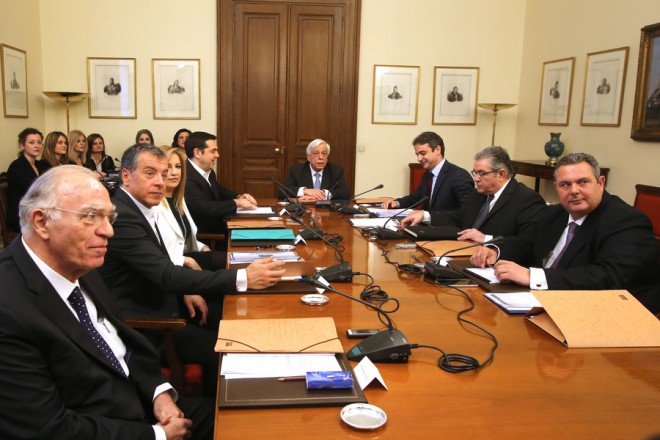 The following statement was issued after the meeting:

The events happened after the Meeting of Political Leaders of November 28, 2015, not only confirmed, but also strengthened drastically the conclusion that the refugee issue is a problem concerning all European Union Member States.

I. In this framework, Greece:

A. Respects fully its obligations according to the decisions of the relevant EU authorities with humanism and solidarity towards refugees, safeguarding at the same time the security of the Greek people.

B. Protects the external borders of the European Union. In this context, Greece not only cooperates with Frontex, but also seeks the enhancement of Frontex to the European Coast Guard, which will be respecting national sovereignty in terms of securing borders. Furthermore, Greece is willing to host the headquarters of the European coastguard, and cooperates fully in the context of the agreed NATO missions in the Aegean Sea, provided that Turkey respects its own obligations.

II. The European Union should:

A.  Impose on all member states full respect of their obligations in terms of fair and proportionate allocation of Refugees, making clear that unilateral action is not permitted and that such action will involve consequences. In this context, the EU must also make clear to all Member States that the frontline countries, Greece in particular, cannot assume the entire burden of hosting refugees entering the European Union, but only her fair share in proportion to her population. In the same context the European Union must speed up the implementation of decisions for relocation of refugees from Greece and Turkey.

III. Promote cooperation with Turkey in order to immediately stop the refugee flows towards the European Union as well as undertake the responsibility of creating a stable and reliable mechanism of movement of refugees from Turkey into the European Union. It should be stressed that the European Union must take seriously into account that Turkey has failed to fulfill specific obligations, endorsed by the summit of November 29, 2015.

D. Provide in due time the necessary assistance to Greece concerning mainly an ongoing financial and logistical support for a humanitarian relief to refugees, taking into account that Greece suffers, more than any other member state, from the consequences of the refugee crisis.

E. Play a leading role in a process of ending the war in Syria - which is the major cause of the refugee crisis and its persistence – in order to facilitate as soon as possible the return of refugees to their homes.

III. The current situation demonstrates the need of adequately revising the Dublin II agreement, even if such a revision would initially be transitional, because of the current emergency situation, until fully prepared and definitely completed.

* Unofficial translation from Greek. Mr. Koutsoumbas and Mr. Leventis did not endorse the issuing of a statement.