Club of Venice’s thematic seminar, entitled "Refugee and immigration crisis: Facing a European problem", took place April 9 on the Greek island of Lesvos, with the participation of over 60 General Directors, Directors and Heads of Communications Services of 23 EU member-states and accession countries, as well as senior representatives from European institutions (European Parliament, Council and Commission), academics and members of think tanks. The seminar was jointly organized by the General Secretariat for Information and Communication (GGEE) and Club of Venice, sponsored by Aegean Airlines. 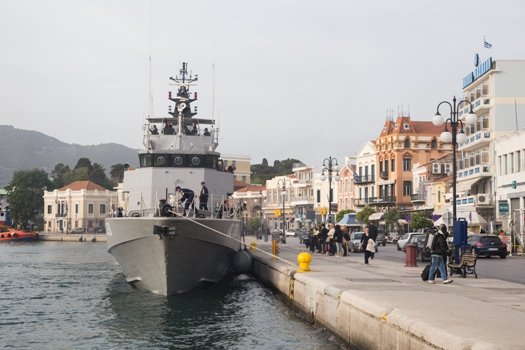 As part of the seminar, delegates took part in a Coast Guard patrol and visited the Registration and Identification Centre at Moria and the Open Hospitality Centre at Kara Tepe, where they were briefed by officials and talked to representatives of humanitarian organizations.

These on-site visits were followed by an exchange of views between participants, during which the Secretary General for Information and Communication, Eleftherios Kretsos and the spokesman of the Coordinating Body for the Management of the Refugee Crisis, George Kyritsis, made brief presentations. SG Kretsos highlighted the role of GGEE at managing the communication side of the refugee and migratory crisis, underlying the huge increase of interest from world media on the issue, while Kyritsis spoke about the mission and operation of the Coordinating Body and presented the lines of action of the Greek state in regard to the refugee and migration crisis.