On a two-day visit to Greece over the weekend (17-18.6), in view of the World Refugee Day on June 20th, United Nations Secretary-General Ban Ki-moon called for a global responsibility-sharing for the welfare of displaced people around the world and praised Greece's 'solidarity and compassion' towards refugees, calling for more international support to the country that has received  in its shores more than 1 million refugees last year.

At a joint press conference after a meeting with Prime Minister Alexis Tsipras in Athens on Saturday (18.6), the UN chief told reporters that Greece had shown “remarkable solidarity and compassion” in dealing with the hundreds of thousands of migrants fleeing war, despite its economic hardship. "Despite the country's economic difficulties, Greece has been generous in saving lives," he said, adding that country deserves the support of the international community and "should not be left to address this challenge on its own". “We must work together to protect people and address the causes of displacement. I continue to call for a greatest sharing of this responsibility across Europe and indeed across the world.”, he stressed.

On his behalf, PM Tsipras reiterated that the refugee and migration crisis constitutes a European and international challenge and should be approached with coherent policy based on solidarity and respect to the human rights. He explained that while Greece experienced an unexpected humanitarian crisis, the government, state and he himself personally was proud on how the Greek people treated the arriving refugees with solidarity and humanity. Tsipras noted though that Greece had taken a big burden on its shoulders and asked for solidarity so that his country could deal with the situation, criticizing the unilateral actions of the neibouring countries to close their borders with Greece. In a symbolic gesture, the Greek premier presented the UN General Secretary with an orange life vest discarded by migrants upon landing in the Greek islands Greece after crossing the Aegean Sea. 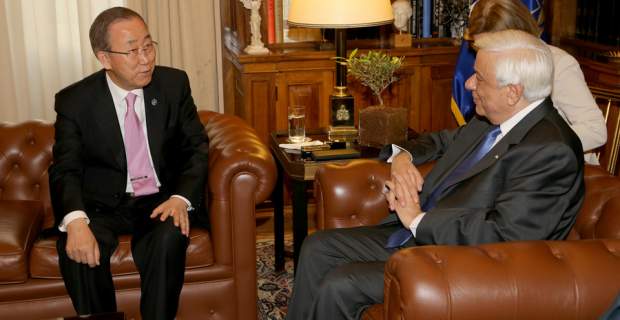 In a previous meeting the day before (17.6), President Prokopis Pavlopoulos thanked the UN General Secretary for handling the refugee issue with a humanism and solidarity and stressed the need for Turkey to implement the deal signed with the EU on migration and for the EU states to do their part on the issue.  Ban Ki-moon also visited the Athens Solidarity Center, run by the NGO “Solidarity Now”, where he spoke to volunteers from various organizations, employees, refugees, as well as representatives of international organizations, reminding that “this is not a crisis of numbers; it’s a crisis of solidarity” and that “the world should be building bridges between people instead of building walls.” 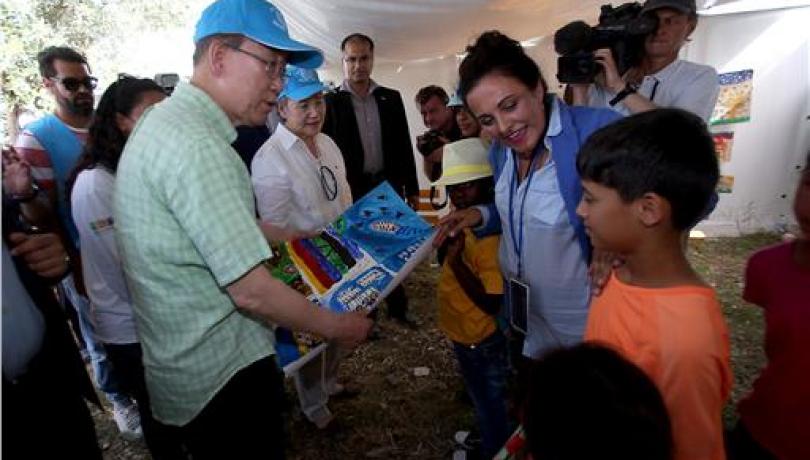 Visiting on Saturday (18.6) refugee camps on the eastern Aegean island of Lesvos, which has been the main migrants' entry point to Europe via smuggling boats from Turkey, the UN chief met with refugees from some of the world's most troubled places and urged the international community to do more to resolve conflicts and called again on the countries of Europe to respond with a humane and human rights-based approach, instead of border closures, barriers and bigotry.

Ban Ki-moon expressed his thanks to the Greek government, local authorities and  humanitarian organisations for their efforts to help refugees and especially praised the people of Lesvos for opening their homes, hearts and wallets to support people in need, reminding that “one of the most beautiful words in the Greek lexicon is philoxenia -- friendship towards strangers.” “Lesvos is the island of peace and your sea is the sea of solidarity," he said.

Over a million migrants have sailed to Greek shores since January 2015, but the rate of migration has fallen drastically since March this year due to an EU deal with Turkey and after the Balkan states, situated north of Greece, started closing their borders to newcomers, effectively cutting off their path towards Western Europe. The Greek authorities say that some 56,000 migrants are currently still trapped in the country, including some 3,400 in Lesvos.