First school bell for refugee and migrant children in Greece

The new school year is starting in Greece and about 800 substitute educators have been brought on to teach at least 2,000 refugee children and as many as 22,000 migrant children, in order to implement the government’s promise of including all refugee children in the public school system. Minister of Education Nikos Filis said the ministry´s services are "prepared to enroll thousands of refugee children," noting that that refugee and migrant children will initially be schooled separately as the integration process will take time. "We will try to soon have Greek and refugee children together in schools," he said. 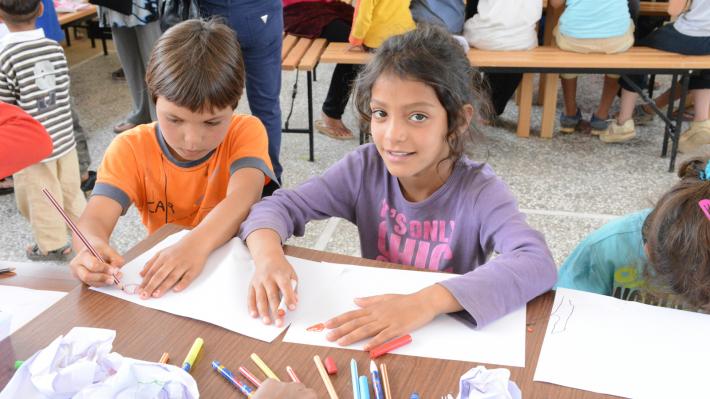 The ministry of Education has developed an annual preparatory programme for the integration of school-age refugee children into the country’s formal educational system. In the initial phase of the programme, the focus will be on the mandatory education, i.e. from kindergarten to junior high school level. For children 4-7 years old, kindergarten branches will be established within the refugee reception centers; children 7-15 years old will be admitted to special afternoon Reception Classes in nearby public schools. For the 2016-2017 school year, classes will focus on Greek and English language classes, mathematics, computers, physical education, and arts, with the aim of preparing children for intergration either in the Greek education system or in an EU school -in case their family is relocated. About 800 such classes are expected to operate, each accepting 10-20 students.

The Institute of Educational Policy (IEP), the ministry’s academic institution competent for primary and secondary school education, will be responsible for coordinating and managing the kindergarten and Reception Classes, as well as conducting the diagnostic testing on the basis of which children will be admitted to classes. As is specified by the ministry, International Organizations or NGOs may be active in the area of refugee education outside the formal schedule of the kindergartens and Reception Classes, only once they receive accreditation from Institute of Educational Policy. The monitoring and supervision of all educational activities within the reception centers will be carried out by special Refugee Education Coordinators (SEP).

The cost of recruiting the increased number of teachers and substitute teachers necessary will be covered from the European Fund for Asylum, Immigration and Integration (AMIF). Transporting the children from the reception centers to the neighboring schools, as well as the additional costs for cleaning and maintenance of schools is funded by the International Organization for Migration (IMO).

Addressing questions over the intergration of refugee children in Greek public schools, minister Filis stated that “the vast majority of Greek citizens - institutions, the government, political parties, the church, and municipalities - have tangibly supported refugees and have exhibited solidarity, love, empathy and support.” Furthermore, he underlined that “it is not a matter for local societies or local school boards to decide where the refugee children will attend classes,” reassuring however those who cite health concerns that “the state and competent health authorities have taken all preventive measures, including vaccination.”