PM Alexis Tsipras on the Refugee crisis and Greek debt 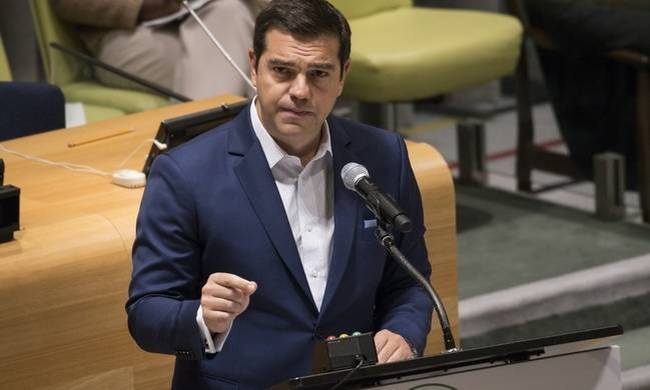 “The message I delivered at the 71st UN General Assembly (Leaders Summit on Refugees hosted by US President Barack Obama) is that Greece is at the forefront of the refugee crisis, providing humane and effective management in accordance with international law. We need comprehensive solutions that respect human rights and provide legal routes for refugees, resettlement assistance and support to entry countries” noted PM Alexis Tsipras in his Facebook page (Alexis Tsipras Intl).

PM Alexis Tsipras stressed that the refugee crisis we are facing today is a global challenge: "We will either manage to address it together and according to the international law, or we will fail." "One of the parts of the world that is mostly tested today is Greece. A country that has dealt with 1.2 million refugees and migrants in less than half a year. Where approximately 60,000 refugees and migrants remain trapped, since our northern borders closed because of other countries' unilateral actions. If we were talking, for example, about Great Britain, this figure would correspond to a population of 520,000 refugees and migrants," the Alexis Tsipras said.

Tsipras underlined that the Greek Asylum Service, which did not even exist three years ago, manages the fourth largest number of asylum applications in Europe while the Greek authorities, together with European and Turkish ones, are trying to implement "the very difficult but necessary EU-Turkey Agreement, leading to a drastic reduction of flows and, most importantly, deaths in the Aegean Sea - replacing the unlawful, dangerous path of the Aegean with a legal route to Europe."

"If this effort that is taking place in Greece - with the support of several EU countries - fails, the only winners in Europe will be the most xenophobic and nationalist voices. Forces that believe that the application of international law is a luxury and the sharing of responsibility is something unacceptable", he said and stressed the need for a strong international initiative that will set a new global framework for refugee management and weaken the xenophobic anti-migrant agenda.

Tsipras said necessary action included an acceleration of relocations, reinforcement of Greece's asylum service by the EASO, closer cooperation with Frontex in the Aegean and Greece's northern borders and immediate implementation of decisions for a European border and coast guard. "This framework must be strengthened: the support to countries hosting refugees, the return of people who are not entitled to international protection as well as the resettlement and relocation of those who need it, the initiatives to address the root causes of migration, including initiatives for peace in Syria, and police cooperation against human trafficking networks. Such a global framework is today more necessary than ever. And Greece is well aware of that," he concluded.

Greece needs a stable and sustainable solution on debt

The Greek prime minister also raised the issue of the IMF and its differences with the EU institutions on the subject of debt. As he said, Greece is not interested whether the IMF will decide to stay or leave the bailout programme as long as a stable and sustainable solution is found. Tsipras told Biden that the first and most difficult programme review has been successfully concluded, the Greek economy is recovering and finally, that the agreement with the institutions and the IMF is being implemented by Greece, but it needs to be implemented by everyone.

Biden praised Greece on the way it has dealt with the refugee crisis and added that the US puts emphasis on stability in Europe and "Greece is an integral part of European stability."

Tsipras and Biden agreed to be in constant contact on the initiatives and the issues raised by the Greek prime minister. It is estimated that for the US, the debt issue is closely linked to stability in Europe, to the potential for bigger investments, and to a more stable economic climate worldwide.

Alexis Tsipras scetched out the path for Greece to exit crisis in an interview with Reuters on Wednesday 21/9. Alexis Tsipras told Reuters that government revenues and tourist flows have been strong and that Greece could grow by 0.2 to 0.4 percent this year, well above Eurostat's forecast for a 0.3 percent contraction.

He also said he hoped Greece could, within the next six months, be included in the European Central Bank's quantitative easing (QE) program from which it has so far been excluded because of its low credit rating. If that happens, it could test markets’ appetite for Greek debt next year. "I think that will be a strong message we will be ready to prepare the procedure to issue bonds," he said.

Speech at the Concordia Summit

For Greece to enter a path of sustainable growth, its lenders will have to do their duty to restore the viability of its debt, PM Alexis Tsipras said in a speech at the Concordia Summit in New York on Tuesday evening, noting that given the agreement with the EU institutions and the IMF, “that time is now”. Tsipras said that this year marks the turn of the economy from recession to economic recovery. However, he noted “for our country to enter the path of sustainable growth, our creditors should do their part in restoring the sustainability of our public debt. According to the agreement, the time to do so is now.”