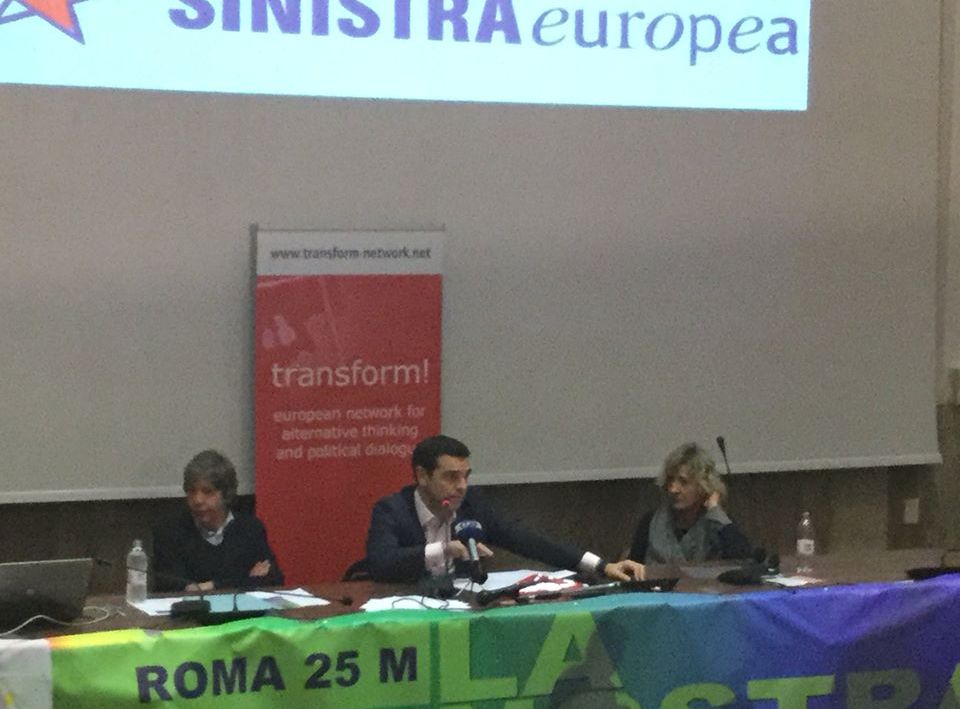 Europe is not defending its own accomplishments, its heritage and social model and has surrendered to the International Monetary Fund (IMF), which explains its existential crisis, Prime Minister Alexis Tsipras said on Thursday evening (23.3.2017), addressing an event organized by the Transform! Europe network, in Rome’s “La Sapienza” University. “We are at a critical moment because these days Greece is on the front line of a battle that concerns all of Europe. We are fighting to restore collective labour agreements in our country, to end the exemption status now and once and for all in the future,” he said.

Continuing his speech at the event titled “A Europe for the People and by the People”, he said this is the reason his government didn’t give up two years ago, because it knew it would have the opportunity to fight for the rights of the social majority from a better position “and now we have this position”.

Alexis Tsipras warned that Europe today has become almost exclusively an area of austerity, of deregulation of social and labour rights and of closed borders for political refugees and migrants. “Neoliberalism has almost devoured Europe,” he said, adding that “it’s the neoliberal management of the economic crisis that augmented the existing inequalities and asymmetries within our countries and between them. It took the form of a systemic attack of the capital against labour,” he explained.

Watch Alexis Tsipras adressing Transform Europe / Party of the European Left event at the University of Rome: ‘A Europe for the People and by the People’ - 23 March 2017, 17:30: 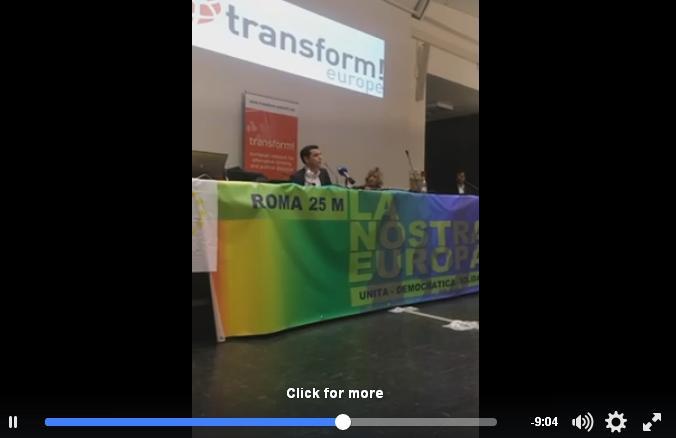 Beyond the widening of the gap between the European North and South, the crisis also deepened the divisions in Europe through aggressive and irrational stereotypes. “Thankfully it is few [people] who want to hide the economic inequality caused by neoliberalism behind a non-existent cultural division. They do it by resorting to ridiculous stereotypes and prejudiced rhetoric of a ‘prudent North’ and an ‘irresponsible South’,” he said. He then openly criticized Eurogroup president Jeroen Dijsselbloem for his recent comments about debt-ridden nations wasting money on “booze and women”. “When budget deficits are high, the euro area requires action to reduce public spending. Therefore, shouldn’t Mr. Dijsselbloem, instead making foolish and sexist comments on ‘booze and women’ ask Germany to increase public spending, given its high current account surpluses?” he asked.

Ιn a letter addressed to EU Council President Donald Tusk and Commission President Jean Claude Juncker, PM Alexis Tsipras expressed Greece's intention to support the Rome Declaration “which moves in a positive direction”. “Nevertheless, in order to be able to celebrate these achievements, it has to be made clear, on an official level, whether they apply also to Greece,” the Greek prime minister stressed:

"...The Greek government, for the last two years, is trying to return Greece to the standards of the European social model and to overturn the status of exception in the case of labour relations.

We fully respect the commitments we undertook for the necessary budgetary adjustment and the restructuring of the economy and the labour market which we have followed strictly.

Nevertheless, we cannot understand demands that go beyond these commitments, like the prolongation of the exception of Greece from the European social acquis. This demand, after all, leads to an unjustified delay of the conclusion of the second review of the Greek economic program, denying from the Greek economy its great potential for recovery, at a crucial moment.

It is evident that the responsibility for defining the policy framework and its institutional boundaries within the EU, does not belong to non-european supranational organizations, but exclusively to European institutions and the intergovernmental bodies of the European Union.

As we move towards the Rome Summit, I assure you that Greece would like to celebrate, together with its partners, this 60 year anniversary and more specifically the great common achievements of our peoples. For this reason we intend to support the Rome Declaration, a document which moves in a positive direction.

Nevertheless, in order to be able to celebrate these achievements, it has to be made clear, on an official level, whether they apply also to Greece. Whether, in other words, the European acquis is valid for all member states without exception, or for all except Greece.

Therefore I ask for your support in order to protect, together, the right of Greece to return to the standards of the European social model."

The discussion about labour relations in Greece and the non-implementation of the EU acquis puts the European Commission in a difficult position. Speaking at the European Parliament this week, embattled Eurogroup President Jeroen Dijsselbloem stressed that collective agreements in the Greek labour market should be restored, but still has to be decided by the country’s creditors.

Read the full letter in Greek: http://docdro.id/Kci7nBh and in English [unofficial translation]: https://tinyurl.com/n7cehqc

Sources: Tsipras: Europe has surrendered to the IMF and this explain its existential crisis; Tsipras asks Juncker if the ‘European acquis’ applies to Greece; EU's future prospects the focus of Kotzias-Gabriel meeting in Athens 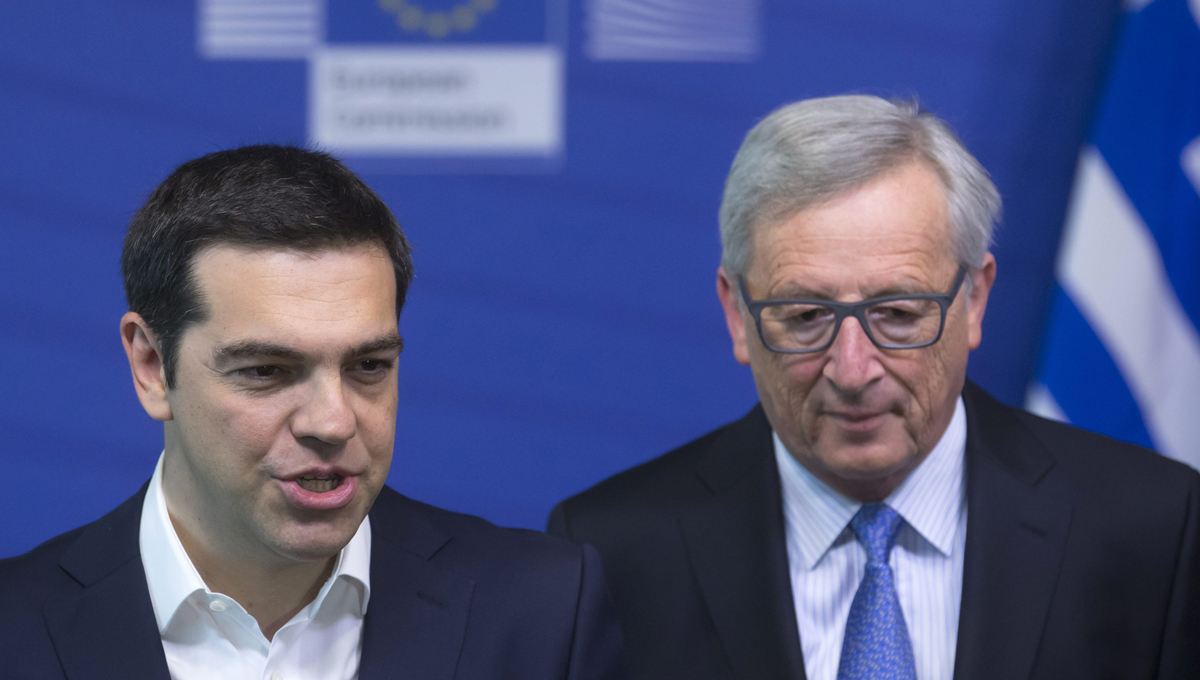