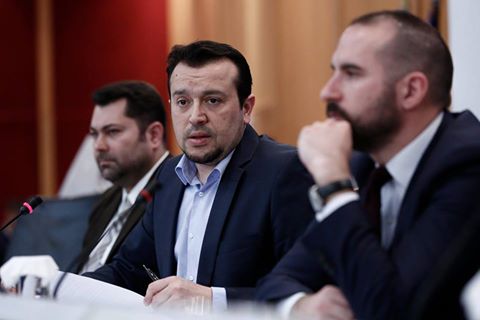 Minister for Digital Policy, Telecommunications and Media, Nikos Pappas, notes in his interview with Avgi newspaper (Europeanization Without Federalism is an empty promise, April 9) that there have been very positive recovery signs in the Greek economy recovery. As he underlines, it is clear by now that negotiations are an issue of "political conflict", so the importance of an overall change in European politics towards federalism becomes evident. "What is important are the initiatives to be taken at European level... Europe, to be saved, needs European solutions in the direction of consolidation, debt mutualisation for example, and we should seek them in the immediate future”, Pappas underlines.

The main Q&As of the Minister’s interview are:

After Malta, has the time of (dealing with) the debt issue come? Wolfgang Schaeuble stated there will be no need for a new programme.

I think that this statement marks a retreat from previous positions. In any case, you realize that the talk about zero-sum fiscal interventions for 2019 and 2020 goes along with the agreement to restructure the debt, for the reason that the debate on interventions after the programme started following certain demands for the IMF to remain. In order for the IMF to continue participating in the programme, zero outcome measures for 2019 and 2020 are required together with measures for debt relief, as the IMF itself has made clear.

We have lost, however, valuable time in the economy. Can be it recovered?

Yes it can, and I'm not at all sure that there is a slowdown in the economy, as some like to suggest. The economy of course is not as yet totally free from uncertainty, as could have been the case four months earlier. But, yes, I think it could overcome, because the dynamics that the Greek economy has demonstrated are deeply rooted. In 2016 there was an increase in exports by 12%, in investments by 10% and in private consumption by 5%, respectively. Since the beginning of 2015, some 230,000 new jobs have been created. I am talking about macroeconomic indexes that indicate a robust recovery trend. There are, of course, two ways to undermine this: either by stalling the evaluation and reviving uncertainty or by accepting what the IMF was saying from the start about further austerity measures which would get us back into recession.

Will subsequent evaluations involve the same drama? Even when there was no reason, lenders have shown they can create artificial obstacles.

It’s clear by now to all that this is an issue of political conflict. There are no economic reasons justifying these delaying tactics. The primary surplus for 2016 will be way over 3% or even 3.5%, and thus what lies bare in the public debate are the political motives of those wishing to procrastinate. There is a huge lesson however here. We must strengthen our rhetoric and actions for serious changes to be made at European level because the European governance model has shown its limitations and has vindicated our criticism of it for some twenty years. To sum up, I would say that Europeanism without federalism is meaningless. Those proclaiming to “remain in Europe” without advocating radical changes including a European unemployment allowance, a higher EU budget, a banking union and the strengthening of the European Parliament and Commission powers, would appear to be treading on ideologically shallow ground. In retrospect, it was proven that what those “remaining in Europe” meant was for Europe to remain as is.

We could see however that the dominant powers of Europe are against these considerations.

What prevailed in Europe in the last twenty years was what the Left had very aptly described as "neoliberal consensus", a policy resulting from the combination of social democrats with conservatives. This recipe now is before an impasse; Europe is at a crossroads: it will either go towards the far right with a return to nationalism, the ideology of hatred, or will favour instead the progressive and left agenda. It appears that parts of social democracy have begun to revise the strategic choices made in the past two decades.

But the conservative faction, which is dominant in Europe, persists.

I would like to remind you that as a matter of course we maintain that Europe is the field of conflicts and political rivalries. This will not stop happening. The conservative party has proved that it cannot guarantee the EU's future. We favour Europe for very specific reasons; because we believe that Europe is the minimum geographical and political area within which governments, politics, the Left can halt the markets agenda. No one can claim today that a country of our size alone could implement progressive policies to a larger extent against the interests of capital markets.

Going back to Greece, will the programme be viable in the long term on a social, economical and political level?

Apart from the fact that the economy has shown positive signs in budgetary terms, which in subsequent phases will leave us a margin to exercise an even more active developmental and social policy, what is important are the initiatives to be taken at European level. Conservative leaders think -or propagate- that they have saved Europe by implementing the 2010 and 2012 programmes in Greece. Debts cannot be repaid with eternally high surpluses. Europe, to be saved, needs European solutions in the direction of consolidation and debt mutualisation for example, and we should seek them in the immediate future.