Leader of New Democracy on Populism, the Need for Trust and a New Vision for Greece 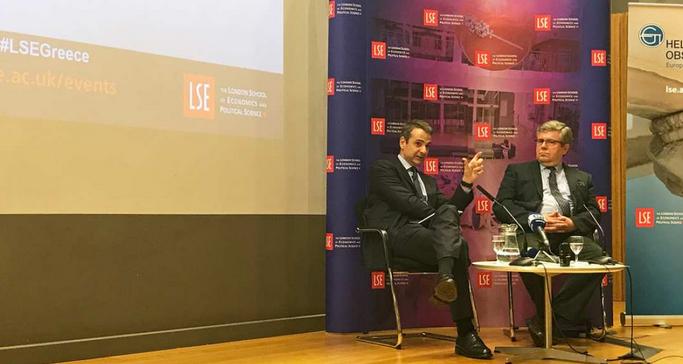 President of the main opposition party, New Democracy, Kyriakos Mitsotakis delivered a public Lecture in the form of discussion with Head of the LSE’s European Institute, Prof. Kevin Featherstone, at the LSE Hellenic Observatory on May 15, 2017, titled “Defeating populism, defending the truth and unleashing the potential of the Greek economy”.

The President of New Democracy stressed that the central cleavage in politics is not between the right and the left, but between populism and what is called today “moderate and liberal rationalism”, underlying that populism is problematic, regardless if it comes from the Right of the Left. He commented that the new measures add an unnecessary level of austerity on Greece and that they were the price the Government pays for its delay and lack of commitment to the reforms. He estimated that the measures are going to be implemented, while the countermeasures are not, because the target of 5,5% primary surplus cannot be reached. Kyriakos Mitsotakis underlined his commitment to reforms as well as to the renewal of the Party he leads and noted that the key issue for him is the reestablishment of trust.

During the discussion, Kyriakos Mitsotakis underlined he had been asking for early elections since last April. He thinks the longer the current Government stays in power, the biggest damage it will do to the economy. “We are faced with a huge austerity package and essentially what we have is a fourth programme without additional funding, economy is back in a recession, there is no growth in 2016, 2017 has been a bad year so far and the more time we lose, the more we pretend that we are reforming, the more damage will be done to the country on the economic front”, Mitsotakis added. He noted that he is also concerned about what is happening with other issues in the public domain and blamed the Government for rolling back reforms in education, the situation of the health care system, the return of clientelistic policies in public administration and an unacceptable level of intervention in justice and the media.”We have made it very clear from the beginning that we cannot impose an election, but that does not mean that we are not going to call for one”, he concluded.

He defined populism as a political attitude which entails simplifying problems, placing the burden for what is happening in the country on someone outside the country and appealing to raw emotions. He underlined that the distinction between populism from the Left and Right is not significant. The central cleavage in politics today is not between the Right and the Left but between populism and what is called “moderate and liberal rationalism”. He stressed that populism is problematic, regardless where it comes from.

Mitsotakis went on to say that the way SYRIZA dealt with IMF is populist in nature. Some of IMF’s arguments were correct, such as the need for low primary surpluses and a bigger intervention on the debt side, but the Government did not take advantage of the fact that some positions of the IMF were actually aligned with the Greek interests. The financial programme for Greece will end in 2018 and Greece is called to legislate post – programme fiscal measures for 2019-20 equaling 2% of GDP, 1% for pension cuts and 1% for additional revenue by lowering the tax threshold. The Government has come back with countermeasures that is, if it achieves a 5,5% primary surplus, it can implement additional 2% fiscal counter measures that can help to bring down primary surplus to 3,5 %. ”It’s a big question who believes that Greece can produce a 5,5% primary surplus”, he affirmed. He estimated that the measures will be implemented, while the countermeasures will not. The measures were unnecessary, he said, because none asked for them 6 to 8 months ago, “but there is a cost when you delay, when you pretend that you are negotiating and lose credibility. As long as the Government is not committed to real reforms we will be asked for additional fiscal austerity and that is the wrong recipe for Greece”, he added. 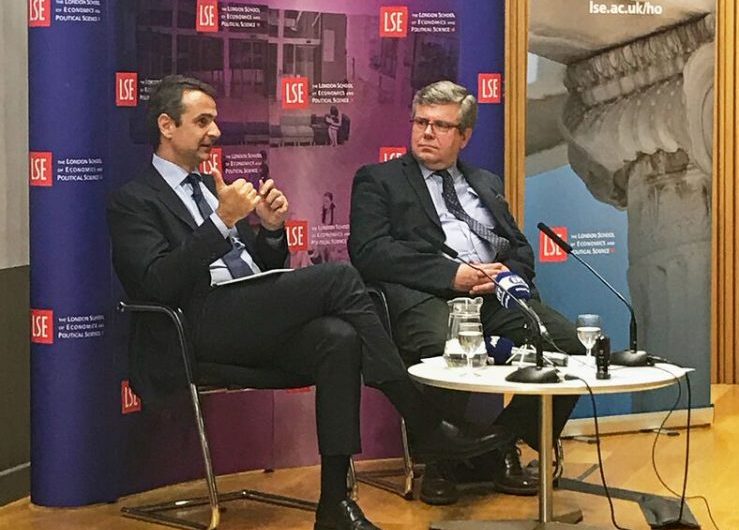 Regarding debt relief, he indicated that the initial commitment for a solution for the debt issue exists since November 2012, so a solution should have come earlier from the creditors’ side. He tagged Tsipras commitment that Greece will produce a 3,5% primary surplus for many years in the foreseeable future as highly problematic and he said that he will try to convince the creditors to change that, when he comes to power. Mitsotakis concluded that a “grand deal” of trading real reforms for fiscal space is necessary.

Professor Featherstone asked Mitsotakis about Tsipras statements after his successful meeting with Lagarde in China, that if the IMF is not going to participate and if there is no agreement on debt relief, then Greece should not implement the current reform measures. Mitsotakis commented that there is no provision for that in the law. He commented that the new measures add an unnecessary level of austerity on Greece, especially on the weakest parts of the society, accusing PM Tsipras of being unreliable.

Regarding if his Government will have bigger credibility with the creditors, he answered that as a former Minister of Public Administration he tried from his thankless post to promote Reforms, so he has a “track record” of his commitment. His public statements have always been pro reform and this was the actual reason he was elected as New Democracy President.

Featherstone mentioned that Mitsotakis is more popular than the party he’s leading and asked what he is going to do to transform his own party. Mitsotakis argued that a lot of changes have already taken place in New Democracy, the most important of which is the open call for new members, something that was unprecedented in a major party and which means a major renewal of the party lists for the next elections. If New Democracy is elected, the new Government will consist of a significant number of people such as academics and businessmen who are not traditional politicians.

Defining what the term liberal means to him, Mitsotakis said that he is a classic liberal, which means he believes in freedom, a smaller but efficient state, lower taxes and regulating markets as opposed to over regulating. He mostly believes that people should have equal opportunities at the beginning of their lives, which means a bold reform in public education, especially for those who cannot afford for private education. As far as Public Administration is concerned, smaller state means employing fewer public servants than those who retire, not firing. Many functions that are currently performed by the State can be outsourced instead, so there is significant space to rationalize the role and the footprint of the State and reduce bureaucracy through e Government, Mitsotakis concluded. 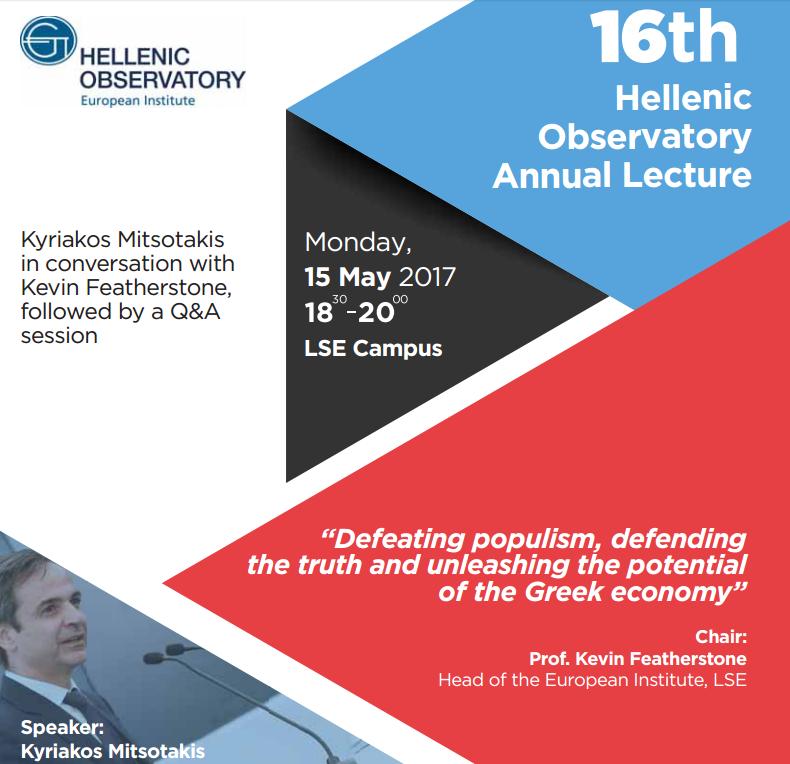 Featherstone commented that 35% of Greek population is close or below poverty threshold and asked what New Democracy plans for them. Mitsotakis underlined that ND was first to establish minimum income. At the end of the day, he insisted, the solution is job creation and that is the New Democracy agenda. This also means skills and continuous training. He noted that there a great shift to agricultural production combined with innovation and, in order to support it, lifelong education is needed as well as good use of EU funds.

Asked what the new narrative he has to offer is, he answered that the key issue for him is to reestablish trust. Greece suffers from a lack of trust to its institutions and its politicians and it needs a great vision.

On migration, he commented that it is not only a Greek problem and blamed the Greek Government of being a hostage to its leftist ideological constraints, especially in separating economic migrants from refugees and being inefficient in benefiting from EU funds that have been made available to Greece and processing asylum applications, after the Agreement between EU and Turkey.

He also noted that it will be difficult for Greece to create the necessary fiscal space if it sticks to the 3,5% primary surplus target and that a target of 2% is more reasonable, that cutting some expenses in the Administration would make cutting tax possible, but still the truth is that the creation of fiscal space will come from a Grand bargain with the creditors.

Last, he stressed that there is a booming ecosystem of start ups in Greece. Start ups need access to capital, so more venture capital funds are needed. Generous tax breaks are needed for these businesses for the first two or three years of their existence, simplification of regulatory burdens for new companies and of course, there is the issue of social security contributions as well as connectivity to Universities.