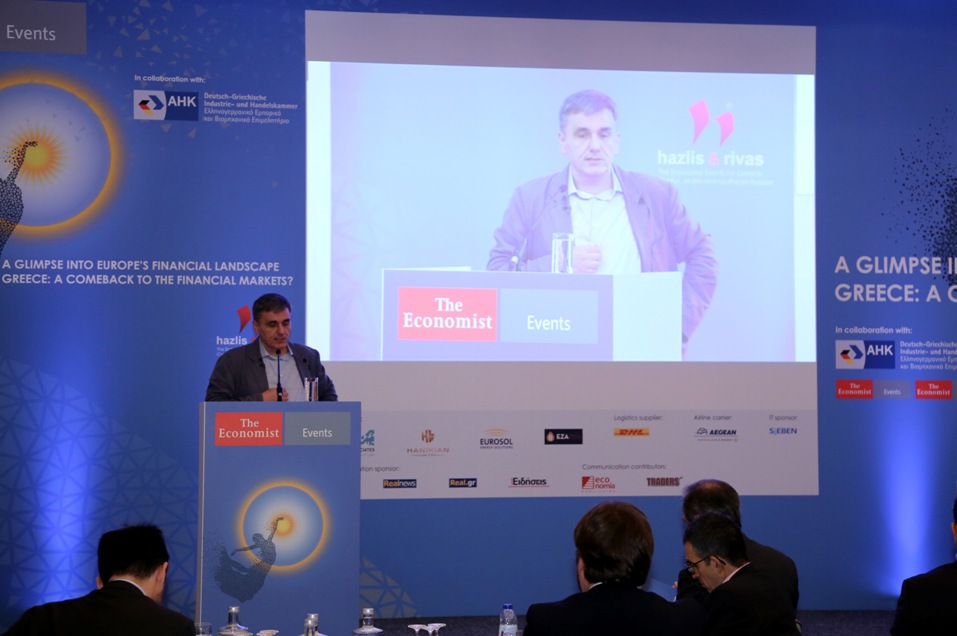 “Goodwill on all sides during the euro group meeting in June will allow us to reach an agreement that provides clarity on Greece’s debts and allows the economy to further improve,” Finance Minister Euclid Tsakalotos told the German economic newspaper Handelsblatt (Greek Debt Showdown, 6.6.2017).

“Germany and the IMF have to provide clarity when it comes to the issue of debt relief and send a clear signal to the financial markets that no investor has to be scared of investing in Greece,” Tsakalotos stressed. He added that this would also show the Greek population “that they can finally look ahead with some hope.”

The Greek economy is expected to grow by 1.1 pct this year and by 2.5 pct in 2018, the OECD said in its Global Economic Outlook report released on Wednesday. Referring to Greece, the Paris-based organization said the country's primary fiscal surplus will fall from 3.8 pct of GDP in 2016, but will remain at high levels, above 2.5 pct of GDP this year and in 2018. OECD said the country's public debt has stabilized but remained very high and demanded "additional debt relief to ensure a medium- long-term fiscal sustainability".

"Debt relief, including maturity extension of loans and additional grant periods would reduce vulnerability, raise growth and strengthened the country's ability to manage its debt burden. Debt relief would pave the way for participating in ECB's bond-buy program and combined with a further progress in structural reforms and tax improvement, would allow a reduction of tax rates and greater public spending on high-quality investment programs," the OECD noted.

Finance Minister Euclid Tsakalotos asked for a clear-cut solution on the Greek debt, speaking at an Economist conference held in Frankfurt titled “A glimpse into Europe’s financial landscape-Greece: A comeback to the financial markets?” (31.5.2017).

"It seems there’s wide agreement that Greece has met its commitments concerning reforms," Tsakalotos said adding most sides are amazed by the degree to which the country has kept these commitments, as well as the range and depth of the reforms.

He stressed that "In fact the news from the Greek economy, especially at the micro level is very promising. We have had industrial production rising in March about 8,7% year on year, the sixth consecutive month of positive growth. Manufacturing has been particularly strong, 8,6% year on year in march. Sectors with strong performance include petroleum products, basic metals and pharmaceuticals. Retails are up 4,6% year on year in January - February, passenger car registration rose by 22% in  January - April. Unemployment is begging to fall: we had the last 4 months a net increase in jobs of 125. 000. Exports are especially doing well: in 2016 they rose in real terms by 6%..."

“After such an effort, what the Greek government is asking is clarity on the debt issue. And this was not achieved at the Eurogroup table on May 22. Clarity is very important; it is important for the Greek people, as after many years (…) there’s a prospect for a new start. It is also very important for investors. Investors need to know in which way Greece will be able to meet its borrowing obligations in the short and long term. So it is absolutely crucial for growth to have clarity. That is what we are calling for at the Eurogroup meeting in June,” he added.

Tsakalotos also spoke about the stance of the International Monetary Fund (IMF), noting that the Greek government is asking for clarity and that in the last Eurogroup it claimed that the measures taken, or which will be taken on debt relief are not enough for make it sustainable.

“The IMF promised to participate in the program on August 2015. It’s been two years since then. We’ve only got 14 months of a program to go. It seems to me that it’s time for the IMF to make up its mind on what it wants to do and what it thinks needs to be done,” the minister said. He continued noting that Germany and the Netherlands have indicated they will refuse to lend more money to Greece without the IMF’s participation. “Either because they believed that this would ensure a stricter program or because they believed that European institutions lacked the know-how. If so, then the IMF cannot be good for structural reforms and advice on structural reforms (...) but not have an opinion on the debt relief needed,” he explained, adding the two countries must find a compromise with the IMF on debt sustainability.

Benoît Coeuré, member of the Executive Committee of the European Central Bank, αλσο stressed the need to lift the uncertainty over the sustainability of the Greek debt in order to restore the confidence in the Greek economy. Clarity over the debt measures is also a prerequisite for a possible participation of the Greek bonds in ECB's quantitative easing programme," said Coeuré. "We are sorry that the debt relief measures were not defined at the last Eurogroup meeting. The deliberations are in progress, but I believe that it is important to reach an agreement at the Eurogroup meeting on June 15," he added.

Governor of the Bank of Greece, Yiannis Stournaras, stressed the "huge progress" that has taken place in Greece since 2010 in the correction of the imbalances. "It is a unique and unprecedented progress in Europe and the OECD," he said, noting that there is still much to be done and that high debt and high unemployment are still problems that make the Greek economy difficult. In his speech, mainly on whether we are near the return of Greece to the markets, Yiannis Stournaras stressed the need to resolve the debt issue as a key condition for the recovery.