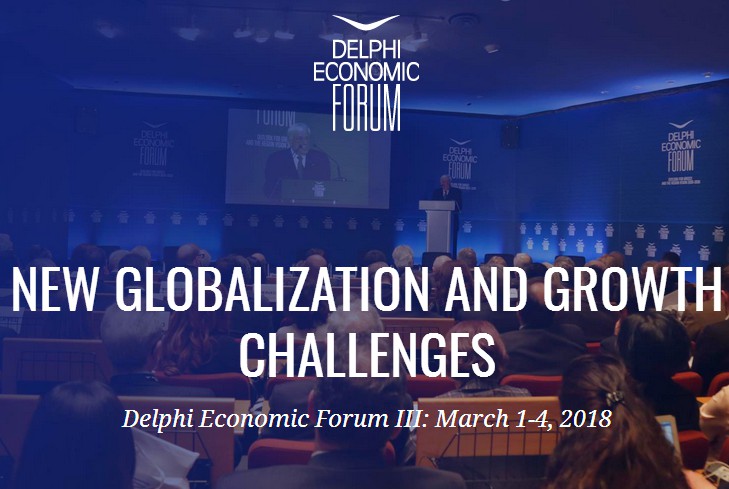 Delphi Economic Forum III was successfully completed on Sunday, March 4, 2018, after four days of sessions. The forum, organized under the auspices of the President of the Hellenic Republic Prokopios Pavlopoulos and with the partnership of many Greek and international businesses, took place on March 1-4 at the European Cultural Centre of Delphi and brought together more than 400 speakers and over 1000 delegates from the field of business, economics, politics and science, from across the globe , who discussed a great number of topics concerning the economic future of Greece and the EU, in 55 different sessions.

Delphi Economic Forum is a nonprofit, nonpartisan organization founded by a group of Greek businessmen, law experts and researchers and working in close cooperation with civil society, public organizations, businesses and individuals. It engages business, political, academic, and other top experts in an effort to address emerging challenges, influence the national and regional agendas and promote sustainable and socially responsible growth policies for Greece, Europe and the wider Eastern Mediterranean region.

The opening statement for the Forum was given by Danièle Nouy, Chair of the Supervisory Board at the European Central Bank, who commented on the current state of European banking sector and opportunities to improve profitability, while was officially declared with an inaugural address by President of the Hellenic Republic, while the official ceremony that followed later featured keynote speeches by Prokopios Pavlopoulos, Boyko Borissov and Dimitris Avramopoulos. On the same day, Martin Wolf of the Financial Times (UK) interviewed Leader of the Opposition Kyriakos Mitsotakis, who stressed the importance of prioritizing investments.

On the second day, a number of sessions addressed matters such as the fourth Industrial Revolution, European structural reform and the West’s relations with Russia. Prime Minister Alexis Tsipras gave a keynote speech, stating that Greece has enhanced its potential to attract investors. The Forum’s third day featured sessions analyzing subjects such as the future of Media in the times of “fake news”, populism, political polarization in Greece, entrepreneurship and innovation, and the European Bank of Reconstruction and Development’s Report for the current economic year. Emphasis was also given on Greek tourism and a national plan for the rehabilitation of the country.

On the last days, the issues of migration policies and sustainable debt strategy were discussed, as well as the remaining challenges for a full restoration of Greece’s position in the Eurozone. In his address, Declan Costello, EU Mission Chief for Greece’s 3rd Economic Adjustment Program, acknowledged the progress made by Greece, and posed the question of a sustainable economic rebound in the middle to long term, while ESM’s Klaus Regling stressed the importance of prioritizing growth and the continuation of reforms.