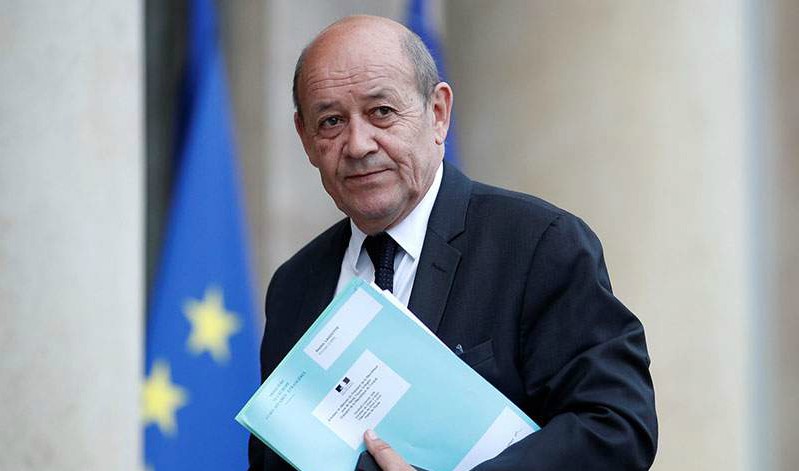 On the occasion of his visit to Athens on Thursday, 6 September, French Minister of Europe and Foreign Affairs Jean-Yves Le Drian was interviewed by Petros Papaconstantinou for the Greek daily newspaper Kathimerini. Le Drian answered to questions regarding Greece’s current financial and political position in the EU, its relations with Turkey and FYROM and the migration issue, as well as the various challenges faced by the EU.

Greece has just emerged from Troika's custody, but its debt remains colossal, and the French proposal to link the repayment to GDP has not been adopted. Do you think additional measures will be needed?

The exit of Greece from the third financial assistance program is a historic moment. It is the recognition of the efforts of the Greek people, the fruit of its government's steadiness in the implementation of reforms and the proof that European solidarity is effective. Last June's Eurogroup took the necessary measures for debt. Greece has created a reserve buffer. Now, the Greek economy must continue its recovery and take advantage of Greece's amazing opportunities. Be sure that France will continue to be at her side.

Are you concerned about rising tensions in the Aegean and the challenging of the Lausanne Treaty by Ankara?

Turkey is an important interlocutor and partner for France, for Greece, for Cyprus and for Europe. That is why the President of the French Republic has for over a year now begun a close dialogue with President Erdogan, which allows us to approach all points of disagreement with openness and sincerity. In this context, we have already spoken to our Turkish interlocutors about the issues that concern us over tensions in the eastern Mediterranean. At this point, I would clearly like to assure our Greek and Cypriot partners of our vigilance and solidarity.

Turkey has moved away from its European perspective in recent years. Do you think that the goal of full integration continues to make sense or should the EU consider pursuing a special relationship with Turkey?

For many years now, the Turkish government has made choices that move it away from the European Union and its values. Under these circumstances, it would be deceptive to believe that we can have progress in the process of Turkey's accession to the European Union. The President of the French Republic has told Mr Erdogan so, and has since had the opportunity to repeat it. In any case, we have to cooperate, the European Union and Turkey, for our common interests, on an economic level (which is why we need a prosperous and stable Turkey), as well as on immigration and counter-terrorism issues. Finally, on regional issues, where we need to continue the dialogue without respite, particularly in relation to the situation in Syria, because Turkey is an undeniable factor there.

Migration threatens EU cohesion, and despite the decisions of the June summit, Central European countries are turning to unilateral actions and revision of the Dublin regulation remains a blank letter. Do you think it is still possible to have a European solution?

A European solution is a necessity because only at a European level will we be able to respond to the immigration challenge effectively and in accordance with our values. France has a clear line, based on the right of asylum, on European solidarity, on the responsibility of everyone and on the protection of our external borders. This was the foundation of the European Council's agreement last June. We want to move forward along these principles in the run-up to the Summit in Salzburg, on the 20th of September, in partnership with all member states who intend to contribute to a European and cooperative solution.

What do you expect from the September 30 referendum in FYROM? Why was France somewhat cautious about EU enlargement to the Western Balkans?

The agreement signed on June 17 has historical characteristics because it is about resolving a bilateral dispute that has lasted 27 years. We are very keen on this agreement and it is therefore important that the result of the referendum is positive. On this basis, it is then up to Greece to ratify the agreement. The agreement will benefit both countries, strengthen stability in the Balkans and in Europe in general. Already the Atlantic Alliance has decided to invite the Skopje government to start talks to bring the country into NATO. The Athens-Skopje Agreement also contributes greatly to good neighborly relations, which are the essential prerequisite for the European approach to the region. The European perspective of the Western Balkans was highlighted in Thessaloniki in 2003 and was reaffirmed last May at the Summit in Sofia. We fully support this prospect because it is in the interest of the countries concerned but also in our own interest. It is also important for enlargement to remain a demanding process: candidates must meet certain conditions, for example in the field of the rule of law. The European Union must also ensure that it is in a position to welcome new members under good conditions. If we do not follow this path, when enlargement takes place, it will not be successful for anyone involved. That is not what we want.

The issue of border change in the Balkans is widely discussed on the occasion of Belgrade-Pristina deliberations, while the US seems to accept a conditional exchange of territory. What is the French position? Is there a risk that tempests will be unleashed in other parts of Europe?

We hope that Serbia and Kosovo will soon come to an overall and final agreement, in line with the desire expressed by the two Presidents, whose efforts we are supporting. It is up to the two sides to determine the content of the agreement. No choice should be excluded in advance in order to achieve a comprehensive and final solution to this dispute, provided that the envisaged agreement leads to strengthening the stability of the region.

A year after the ambitious vision for Europe outlined by French President Emmanuel Makron in Pnyx and Sorbonne, the reform of the Union is still hampered by the inertia of important partners. What to expect in the near future?

This appeal has had a very significant impact on the European Union, both in terms of public opinion and on other heads of state, government and institutions. Since then, we have made tangible progress, particularly in the areas of ​​security and defense, social rights or even trade policy, elements of 'Europe that protects', as France wants. Of course, challenges remain: nationalisms have recovered and ruptures have increased, especially with regard to the immigration issue. We must therefore double our efforts on the basis of a dialogue with all Member States and with the involvement of European citizens in the debate on the future of the Union, through citizen consultations. However, if no common ground can be found, we must accept the idea of ​​a multi-tier Europe that already exists in practice: it allows the more ambitious states to move forward, while allowing the rest to meet it later in due course. It is a definition of Europe at the same time ambitious and realistic

Your German counterpart, Haiko Maas, argued against unilateral actions of the Trump administration and that the EU has to create its own independent payment system, autonomous defense and multilateral alliances to act as a counterweight to the US. How do you see these suggestions?

US policy really strengthens our conviction that we must continue to move towards the confirmation of a more sovereign and more autonomous Europe. Europe must fulfill its role on the international stage, defend its interests and values, and in particular its attachment to a multilateral system, because through this framework we have managed to achieve very significant and tangible results in recent years such as the agreement on the Iranian nuclear program or the Paris climate deal.

Recently, the proposal for a four-party conference between France, Germany, Russia and Turkey on Syria was formulated. Would you attend such a conference? Does Paris still believe that the removal of President Assad is a condition for a political solution?

France was the first to propose the alignment of positions between Western and Arab states from one and the three so-called guarantor countries in Astana on the other, to achieve a fair and credible political solution. As for Bashar al-Assad, the French President recalled that our enemy number one is Daesh and never made the removal of Bashar al-Assad a prerequisite for our diplomatic or humanitarian action. Keeping Assad in power would, however, be a fatal mistake, because he is primarily responsible for millions of refugees, massacres and the rise of terrorist groups in Syria. Neither France nor any other country has a role to designate the future leaders of Syria. But it is our duty and interest to ensure that the Syrian people will be able to do so through free and transparent elections that will enable all Syrians, including those who have escaped from the regime, to choose their own leader.