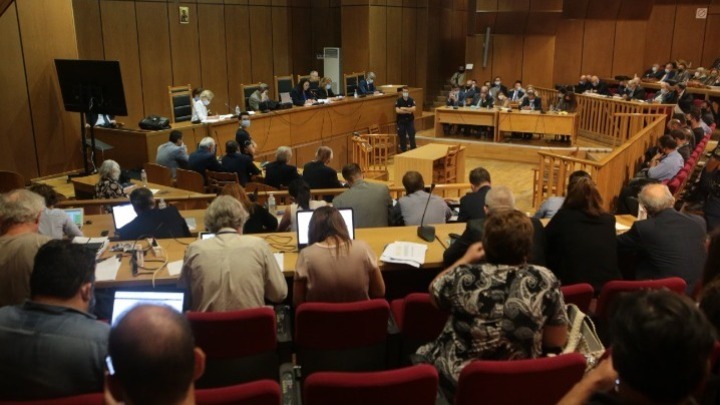 The criminal inquiry into the party began after the fatal stabbing of Pavlos Fyssas, a rapper known for his anti-fascist activity, in 2013. According to the verdict, Giorgos Roupakias, an active Golden Dawn supporter who had delivered the fatal wound, was found guilty of intentional homicide and faces life in prison; fifteen more people were convicted of conspiracy in the case, and also of joining a criminal group.

Five more Golden Dawn supporters were found guilty of attempted homicide, in an attack against Egyptian fishermen that took place in 2012, and of participation in a criminal organization; four were charged with causing bodily harm over assaults on members of Greece’s Communist Party trade union in 2013.

A strong police presence was in place as large crowds had gathered outside the court as the judges gave verdicts on 68 defendants. Representatives of parties across the political spectrum, from the governing New Democracy party to Greece's Communist Party and the former governing SYRIZA party, were outside the courthouse.

All the political parties in Greece hailed the court rulings as a victory for democracy and human rights. Thanassis Kambagiannis, a lawyer from the prosecution team, described the trial as "the largest court hearing of Nazis since Nuremberg."

"Today is an important day for democracy", the president of the Hellenic Republic Katerina Sakellaropoulou said. "Today’s decision is a confirmation of the fact that democracy and its institutions are always capable of fending off any attempt to undermine them."

"Democracy has won today. It is up to all of us for it to win every day," Prime Minister Kyriakos Mitsotakis said in a statement on the court verdict adding that he would normally refrain from commenting on court rulings, but as a Greek citizen he participates "in the universal satisfaction for the recognition of [Golden Dawn’s] criminal nature".

The SYRIZA party also welcomed the verdict; in a statement outside the courthouse, its leader Alexis Tsipras said that "It is a great day for our democracy, a day of vindication and pride".

KINAL leader Fofi Gennimata said the decision sent a strong message to Europe that there "is no room for fascism in our lives". The Communist Party’s leader Dimitris Koutsoumbas also praised the court for reaching a verdict "guided by the truth, as this was shown by a host of evidence".