Décadence Club: The Athens Dadaist Scandal Is Back | Interview with Nikos Lakopoulos

Our sister publication GrèceHebdo interviewed* Nikos Lakopoulos on the relationship between Décadence Club and Surrealism, André Breton, Arthur Rimbaud and Dada and on the rebirth of this singular place for Athenians.

In the late seventies, the villa of the former Viceroy and officer of the military junta, George Zoitakis, became a mythical place of alternative Athenian scene, forever altering all the conventions of night clubs: the Décadence Club. But it was not until the early nineties, when Nikos Lakopoulos, journalist and writer, appropriated the place that Décadence progressively acquired its legendary status, becoming a unique corner in Athens, recalling the movements of surrealism and Dada: we discovered, among others, delirious theme nights (ranging from poetry to ... beach volleyball games) where there were also film sessions with a projector dating from 1916 (called Lola), and a hairdresser or even a vegetable seller. A self-proclaimed "independent state" bar that ran its own newspaper, the Décadence Times, the first free newspaper in Greece, and even had its own currency (DE) that allowed for the purchase of drinks on the spot. But above all, a 90's club where the biggest groups of the alternative scene in the 90s came to play almost incognito. The bar frequented by Leonard Cohen in the 80's became, a decade later, the local haunt of Nick Cave, Iggy Pop, Tindersticks, Walkabouts, Deus, Archive and others, and also the bar loved by Greek writers and poets, musicians, transvestites and moviegoers from Athens. The latter made screenings or sometimes shot their films there (Nikos Nikolaidis' film, Loser Takes All (“O hamenos ta pairnei ola”), was shot in the Décadence Club). Even Mikis Theodorakis spent a few nights there.

Nearly a decade after Décadence closed in 2009, Nikos Lakopoulos once again reclaimed the lease of this haunted house and aimed to resurrect the spirit of a place that fascinates even the youngest generations, even though they never experienced it.

Tell us, how would you introduce Décadence to someone who has never been to or ever lived in the 80s-90s in Athens? What made this place mythical in your opinion?

First, it should be noted that it is a building of 1934, which was indeed the house of an officer of the Junta of the Colonels (1967-1974), George Zoitakis, who will be tried and convicted for life imprisonment (later he received a lighter sentence ).

It's not even a neoclassical building or well preserved. But perhaps the atmosphere of this two-story house or its location in an alley, hidden behind Strefi Hill, near Exarcheia, all contributed to the birth of a somewhat hidden place. Décadence has become a kind of hiding place for artists, poets and the "underground" of Athens, a place frequented by very diverse people ranging from artists and punks to Athenian transvestites. One could find Leonard Cohen there, who spent his nights drinking dry martinis here before taking the boat to his home in Hydra, and Alexandros Yiotopoulos, one of the suspected leaders of the terrorist organization November 17.

For some reason, already frequented by poets and artists, Nick Cave had visited it four times from 1992 to 1994 and spent some twenty nights there before and after his concerts. Iggy Pop and his band were also among the regular customers, as a hundred other groups of the independent scene such as Tindersticks, Deus, Walkabouts, and Archive, who all fell in love with Décadence during their stays in Athens in the '90s. Legend has it that one of the Archive members married a barmaid of Décadence!

Personally, I visited it for the first time in 1979. A few years later I thought it would be a nice place to create a radio station, when my radio program “Radiosynnefoula” ended with ERT (Translator’s note: the Hellenic Broadcasting Corporation). Finally, this station never saw the light, so that's why I made “WC FM” - a radio station that could be heard in the toilet of Décadence. I do not know if it's a "mythical" place as you say, but there's certainly something special about Décadence.

Why the name "Décadence"?

The place was founded in 1978 by the painter Yiannis Philippou. As he himself told me, the name came to him while the building was being painting: he looked at the building and said to himself: "Décadence”! And that's how the club got its name. Afterwards, the bar was renamed "Dafnos bar" according to a loyal customer, Alexandros Dafnos. For a short time, it had the name "Jim’s Bar" until 1990, when the idea to me to call it "Girls’ School, sweet Décadence", but we disagreed with colleagues and so we have returned to the original name: Décadence.

Décadence recalls the Dada movement or the atmosphere of May '68: it was a place of unrestrained imagination and aesthetic subversion that was at the same time a cultural center, a beauty salon, a beach, a grocery store, a bar, a poetry house, and a cinema! All the initiatives were the fruit of collective work and there were well-known phrases such as "Do not sleep in battlements" or "Entertainment is not bought, it is created". Are there any references to certain artistic movements or political movements in this cultural proposal that were ultimately yours?

Obviously, there is a connection with France; first of all the name "Décadence" is French. Also it must be noted that there was a French style crêperie in the basement bar. Our slogan "Entertainment cannot be bought, it must be created" refers to the fact that the Athenian locals at that time saw customers as banknotes, while for us, this was an insult. The phrase "Do not sleep in the battlements" comes from the "Immaculate Conception" by André Breton and Paul Eluard and was also used in my book "The ABC of the Soldier", which became a bestseller at the time and contributed to financing Décadence.  Of course, there is a lot of Surrealism inDécadence and also references to places such as the Café Lautréamont, a small bar used by Surrealists in Paris that had been reproduced in Athens for a brief period in the '80s, or to the Cotton Club.There was another little-known bar that also marked me, Ypersyntelikos, on Akadimias Street in Athens. Yet these links exist in a fuzzy form, not a copy. The DE notes issued by the Décadence bank bear the symbol of Arthur Rimbaud's face, accompanied by the phrase "Innocence is back".

As for the walls above the bars, there was a poster of Albert Einstein and glasses by Edgar Alan Poe.So I would say that Décadence, with its deep dislike for false culture and all that was "cultural" but not true art, combined its own version of Dadaism with punk. But all this without labeling.

Why did Décadence proclaim itself an independent state by issuing its own banknotes and its own newspaper? Will this be repeated today? Perhaps Décadence will give the answer to the "Greek crisis"?

Ha, ha! The self-proclamation of Décadence as a chamber-state was made through its newspaper Décadence Times as a kind of protest against energy suppliers whose bills were unpaid. The title on the front page was: "OTE-DEI: Stay out of our territories!" (Translator’s note: OTE: Hellenic Telecommunications Organisation; DEI: Public Power Corporation) It was symbolism, like the slogan "Give retirement at the age of 20". It was then that I proposed to Tzimis Panoussis to become the leader of the political party "Décadence" and to participate in the elections, but he refused. I wanted to found a party that would organize events like parties, without political speeches, with music, clowns and jugglers. I also wanted to apply for recognition of our independence by the United Nations, but I did not find a lawyer to do that. You know, it's like saying, "When the wise man points to the moon, the idiot looks at his finger". In any case, during the last months, we have printed new Décadence tickets to help pay for the bar. The Libération journalist who paid tribute to us was impressed. "And what is the exchange rate of your currency against the euro? She asked. "A DE = 7 euros," I said. "We have a strong currency."

Today, is Décadence is only a club or does it aspire to become something else again? How can we avoid nostalgia and launch something original today? In other words, what does Déca propose in Athens in 2018? 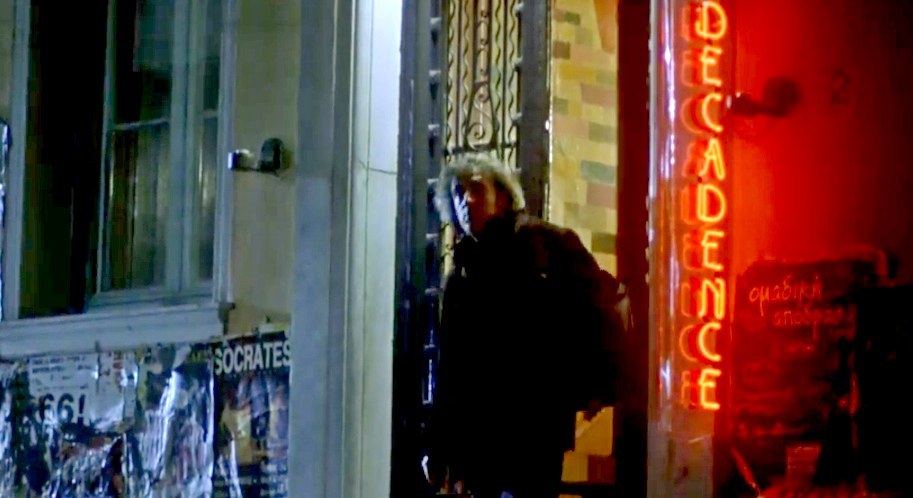