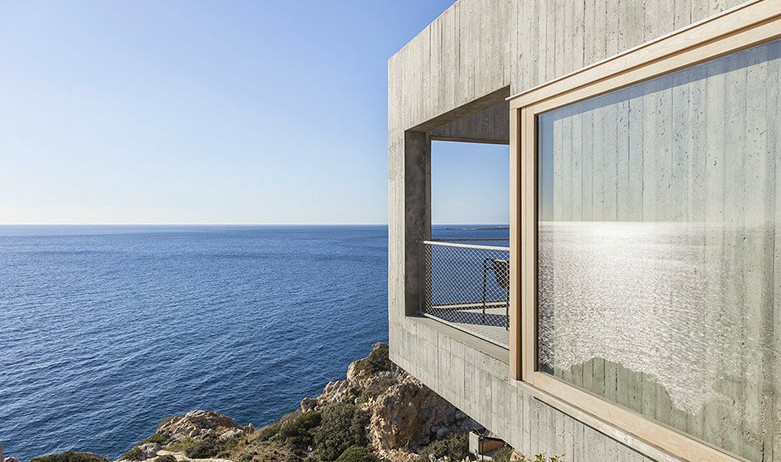 The “Patio House” residence is a striking building hanging off a cliff edge over the sea; it is situated on the island of Karpathos, the second largest of the Greek Dodecanese islands, in the southeastern Aegean Sea. The structure has caught the attention of specialists worldwide due to its unique way of merging with its jagged surroundings, overlooking the sea, and was even nominated at the World Architecture Festival Awards. The firm behind the audacious concept is OOAK architects, a Stockholm-based architecture studio run by Maria Papafigou, Johan Annerhed and Marie Kojzar.

Papafigou was born in Athens and studied architecture in Lund, Barcelona, Athens and Stockholm. In 2004, she founded together with Johan Annerhed the Athens-based architecture firm Paan Architects. Annerhed was born in Uppsala, Sweden, and had studied in Lund, Delft and Athens. One of the Paan Architects’ projects was nominated for the Mies van der Rohe Prize in 2013. That same year the duo founded OOAK in collaboration with Marie Kojzar, born in Stockholm, who studied in London and had previously worked with Alison Brooks Architects in award-winning housing projects and public buildings. 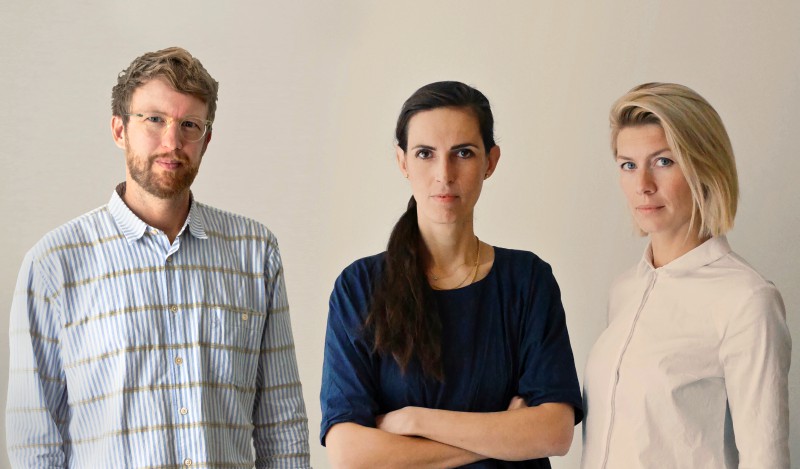 Maria Papafigou spoke* to Greek News Agenda about OOAK’s past and future projects, their influences from Greek and Nordic architecture, the distinctions they have received so far and the Greek “meraki”.

When I saw the cover of the Plaza Deco magazine (issue June ’18) I couldn’t help but stop and browse through the cover story, which was about a house in Karpathos. Each photo in the article captured the Aegean Sea in the background and I found out that those responsible for this architectural feat are the OOAK architects: you, your husband, Johan Annerhed, and Marie Kojzar. It was also stated that the house was commissioned by a couple who keep visiting Karpathos to enjoy their favorite water sport, surfing, because of the “meltemi” wind -also known as etesian- blowing on the island.

After having travelled to Greece for many years because of windsurfing, a Paris-based French-Swedish couple finally found their dream spot on the windy island of Karpathos. The search for the perfect site was tedious, but the minute they saw this amazing property they knew that they had found their place: a dramatic plot of land with open views of the Aegean Sea and direct views of the windsurfers on the beach of Afiarti. The owners dreamt of a sanctuary in this beautiful yet rough landscape; a place where they could fully experience the magnificent surroundings, a shelter from the strong winds of Karpathos.

How does the Aegean landscape affect the design as well as your aesthetic choices?

Our firm’s work is colored by the strong ties to the locus, both cultural and physical, and is strongly influenced by the Nordic respect for nature. For us every design derives from the particular characteristics of each site. More specifically, this project focused on the sparse, untamed and dramatic landscape which became the starting point for our design. Every manmade alteration would be visible in this unique lot with its jagged, textured cliffs that descend into the grand Aegean Sea. The main issue that needed to be tackled was the ways of introducing a foreign object -a house- into this spectacular landscape, while simultaneously enhancing its qualities without altering its character. Rather than trying to mimic the landscape, the house is gently placed on the site as an object, leaving the surrounding landscape as untouched as possible. Landscape and building are perceived as two distinct elements that together create a new entity – much in the way a perfect shell fuses with a rock over time and gradually becomes part of the rock formation itself. In other words, the result transformed into two contrasting objects, living in symbiosis, enhancing and complementing each other.

Have you undertaken projects in other islands?

Yes, in fact we have worked on various architectural design projects in Samos, Andros, Santorini, Antiparos and Rhodes.

Besides the Aegean islands, in what other landscapes or cities have you had the opportunity to work?

While conducting my research based on your name, I discovered multiple distinctions regarding your work in a number of architecture magazines. Would you like to elaborate?

OOAK architects is a Greek-Swedish firm founded on a new collaboration between Paan architects (Maria Papafigou and Johan Annerhed) and architect Marie Kojzar. Paan architects was an Athens based firm active for about 10 years. Johan and me, as part of Paan architects, realised and got acclaimed for many of our projects, including “Hill House”, a house in the outskirts of Dionisos that was nominated for the Mies van der Rohe Prize for 2013.

I have the pleasure of interviewing you in your workplace, in a small office in the city of Stockholm from where you depart towards many destinations across the world. Please tell us more on your international work travels.

We follow up the construction on all our projects and we travel frequently to the construction site. We share the travels between the three partners and we try to establish good collaborations on each site in order to secure the quality of the work.

As previously mentioned we aim to create unique projects with distinct identities. Characteristics such as strategic planning, physical and cultural context, climate and people are specific attributes that often translate into the driving forces for the design process. We enjoy redefining vernacular elements in to our design and of course we bare with us the traditions of our two native but distinct countries.

The Scandinavian architecture does differ compared to the Greek one. Would you say that in your work there is some sort of connection between them? Do both of them tend to reach a meeting point or even an overlap?

Our work is very much inspired by the Nordic respect for nature and all our projects around the world have the same respect to their surroundings. 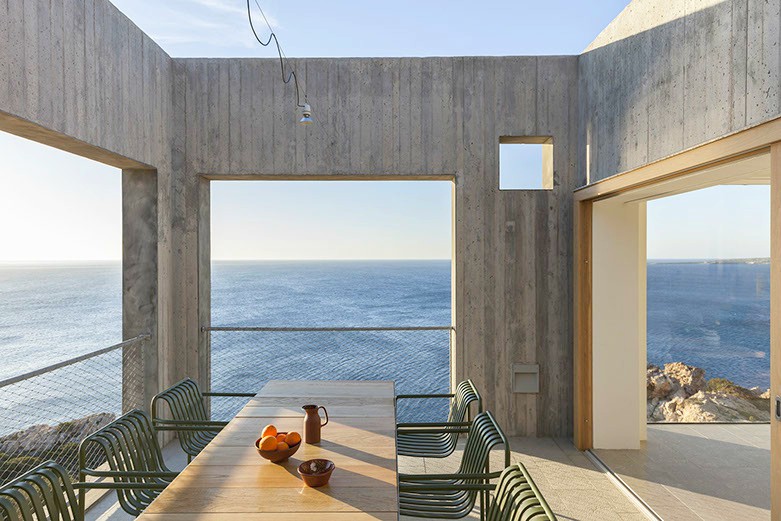 What has the Greek traditional architecture taught you? Especially, regarding the houses you are designing in the Aegean or the Greek countryside.

In Greece the most inspiring thing is the “meraki” of all the builders and workers. Meraki in this case can be roughly translated into the amount of labor and effort put into methods and techniques with many different materials. Many things are possible to realise in Greece that would be impossible or very expensive somewhere else and that is mostly thanks to the experienced craftsmen drawing strength from the ongoing mutual communication and understanding.

Would you consider Greeks as daring? Are they ready to embrace something unprecedented that does not fall under the traditional housing design? Do they accept your ideas and suggestions?

We consider Greeks visionaries embracing new ideas. We have never encountered concerns or difficulties while explaining to our clients the concept of a project and we always try to combine innovative thinking with environmentally friendly ideas.

What kind of relationships have you developed with the locals?

The attention that our projects require becomes a positive challenge for the builders and the construction crews. That makes them want to prove to us and themselves their distinct professional skills, feeling very proud of the result at the end.

What are the four short project-books you published in Highlights magazine and to whom are they addressed?

These are small booklets that we produce at the firm after the completion of each project. We always try to put together a booklet for our clients that explain our thoughts and the process that goes into them. 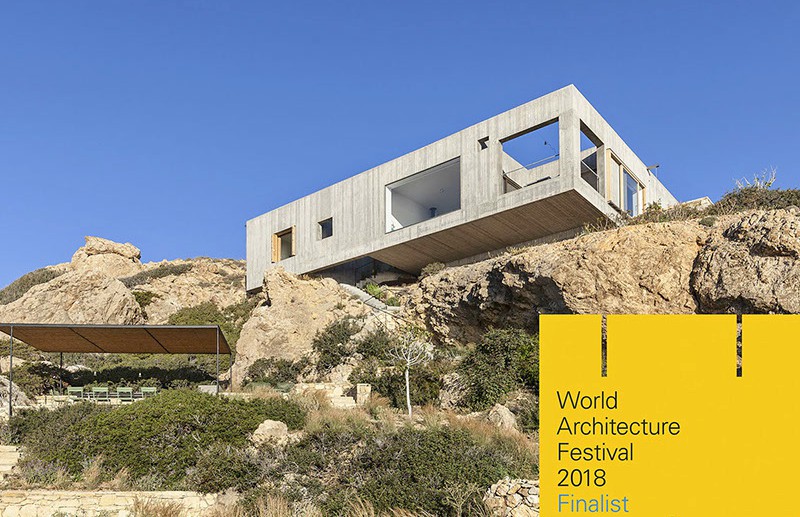 I read that you have been nominated in the “Villa of the year” category at the World Architecture Festival and that you are going to present your project in front of the jury at the end of November. First of all, congratulations! How do you feel about that?

We are indeed very happy that the project has been nominated in the World Architecture Festival and Awards. These international awards showcase the best examples of architecture worldwide in many different categories. In the 'villa of the year' category our project is the only one from Greece. We cannot express how proud we are for the opportunity to show the beautiful Greek settlement where the house is located as well as the Greek craftsmanship that has made the project possible.