Creative Greece | The Art of “Dancing” Through Dionisis Kavallieratos’ eyes

“Disoriented dance / Misled planet” by Dionisis Kavallieratos is the first-ever contemporary art exhibition to be staged at the emblematic Odeon of Herodes Atticus in Athens. Curated by art historian Polina Kosmadaki (Benaki Museum), the exhibition will be running through July 3, 2020, as part of NEON City Project 2020 in collaboration with the Athens & Epidaurus Festival. 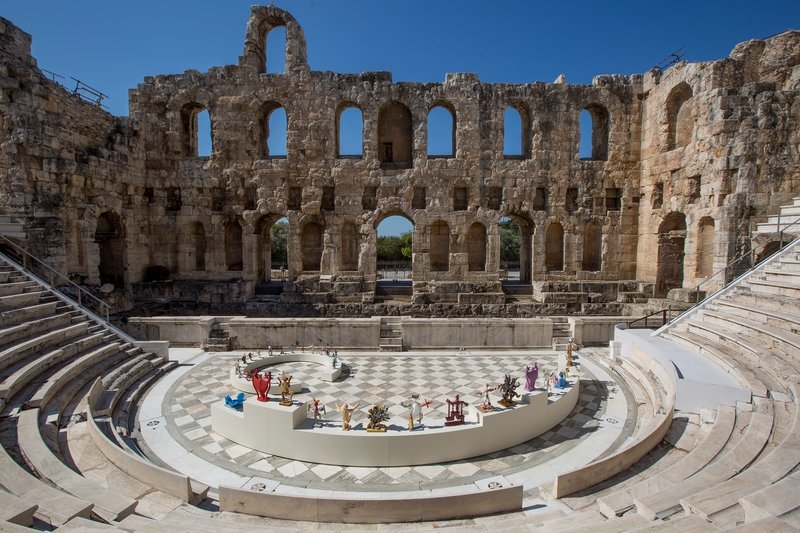 The show is a “sculptural performance” that aims to create a dialogue between contemporary Greek visual art and the historic site of Herodion theatre, which is situated below the Acropolis. Dancing by Dionisis Kavallieratos is directly connected to the types, rituals, and kinesiology of Ancient Greek drama. More specifically, it is an in-situ installation of a circular dance of about 40 sculptures made of various materials (copper, clay, resin, wood, mirrors, etc.) with a series of references to prehistory and antiquity, as well as modern art, dance, mass culture, folk art and more. Thus, the public comes across various elements (the Sphinx, Cycladic figurines, animals, fruits and everyday objects) that represent and reinvent characters from the western world such as the vagabond, the slave, the homeless and the drunkard, while in other cases, the autobiographical references are obvious.

Kavallieratos approaches the medium itself with both a sense of humor and a critical attitude. Using sculptural techniques (molding, soldering, casting, carving), he ends up creating paradoxical and bizarre figures of a disoriented dance, describing a harsh and disrupted world of amusing conventions, theatrical absurdity, and indifference infused with doses of irony, sarcasm, and self-reflection. Starting with the religious, physical, and socio-political connotations of the circular dance – a ritual but also a motif that is already encountered in prehistoric times – Kavallieriatos comments on the importance of community, companionship, friendship, laughter, gestures, and physical expression.

“I used Dancing as a metaphor, a vehicle to talk about the human race -route of history in general. These dancers I made, seem like they all come from a different universe, they all say a different story, like each and every person in this world of ours, is different, indifferent, same, equal, unequal. They all dance together in a circle but they all want to go in different directions. What a shame but how interesting...” says Kavallieratos to Greek News Agenda*. 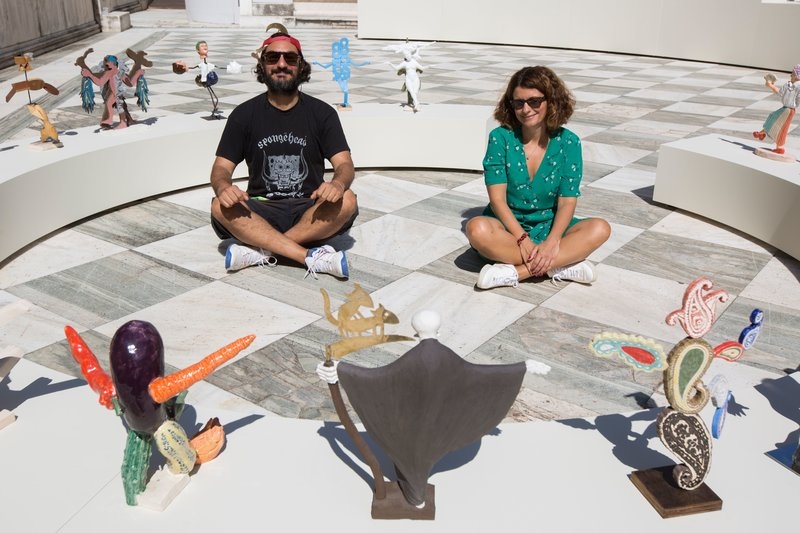 In parallel, the artist presents 29 large scale drawings that approach the theme of dance in the ancient theater, under a different perspective, at Bernier/Eliades gallery. The show, which is titled “Chorus” will be running through July 18, 2020. As curator Polina Kosmadaki points out, Kavallieratos “converses with the tradition of classical tragedy and comedy and designs a body of anthropomorphic characters that dance, referring to the narrative and catalytic function of dance in the ancient theater. At the same time, the artist usurps iconographic and morphological elements from popular tradition of the 20th-century history, literature, and nature, in order to invite us and challenge us to reflect on contemporary social, political and human issues, always through parody and self-sarcasm”.

Dionisis Kavellieratos was born in Athens in 1979; he graduated from the Athens School of Fine Arts in 2002 and completed the Radar Project (residency) in Venice and Krakow (2003-2004). He currently lives and works in Berlin; when asked whether he thinks “Athens is the new Berlin" (as stated in some international media reports) taking into consideration the city's upgraded status as a modern art capital, Kavallieratos tells Greek News Agenda:

“Berlin was and is a new Berlin. Athens was and is a new Athens, I don't believe and I don't agree with such media statements and practices. Naming the next hype city is an art fashion that lasts shortly, a bubble that blows away quickly. What proceeds silly artists moving places these days are real people in urgent need for shelter. The planet is a ball that rolls, it belongs to everybody and nobody”.

Kavallieratos’ flexible artistic practice includes small and large-scale sculptures in wood, clay, or mixed media and drawings in pencil and charcoal. His work reveals a dazzling inner world -a personal universe through a humorous and ironic style. Recent exhibitions include: The Same River Twice: Contemporary Art in Athens, a collaboration between Deste Foundation, New Museum and Benaki Museum, Benaki Museum, Athens (2019) Hypnos Project, Onassis Cultural Centre, Athens (2016), This which all want, none shall ever have, Bernier/Eliades, 02 Athens (2016), TERRAPOLIS, NEON Organization, curated by Iwona Blazwick (2015), No Country for Young Men, Bozar, Brussels (2014), The Mediterranean Experience, Macedonian Museum of Modern Art, Thessaloniki (2013), Faces, Onassis Cultural Centre Athens (2012), The son of the eagle breaks his legs. The son of the eagle walks on his hands, Bernier/Eliades, Athens (2012).

As for his future business plans, Kavallieratos is joking about becoming a happy millionaire, stating however that -in reality- he never makes plans:

“Things develop always in a way, good or bad; I accept them as they come. I've been lucky. Luck will run out someday, I hope not soon”.

Read also the full program of the Athens & Epidaurus Festival 2020