"The Kiss" (2019), a deeply anthropocentric work -created by the internationally recognized Greek artist, Ilias Papailiakis- was recently transformed into a 22 meters high mural to emphasize the value of human contact, especially in times of isolation, such as the one we are currently going through due to the covid-19 pandemic. The artwork – which adorns the wall of an apartment building in the heart of Metaxourgio area -is the first of a large-scale works series curated by Christopher Marinos, Art historian at the City of Athens Culture Department. More specifically, it is part of the “OnAthens” project, commissioned and produced by the Onassis Foundation in collaboration with the Organization of Culture, Sports and Youth of the Municipality of Athens (OPANDA).

“The work expresses a certain and unique moment between two people. love, desire, tenderness, proximity, and awareness of the other are some of the issues echoed in these few lines. Showcasing the work in the public realm aims at encouraging the dialogue in a city meant for meeting and being with each other. An emotional city” says Ilias Papailiakis. 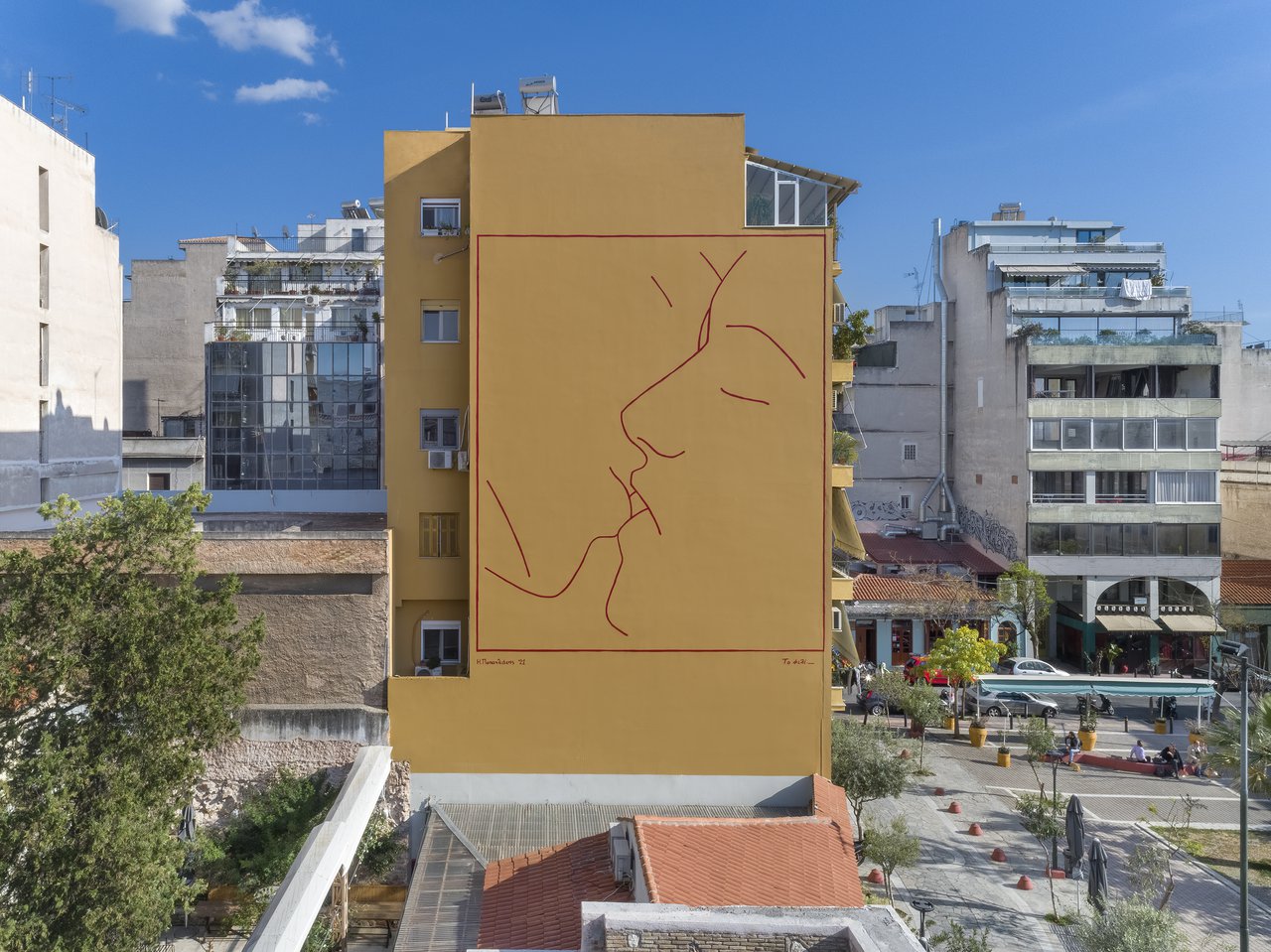 Thus, “The Kiss” is making a new entry into the fascinating world of the country’s street art scene, which is one of the most vibrant in the world! In fact, the graffiti movement has always existed in Greece: the word “graffiti” itself comes from the Greek word “graphi”, meaning ‘to write’, with inscriptions and messages being carved and embedded into buildings for centuries as an ancient art of communication.

Even though the word “graffiti” once had a negative connotation, more and more cities opened up to the idea of urban art over the last decades, by adopting street art as an open form of expression which reflects social and political concerns in a changing world, while adding uniqueness to their region.  Just like the renowned street artist from Greece, INO, once said in a New York Times interview, “If you want to learn about a city, look at its walls.” 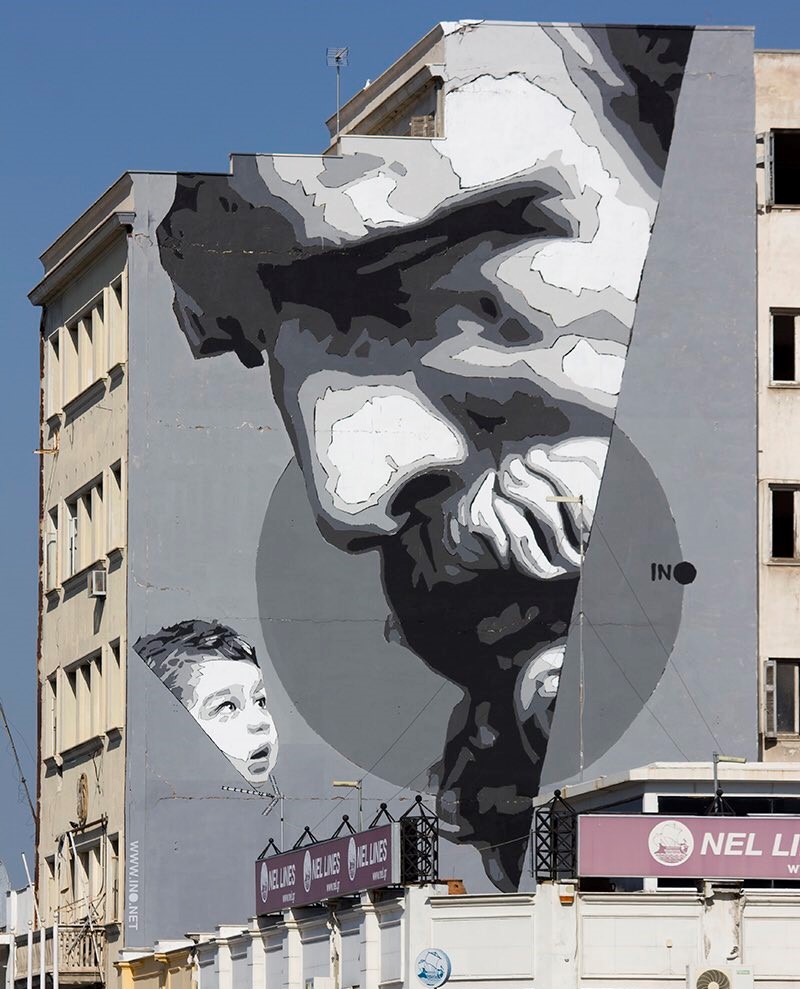 Greece is also enjoying a new burst of creative energy in recent years, becoming home to local and international street artists alike. Athens, in particular, is considered to be “a contemporary mecca for street art in Europe”! Yet, there’s something about Athens that casts its street art in a different light than that of London or New York. It’s the inescapable presence of antiquity: only in Athens do you have the juxtaposition of a very ancient urban aesthetic – the Parthenon and Acropolis and the Panathenaic Stadium all loom large, not just in the physical space of the city but in the collective conception of what defines Athens as a great city – with outdoor artworks telegraphing messages and colors you’ll never find on a Doric column.

Unlike other cities, street art in the Greek capital is quite common to be found downtown, especially in the neighborhoods of Exarchia, Psyrri, Anafiotika, Gazi, and Metaxourgio, where walls are being transformed into works of art by talented creators with an edge, some of whom (Pavlos Tsakonas and SimpleG for instance) have studied in the Athens School of Fine Arts.

Special mention should be made to the UrbanAct organization, which has been collaborating since 1998, with public and private institutions from Greece and abroad -including Ministries and Municipalities- with the aim to promote the art and the public mural techniques (street art, etc.), by intervening mainly at public spaces. In fact, UrbanAct is behind many of the more substantive pieces, such as the “School Buildings Murals”, the “Colors in Hospitals” projects, the Socrates' shelter for the stray animals of Athens Municipality, as well as the "Fisixe Vardaris" mural art project in Thessaloniki which pays tribute to one of the most important and once numerous communities of Greece’s second-largest city, namely the Jewish community.

Last but not least, festivals like the Athens Street Art Festival and Petit Paris have also contributed to the country’s mural scene, while various other interesting projects are underway, such as “The Street Art Project” which is conducted under the auspices of Greece’s Crime Study Centre (CSC), with the aim to carry out scientific, research and educational work related to artistic interventions in public space. 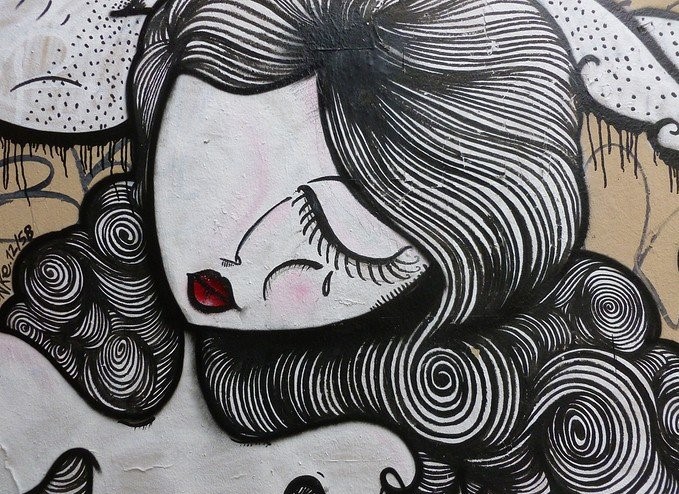