Filming Greece | Film Director Marsa Makris: “In the end, it is the enigma that feeds the imagination” 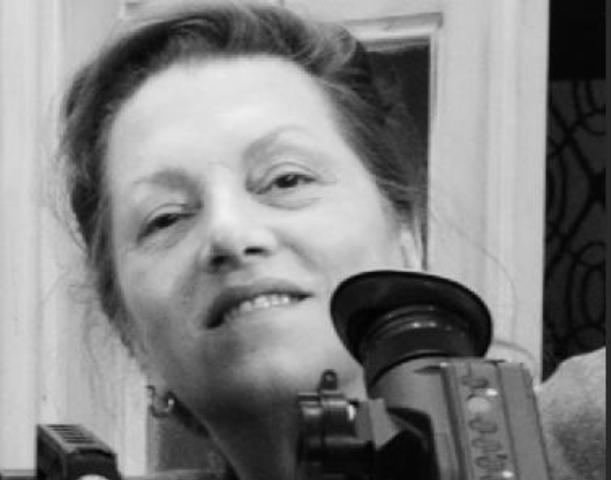 Marsa Makris has studied theatre directing and acting at the Stella Adler Conservatory, in New York. She subsequently pursued filmmaking studies at the University of California Los Angeles.

Her filmography includes short fiction films “A minor parallax” (1986), which won the second prize at the Drama short film festival, “Against the wall” (2003), which won best prize for original soundtrack at the Drama short film festival, and “Dry cleaning” (2005). Makris is mostly known for her short fiction, "To Tameno"/ “Offered boy” (2002), about a young monk discovering the real world, which was officially selected for the 56th Cannes film festival-2003, as well as at the International film festivals of Ismailia, Tehran, Alpe Adria Cinemay, Bilbao, Fajr, while it was also the Greek Film Centre’s entry for the European Academy Awards-Felix. 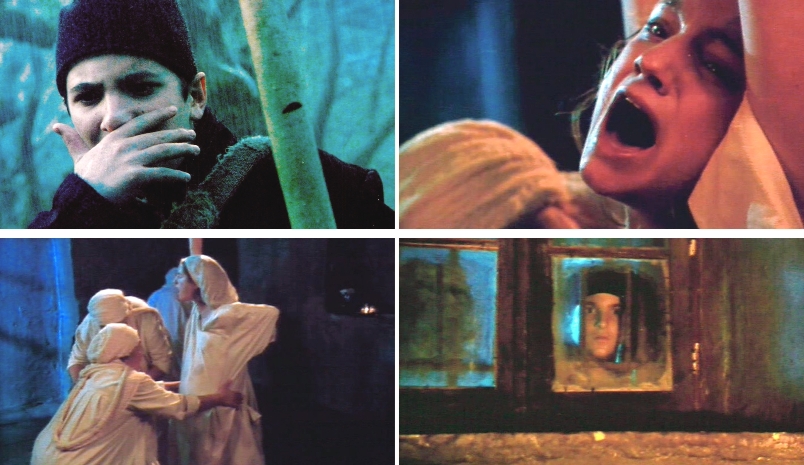 Her first feature film, “Ierosyloi” (Sacrilege), co-produced by the Greek Film Centre & ERT (Greek National Broadcaster), has just been completed. In "Ierosyloi"/ “Sacrilege”, the two protagonists, a beautiful woman (played by Loukia Michalopoulou) and a sick bed-ridden man (played by musician and performer Blaine Reininger), share their common life, caged in a large and decaying labyrinthine penthouse, cut off from a crazy and threatening surrounding world that they spy upon through the window's grilles and slots. Together they fall into a world between fantasy, history and reality. Fear, anger, illusion, ridiculousness and wonder interchange constantly in a frantic psychological twist of obsessive faith and the need of salvation. They are “The Beauty and the Beast”, but with the absence of Love. The third protagonist is a Byzantine icon of St-George, which was stolen by the male protagonist and hidden in a secret spot inside the apartment.

Interviewed by Greek News Agenda* Makris describes the difficult journey of filming "Ierosyloi"/ “Sacrilege”. She notes that confined characters provide both the filmmaker and the viewer with a variety of opportunities to explore all kinds of extremities and aspects of human existence. Asked how she works with the banality of objects and banality in general, she underlines that the placement of banality in a wider context helps one to contemplate the priorities and necessities in life. Makris also stresses that a cardinal point in her work is the sense of ambivalence, both in life and art, because “in the end, it is the question, the enigma that feeds imagination”. 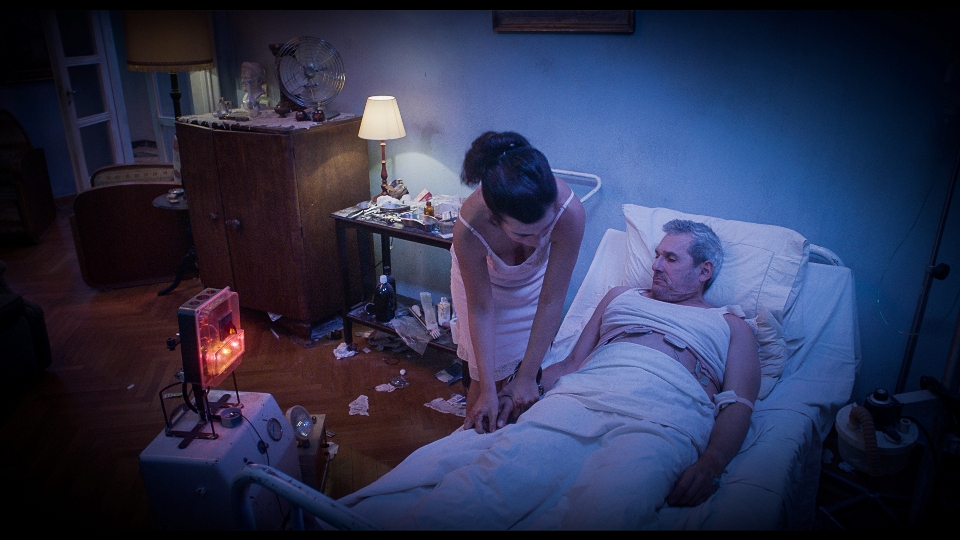 Self confinement and its repercussions on the state of mind is a recurring theme in cinema. How does it function in your film?

I guess the attraction to the confined-cornered, as I prefer to see them, characters, provides both the filmmaker and the viewer with a variety of opportunities to explore all kinds of extremities. It may have to do with the exploration of those underlying aspects of human existence that have always been present throughout time, aspects which we prefer to regard as primitive in our anxiety to disassociate ourselves from them.

Fear, obsession, oppression, fixation, delusion and a perpetual search for love, justice, catharsis and liberation are the recurrent themes in the crossings from darkness to light and vice versa, where we have to dig in, if we want to make any sense of it all. In the case of "Ierosyloi"/ “Sacrilege”, it is the paranoiac nature of all characters involved in the narrative, through their relation to faith, history, love, family ties and even public space that are in a sense left deserted in the empty shell of a life, full of objects and symbols that try desperately to articulate a coherent story. Pairs and opposites, at the same time eating their guts.

The apartment, the universe of the characters is a jumble of banal and rococo artefacts in a way that becomes familiar to the viewer. How do you work on banality?

There is only one way, Comedy... Self sarcasm also helps. There is a representation of quite some bits and pieces of our Greek history, arrangements of contemporary urban abandonment, as well as 'cute' female elements creating an interesting chaos in the film setting. I believe that the placement of banalities into a larger context creates a canvas worth experiencing. In any way, I think it makes you wonder about the necessities and priorities in life. 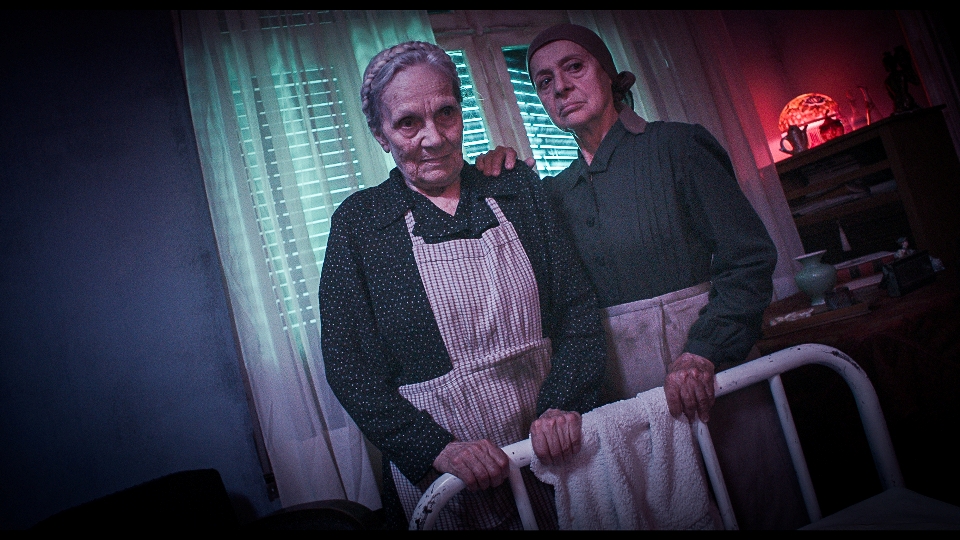 What is the influence of the Byzantine iconography in your films? How does the intertextuality of visual arts manifest in "Ierosyloi"/ “Sacrilege”?

For better or worse, Byzantine imagery is a big part of who I am. Besides aesthetics, this influence also affects the way I “sketch” my characters: as almost two dimensional characters, without the emotional burden (or mess) of contemporary western narration. I try to avoid manipulating viewer feelings and I find this a very Greek way to go.

In my short film “To tameno" / "Offered boy”, I believe that we have also achieved a deep relevance to iconography. However, in this film I tried to incorporate a sense of Mediterranean rococo-baroque and a vivid palette of electric colours in the imagery, that I think work well in underlining the delirium of the main female character and the constant fluctuation from dream and time confusion to a so-called reality. Even though part of the plot is the "rescue" of an icon of St George, it is to the very end of the film that clearer Byzantine aesthetic elements emerge again. 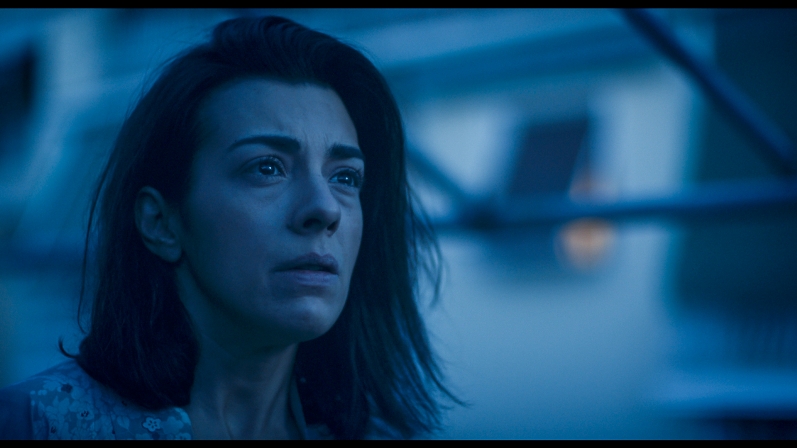 As in Offered Boy, religion, ranging from faith to fixation and delusion, is a central element of the plot. Would you like to elaborate?

There is a great paradox in our relation with God. Our nature contradicts the basic principle of faith and the teachings of organized religions, loving and respecting God’s greatest manifestation, Life. I find it fascinating to plunge into the muddy waters of ambivalence. We are complicated beings and as far as telling a story about it, the challenge for me is to arrange parts of this sort of inherent madness, as an allegory, a metaphor, whatever...

Let's say it is the big framework, where the drama of my characters is not the sacrilege against a religious artifact or ceremonial purity, but rather our crippling inability to selfless love and offering to each other. It's never boring; it may be right, it may be wrong. In the end, it is the question, the enigma that feeds the imagination. 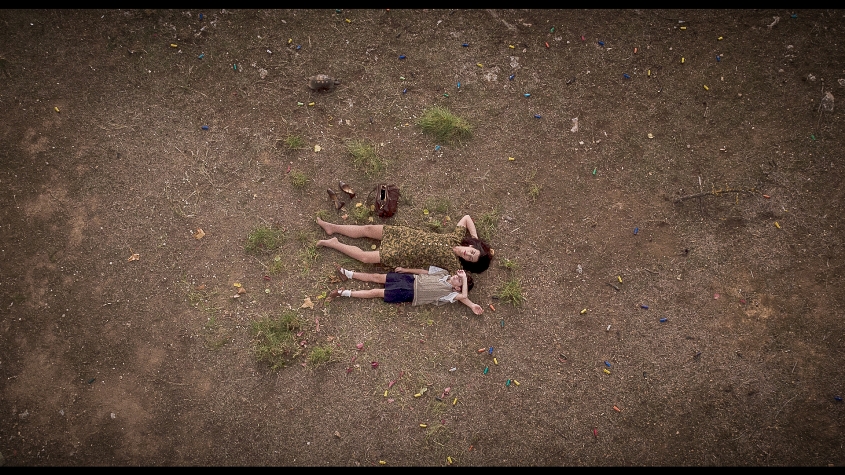 Your film was supported by the Greek Film Centre and the National TV Broadcaster ERT. Based on your experience, what was the effect of the economic crisis on Greek Film production?

I am thankful for their support. However, we have actually received the minimum possible. I am reluctant to say how much that was. There was also the time when the National broadcaster was shut down by our benevolent leaders of the time.

The initial approval from the Greek film Centre, which is the one major pillar of financial support for cinema in Greece, was announced while the second pillar (ERT) operated in a zombie like state. Then we had to wait again... It was an unforgettable nightmare. Of course that changed in the summer of 2016, when ERT once more provided invaluable and necessary support to many productions including ours, allowing us to move on. 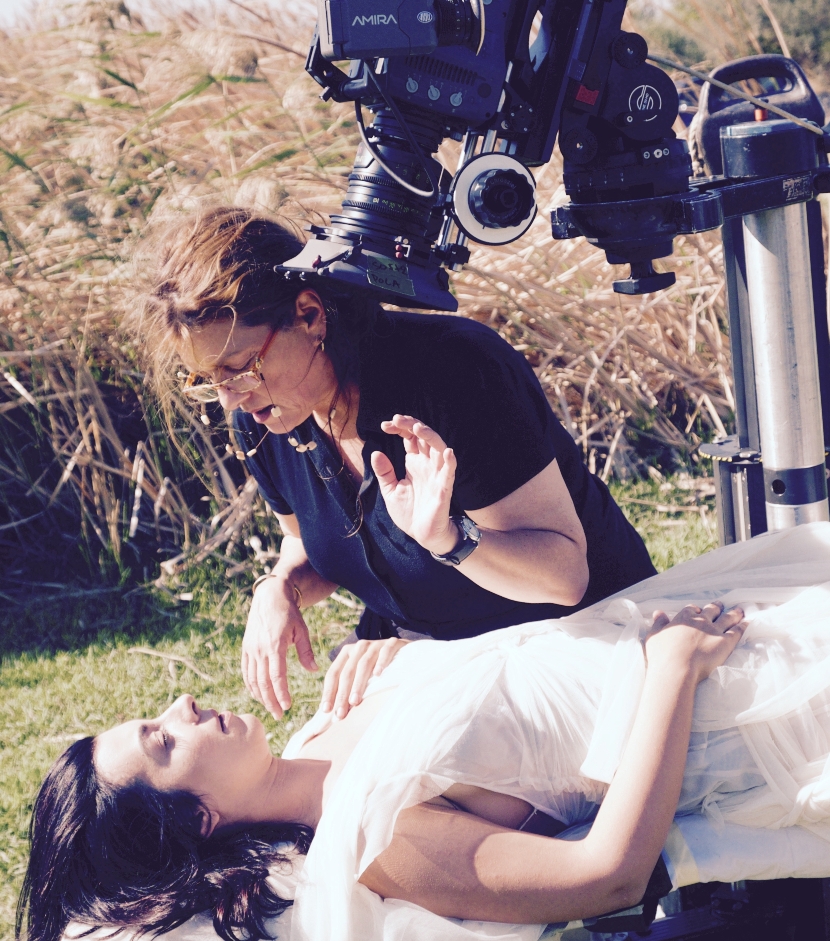 Loukia Michalopoulou and Marsa Makris on the set of "Ierosyloi"/ "Sacrilege"

Apart from the aforementioned support from the Greek Film Centre and ERT, it was through the miraculous and crucial gesture that was offered by three major companies from abroad that provided us with top of the line equipment, which was necessary to maintain an aesthetic standard. However, all that would not have been enough if it wasn't for the extra support provided by some younger friends in the filmmaking industry of Greece and without of course the collaboration of other artists that added their personal creative forces for the realization of my personal vision. Anyway, the truth of the matter is that Greek Film production is a painful story and was long before the recent crisis of the country.

SACRILEGE trailer from Authorwave on Vimeo.