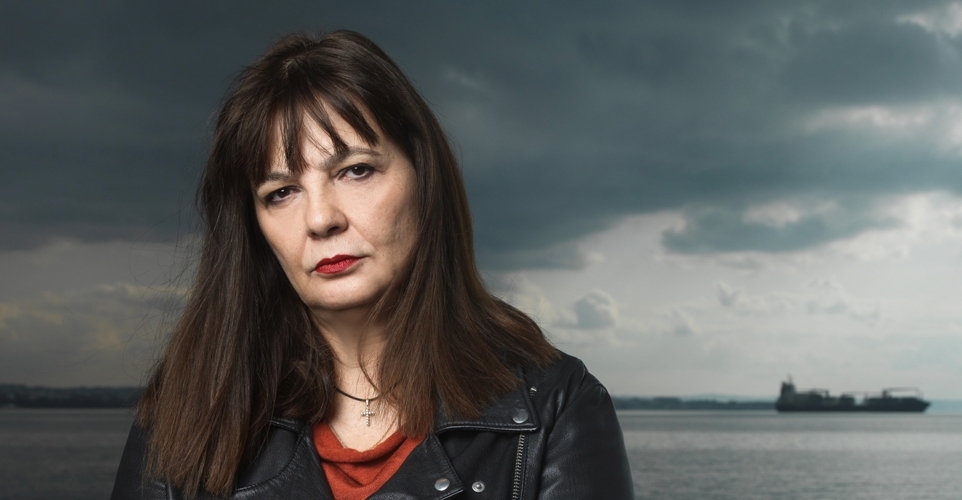 Dora Masklavanou is a film editor, director and actress, known for Coming as a friend (2005), and Sweet banch (1983). Her filmography includes nine documentaries and three feature films, the latest of which is Polyxeni (2017), which was awarded Best Feature Film Youth Jury Award at the 58th Thessaloniki International Film Festival.

“Polyxeni” is a period drama about a twelve-year-old orphan Greek girl separated from her younger brother in 1955, when a prominent Greek Istanbulite couple adopts her. She embarks on a new life and a future that looks bright. She receives an education, comes of age and falls in love, unsuspecting of the plot against her, targeting her hefty inheritance.

Dora Masklavanou talks to Greek News Agenda* about her central character, an interesting female persona, and explains why it is difficult for Polyxeni to escape her destiny, given her social position and the way she was brought up. She observes that it is part of the female condition, even in contemporary society, that women's self reliance is impeded and undermined. With the quest for love, trust and acceptance being the focal point in the film, Masklavanou explains that through her films, she is trying to give voice to the loners, the losers and the outcasts trying to find their position in this world.

Polyxeni is decisive enough to defy her preordained life but she cannot escape other entrapments, despite her education. How would you describe this interesting combination of strength and weaknesses in your protagonist and how do you feel about women’s position in contemporary society?

Polyxeni was adopted at 12 and under certain conditions. She had to prove every day with her hard work, obedience and silence, that she was worthy of the parents’ choice. But at the age of 12, memories, love, traumas and desires are very much alive and active. She may not be allowed to talk about the things she left behind, but she thinks about them and misses them and nurtures them inside her soul. She may have been offered education, but not the actual weapons with which to defend herself, and that is why she reacts impulsively. Let’s not forget that the time setting is the 70’s, a difficult and precarious period for the Greek community of Istanbul.

Polyxeni was chosen by her well established parents for many reasons of their own. As they are rich, childless and middle-aged, they consider the benefits in a process from which Polyxeni is absent. The adoption, which is a benevolent decision in itself and a golden promise, ends up as a poisoned gift from a couple of noble, trusted people. It is a combination that didn’t work, in a Greek community that used to be enviable, but in the 70’s it is hunted, wounded, and insular. Polyxeni is raised as something between a daughter, a foster child and a maid. She always had to be obedient and grateful, and that is why she explodes when she feels she’s in danger. Polyxeni reacts emotionally, not rationally. She is the kind of person that doesn’t accept social pretexts; she only understands clear and pure feelings, unaffected by social conventions.

As far as women’s position in society is concerned, I have to underline that if Polyxeni were a boy, everything would be different. That is why it is regrettable that we are raising this issue even today. Women's position and self-reliance in most parts of the world will always be questioned, judged and impeded.

Your film is based on a true story. What were the elements that moved you and made you decide to turn that into a film, given the challenges of filming a period drama in Istanbul?

The core of the film is a true story. An orphan girl is transported from Greece to Constantinople at the age of 12. She is forced to part from her brother and to forget him. But how can a young girl bear such a burden? It is a personal tragedy, a bitter life by definition. I am interested in wounded people who have no means to go after their desires because they are alone in a strange environment, territory or situation, but they keep struggling with what they have and come crashing against a wall. That's why Polyxeni has become an important figure for me. Without being a fatalist, she is a tragic woman that can’t escape her fate. For me Polyxeni is an admirable true heroine who will spend her short life being faithful to what she loved. We tried to bring to life this powerful story with Katia Gulioni, the actress who carried the film on her shoulders as Polyxeni, with Claudio Bolivar, director of photography, our stage designer Giorgos Georgiou, our costume designer Despina Himona, our make-up artist Yannis Pamoukis and the rest of our collaborators. We wanted to find the atmosphere, the tones and the pulse of the film. We wanted to discover Polyxeni and get carried away.

“Polyxeni” deals with issues of otherness and alienation as well as the difficulty of integration. Has the migration crisis that Greece is facing influenced you in a way?

The migration crisis in Greece touches our soul and affects our everyday life. It is not an issue that came from nowhere. At the same time, thousands of Greeks today look for a way out of their own country. It may seem surprising to us that we are currently experiencing it, but it has been there always: Feeling unwanted, inferior, a despised stranger and struggling to find a place in the world is deeply ingrained in our memory and in our blood. But human nature is both warm and brutal: it both nourishes love and revenge; thus it has been and always will be. It is our life cycle.

Lack of trust is a focal point in “Polyxeni”. Why is trust always so difficult to find?

“Polyxeni” is a film about trust. This is the most precious feeling in life, and the older I get the more I realise it. In trust, there is everything: love, faith, jealousy ... All intense human feelings are mixed, competitive; they can bring either joy or pain to people. Trust is an absolute and healing feeling. This is why it is rare; and it can come from unimaginable places. You offer it to someone because you love him or her unconditionally. Polyxeni comes close to Kerem because she is looking for trust, and he responds unconditionally: like stray dogs, they instinctively recognize each other, their common needs, their common wounds, and move along together.

You are also a singer and you have incorporated in the story the Rosarte children choir. Could you elaborate on the role of music in your film?

When planning the film began, I often imagined “Polyxeni” as the leading character in an opera. Her temperament and situation in life produced within me intensely dramatic material that was drenched in music. In the film, of course, we used what we thought was necessary with composer Nikos Kypourgos: melodies that would fit the simplicity, childishness, loneliness and memories of Polyxeni Luckily for us, the Rosarte choir came to enrich the film, they carried on their shoulders the end of the story lifting it off to a higher ground.

I want to make one more film for a person who has screwed up and tries to find his place in life. For the person who is ignored, the loner, the loser. I want to offer this person the right to life in any way I can. And then I want to do another film, and then another one ... I do not consider making films as self-evident or natural. It's a tough decision every time, it's just necessary for me and for anyone who wants to make films. You have to convince your friends and colleagues to work with you on a film. Even if you are the initiator of an idea there is no work that is more collective than cinema. You need the faith and contribution of all the participants, and, above all, its living matter: the actors, which for me is the film’s dearest element.

** The film was projected in the 58th Thessaloniki International Film Festival and was available in the international film viewing professional platform Festival Scope, a TIFF initiative for the promotion of Greek cinema abroad.