For the second consecutive year Asifa Hellas - Hellenic Animation Association will participate in the Festival, with 16 projects which include 4 feature and 4 short films with the support of the General Secretariat for Media and Communication (GSMC) of the Ministry of Digital Policy, Telecommunications and Media. GSMC is actively committed to the development of Greek audiovisual production, with a focus on animation and video games and it has undertaken a series of initiatives for the promotion of Greek Video Games and Animation community, including the new legal framework for the development of the country's audiovisual sector (L. 4487/ voted by the Greek Parliament in August 2017) and the establishment of the National Center for Audiovisual Media & Communication (EKOME S.A.). 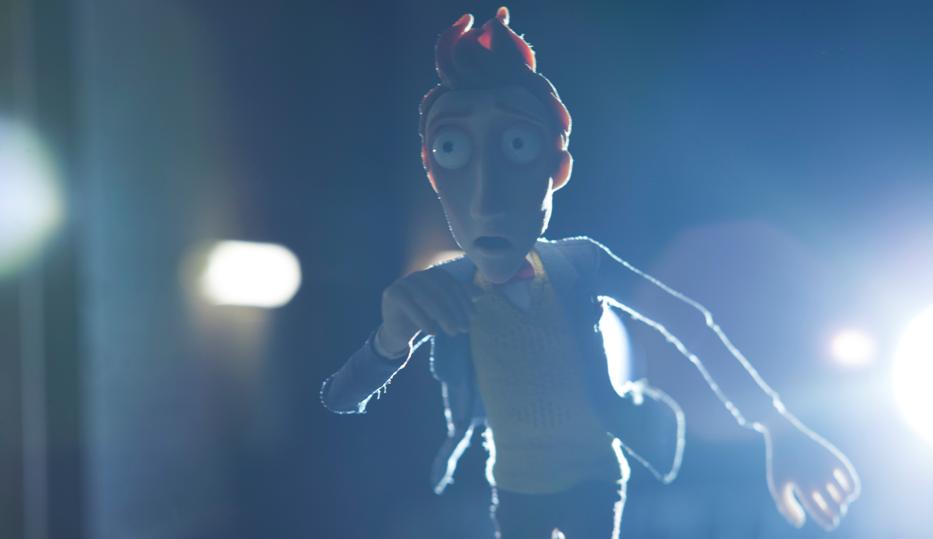 During a press conference that took place at the GSMC, the Anima Syros team that will travel to Annecy -Vassilis Karamitsanis, President of Asifa Hellas and the Anima Syros International Animation Festival + Agora, Panayiotis Kyriakoulakos, Vice president of Asifa Hellas and lecturer at the School of Engineering of the University of the Aegean, and Marineta Kritikou, film, stage and multimedia director and Agora moderator, who will promote the Greek projects at the Annecy Film Market (Mifa) - presented Asifa and its work.

Karamitsanis presented the results of the cooperation between the GSMC and Asifa Hellas, emphasizing the support that the GSMC has offered aiming at the export of Greek cultural products and the attraction of foreign investments. Asifa Hellas is the Greek branch of Asifa International and represents Greek animation. It cooperates with the GSMC in the context of the National Plan of Action for Animation and Games. A product of this cooperation was the campaign #GreekAnimation Rocks in a series of actions promoting Greek animation. 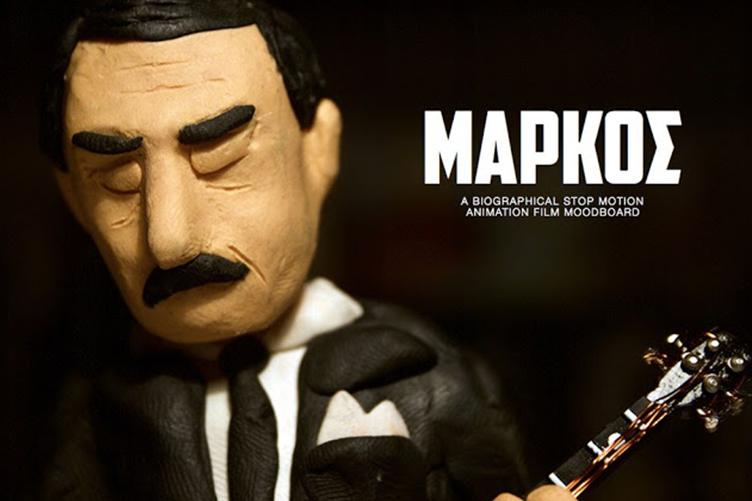 Panayiotis Kyriakoulakos further elaborated on the actions of the Greek Animation Rocks campaign for the year 2017, namely the first Greek participation in the Annecy Festival (June 12-17. 2017), where Greek Animation Rocks presented the history, the present and the near future of Greek animation, unveiling a cultural and business plan for its development, showcasing the projects and creators who dare to overcome the nation’s socioeconomic crisis and aspire to the development of international co-productions. The action was supported by the Hellenic Secretariat for Information and Communication, the Greek Film Centre, the Hellenic Broadcasting Corporation (ERT), and the French Institute of Greece. 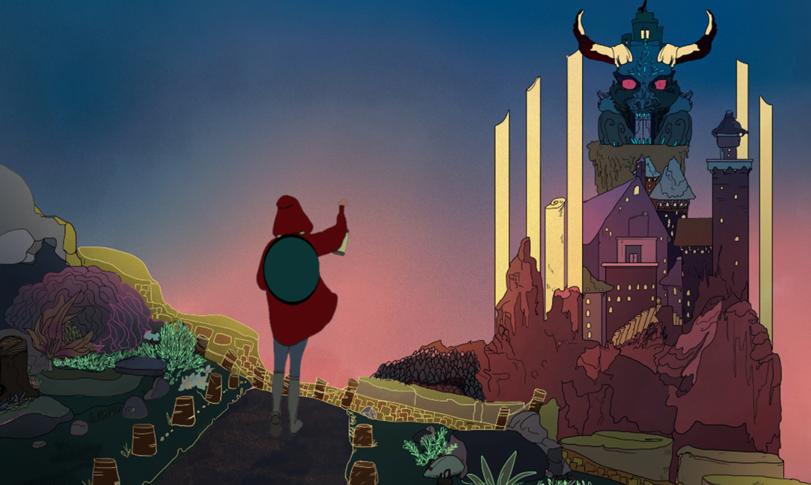 ASIFA HELLAS also supported the introduction of a 25% cash rebate scheme for all audiovisual production expenses in Greece. AH supported five projects at the Pitching Session of the Animasyros 10th International Animation Festival’s Agora (Syros, Greece 27 September - 1 October 2017). Moreover, it signed a cooperation protocol with ASIFA China to strengthen bilateral business and cultural ties in the field of Animation (Xiamen, China 12-17 October 2017). It also organized a celebration of International Animation Day at the French Institute of Greece. And in cooperation with the Thessaloniki International Film Festival (TIFF) it showcased the results of Greek Animation Rocks so far at the 58th TIFF (Thessaloniki, Greece 2-12 November 2017). 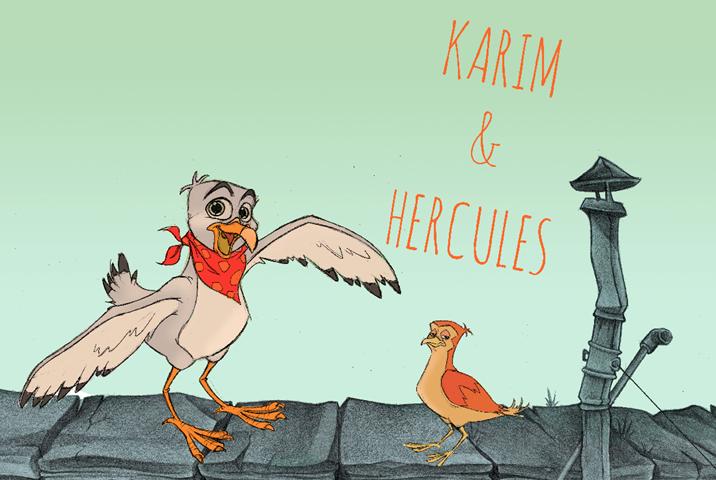 Marineta Kritikou stressed that this year’s Greek presence in Annecy will be more powerful and presented the 16 projects that will travel to Annecy this year, which include 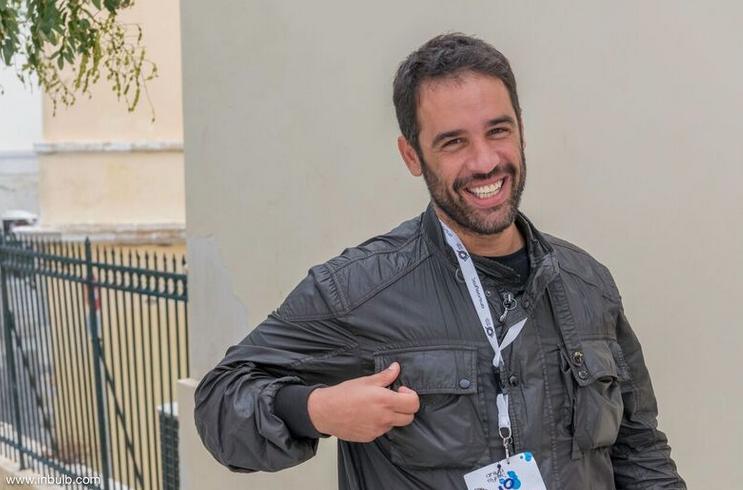 Greek news Agenda interviewed* Vassilis Karamitsanis on the current Greek animation production, the cooperation between Asifa and GSMC and his expectations from the Greek participation at the Annecy Festival.

Born in Athens, 1976, Karamitsanis is a lisenced attorney-at-Law by the Athens Bar Association He has a degree in Law from the Aristotle University of Thessaloniki and completed his post-graduate studies in the Universities of Rotterdam, Hamburg and Aix-Marseille III. He's president to ASIFA HELLAS - and Animasyros International Animation Festival + Agora. He was recently elected member of Board of Directors of CIFEJ (International Centre of Films for Children & Young People). 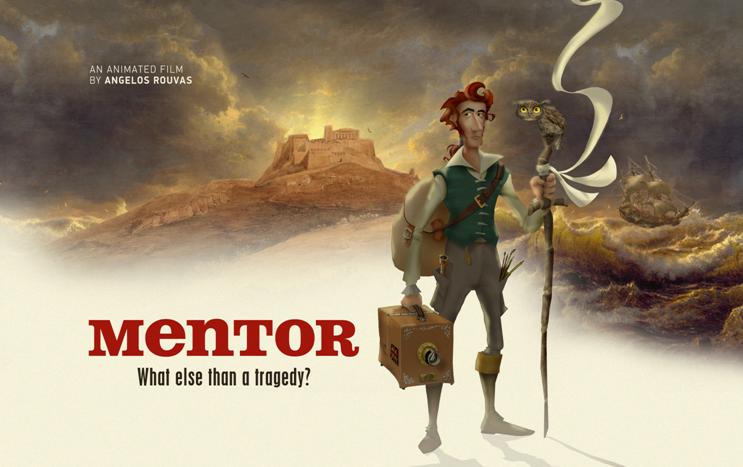 Law 4487, voted by the Greek Parliament in August 2017, sets the new legal framework for the development of the country's audiovisual sector. How do you think it will help animation production?

The new legal framework set out for the support of audiovisual productions is the first one entirely treating cinema as a vehicle of social and financial development. This is a very encouraging fact, as we all know that cinema in low-capacity European countries like Greece has been rather underfinanced by both private and public sources over decades. More precisely, in the field of animation, we believe that the new incentive providing a substantial cash rebate of 25% will soon bear fruit. Especially  for international co-productions, as well as large-scale national initiatives, the rebate may prove to be a long-term tool for better produced and distributed animation works that could turn our growing animation community among the most dynamic players in our region. 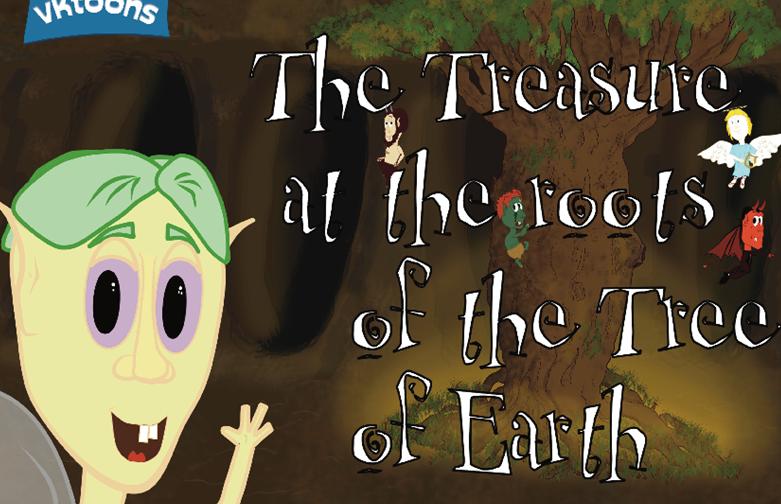 “The treasure at the roots of the tree of earth”by V. Karadimas, 2D CG / Digital Puppetry, TV series, 17 X 7 min

Would you like to tell us a few things about ASIFA's collaboration with the General Secretariat for Media and Communication of the Ministry of Digital Policy, Telecommunications and Media? How did it start and what are its accomplishments so far?

Since its beginning in the 00's, ASIFA HELLAS - Hellenic Animation Association has been forging ties with competent public authorities in Greece and the EU, aiming both at financial support and the endorsement of joint activities for the promotion of Greek Animation. 2015 was a milestone year for us, since it marked 70 consecutive years of Greek Animation history. It was on this occasion that, together with the competent General Secretariat for Media & Communication, we outlined a multi-year development plan for the  strengthening of our community, the enhancement of its actions worldwide and its gradual evolvement into a considerate international player. Since then, we’ve had the pleasure of reaping an impressive number of rewards, most notably the hosting of numerous selected Greek Animation tributes around the world at festivals and other events, the successful launching of our ongoing multi-action campaign #GreekAnimationRocks and, of course, the radical increase of Greek Animation visibility in media and audiences globally. 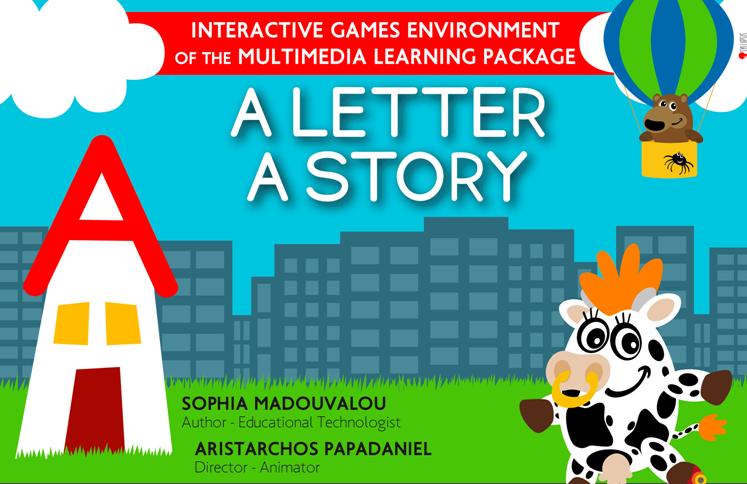 "A Letter - A story",  by A. Papadaniel and S. Madouvalou, interactive web-based animation

What do you think about current animation production in Greece?

We are very optimistic. Greece is at a developing stage towards becoming a regional player in the animation industry, thanks to a large number of avid, highly-educated animators becoming active along the way. We are delighted that new animation businesses start up every year in our country. To be honest though, it’s been a decade now that Greek Animation has been growing increasingly important in the international animation scene. The interest of a global audience at last year‘s #GreekAnimationRocks at Annecy has been remarkable. We still have a long way to go however, as we join forces with all stakeholders and the Greek State striving for a better future for our national animation community. 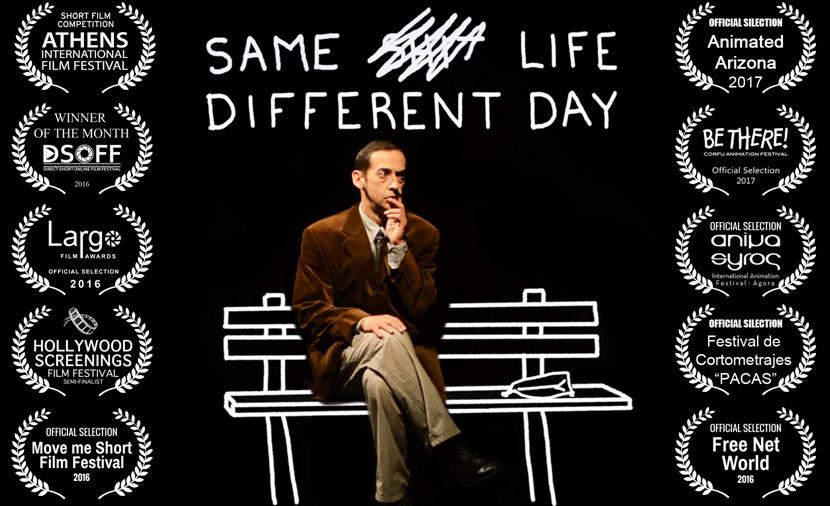 What are your expectations from the Annecy Festival?

It is the second time that the Greeks peacefully invade the French Alps. Following last year's positive outcome, this June we plan a stronger presence at MIFA, the Annecy festival's market. We have a larger and better placed pavilion, we produced a comprehensive printed Hellenic Animation Guide for the first time and we’ve scheduled a range of communication events throughout the Festival’s duration. With a rich portfolio of completed works and works in progress from Greece, Cyprus and the Greek Diaspora, we intend to make our presence more powerful this year, building links with existing and new partners, enhancing the visibility of Greek talent worldwide and discussing synergy schemes to be developed in time. 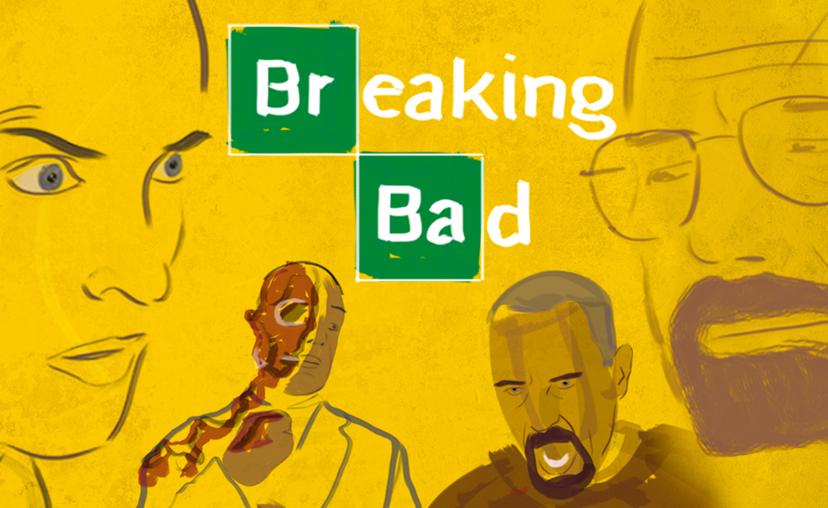 You are the President of Anima Syros International Animation Festival and Agora. What is its contribution to the enhancement of Greek Animation?

Since its establishment in 2008, Animasyros International Animation Festival + Agora has been advocating the empowerment of Greek Animation by showcasing the best of our national animation cinematography. We have been lucky enough to witness an impressive growth of national production over the years. Furthermore, we’ve organised a number of initiatives bridging Greek animators with key-players of the global industry. Our most important achievement is the establishment of the Agora in Syros, a unique regional market place for animation professionals from Europe and around the world. For the first time this year, we host the Athens Animation Agora just prior to the festival in September 2018. In this new endeavour, we are proud to receive the endorsement and support of the Hellenic General Secretariat for Media & Communication.