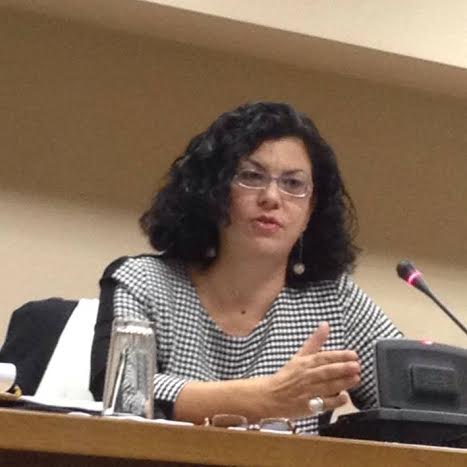 Maria Karamessini is the President and Governor of  the Greek Public Employment Agency  (OAED) and Professor in Labour Economics and Economics of the Welfare State at Panteion University.

Professor Karamessini has published widely on social policy, labour market and industrial relations in Greece as well as South Europe and has participated in a great number of official expert groups of the European Commission on employment and gender equality issues. She recently co-edited with Manchester University Professor Jill Rubery the book “Women and Austerity. The Economic Crisis and the Future for Gender Equality” (Routledge 2014), While she has just published an extensive article on the impact of austerity policies since 2010 on the Greek social model ("The Greek Social Model: Towards a Deregulated Labour Market and Residual Social Protection") as part of the ILO's publication “The European Social Model in Crisis: Is Europe losing its soul?”

Maria Karamessini spoke to Greek News Agenda* about unemployment in Greece, the problems of the Greek labour market and the low female employment rate, the re-engineering project that will redefine the role of the OAED as a labour market regulator, the new schemes for combating unemployment and finally, the need for a robust social policy in times of austerity.

What are the main problems of the labour market in Greece today?

The most serious problems right now are unacceptably high unemployment and the migration of young people -especially young scientists. Another big problem is the erosion of labour rights, which is due to changes in the institutional framework adopted throughout the first Memoranda (2010-2012), and to the bad conditions of our labour market, characterized by the proliferation of phenomena such as wage arrears, uninsured labour and part-time contracts. Finally, an important problem is the new wave of exits to retirement – mostly from the public sector – which was caused by the last pension reform. This also occurred with the 2010 pension reform which drove many people even in the ages of 50-55 to retire early, for fear of losing large part of their pension rights. People in their fifties are usually at the peak of their careers and could offer a lot if they remained in the labour market.

Why is the employment rate in Greece is so low, compared to other European countries?

This is the combined outcome of a low rate before the crisis and the effect of the crisis. Between 2008 and 2015 the overall employment rate dropped from 61% to 51% as a result of a huge decline in employment, which is a social disaster. But in 2008 the Greek rate was the sixth lowest rate in the EU.

The low overall employment rate before the crisis was entirely due to the feeble female rate, since the male rate was above the EU average. In fact, Greece had the third lowest female employment rate in the EU after Malta and Italy. It must be said that this percentage had been rapidly increasing during the recent decades –while of course remaining among the lowest in Europe-, but with the onset of crisis in 2008 this upward trend was reversed.

Historically speaking, the reasons for the low rate of female employment are the patriarchal values and practices of the Greek society as well as the underdevelopment of the tertiary sector (until the mid  1970’s) and welfare state services (until 2000), areas where women are traditionally employed. Labour discrimination against women persists, especially against hiring pregnant women and generally women of reproductive age. Also, there is a lack of employment opportunities for young women who have secondary education. Women that come from low educational strata have the desire to work but, unfortunately, lack employment opportunities.

How has OAED responded so far to the needs arising from the crisis?

Up until the crisis, OAED applied very classic employment schemes that were, in my opinion, and according to all the evaluation studies that were carried out, completely ineffective. The advent of the crisis brought to light all the shortcomings of the previous policies, while also creating new challenges. The biggest challenge was that the number of unemployed skyrocketed, which meant an increased need for labour counselors in OAED, while at the same time our staff was reduced by 30-35% -due to the early retirement wave I mentioned before - and the people that left were never replaced. Furthermore, we had to absorb the functions of institutions that were being phased out and were implementing large parts of social policy, such as housing policy and social tourism. So you understand, personnel-wise we were stretched very thin: our labour counselors had to cover basic needs such as distributing unemployment benefits, so they switched to purely administrative work. This meant that during the first period of the crisis, OAED was unable to play its role, to stand by the unemployed and help them find work. So in my opinion OAED has not been able to respond effectively to the problems created by the crisis, although it did implement many employment schemes that slowed down, to a degree, the rate of unemployment; however those were only temporary defensive solutions.

On the other hand, the crisis led to a redefinition of what types of schemes are necessary and effective in times of crisis. The effort made over the past year, at least since I took office, is to redesign the employment schemes and the same effort is made by the Ministry of Labour that is responsible for the overall planning of employment policies.

So what does OEAD do to combat the unemployment rate, currently at 24,4%?

In order to address high unemployment, OAED is currently running a series of employment schemes, the most important of which are: public works schemes in municipalities and the public sector, subsidies to the private sector for work experience or job maintenance programmes, subsidies for self-employment and entrepreneurship and, finally, other types of schemes that combine training with employment. We have also run some training programs for young unemployed.

Employment schemes are programmes that are by definition designed in order to both stem the uncontrolled rise in unemployment and limit long-term unemployment. Prolonged exclusion from the work force leads to social marginalization, even more so in times of crisis. The longer someone is excluded from working, the lower their self-esteem and morale is, and the more discouraged they become from seeking work. Even the unemployed who have not lost their skills or technical training, are uncertain about whether they will be able to face up to the challenges a job.

Right now I think we have established the necessary conditions that will allow us to move forward, because we know what we want and how to go about it. We aim to combine the redesigned schemes with organizational changes that will be brought via a major re-engineering programme of OAED. This programme, aiming at reorganizing the business model of OAED, is funded by the European Commission and carried out with the technical assistance from three other European Public Employment Agencies, those of Sweden, Germany and the United Kingdom. We have been implementing this change for about three years, with increased intensity now that we are entering the final phase.

Can you talk a little more about this the re-engineering programme and what improvements it will bring in the way the organization works?

With this re-engineering programme we aim at redefining the role of the OAED as a labour market regulator and as a provider of active labour market programmes. One aspect of the project is the redesign of the employment policies so that they become more efficient and the second, more radical dimension is the intervention of OAED in the chain of labour supply and demand. OAED aims at becoming the main facilitator of  matching labour supply and demand by providing electronic services and tools to both the companies looking to hire and the jobseekers.

This matching of labour supply and demand will be done through the new OAED portal but also through OAED’s employment counsellors using an innovative personalised approach. The counsellors interview jobseekers individually, registering in the information system their educational and occupational characteristics, and the characteristics of the job they are looking for. Then, in collaboration with the jobseeker they design an individual action plan, which contains a full range of necessary actions facilitating the jobseeker’s access to the labour market. The information system pairs jobseekers and vacancies, matching the characteristics of current vacancies to the qualifications and capacities of current jobseekers. Besides this efficient pairing between jobseekers and vacancies, the new information system will provide us with a better monitoring of the individual action plans since it keeps a record of all the actions taken (interviews arranged, etc).

A third aspect of the re-engineering programme is that the new information will render some administrative tasks redundant, so the employment counsellors, after some training, can focus on counselling work. We intend to provide personalised counselling services to more and more unemployed people, but we currently face a short supply of counsellors. We will start from the beneficiaries of the new generation of public works schemes designed by the Ministry of Labour. We envisage the expansion of our counselling capacity in the near future through the reduction of the workload made possible under the re-engineering programme, as well as through the hiring of 360 new counsellors, which a recent decision of our government.

Last but not least, OAED will play a key role in finding apprenticeships for all students and graduates of upper-secondary education vocational schools and public post-secondary vocational training institutes, thus regulating their entry in the labour market. Finally, our Agency will be responsible for providing support to the beneficiaries of the guaranteed social income regarding their labour market integration.

As you noted in your recent report for the ILO, the changes in the institutional framework of labour relations, brought about their disintegration. Are there going to be legislative changes to amend the current situation?

The government is trying, through negotiations with the European institutions and the IMF, to restore collective bargaining, in essence to put it back on its feet. The way collective bargaining operates today has led to the truncation of labour rights and a deterioration of labour relations; so one has to readjust the system and take a closer look at the role of the actors involved. We have to tackle some very important issues, such as whether administrative extension of collective agreements will be brought back, whether sector agreements will take precedence over firm-level agreements etc. A group of international experts has been jointly appointed by the European institutions and the Greek government with the mandate to propose reforms in industrial relations which are in line with European best practices. The objective of the Greek government is a return to normality and stability for the collective bargaining system of the country.

Taking into account the current budgetary restrictions, is it possible for the government to apply Left-wing employment policies?

All policies aiming at reducing unemployment and fighting poverty are an integral part of the parallel programme that the government has promised to implement in order to offset the negative impact austerity policies and restrictive fiscal measures have on Greek society.

Through these policies the government intends to prove its difference from its predecessors. This does not mean that we have all the resources we would like to, but OAED strives to be one of the tools the government can use in order to implement a different type of policies and a reform of public administration that will bear the imprint of the Left. I would say that the government will have to prove its efficiency and measure up to its Left identity in relation to major issues such as combating unemployment and poverty, and the creation of a new welfare state. The goal is to implement the reforms and concrete changes that people who voted for this government yearn for, and against which all citizens will assess the work of the current government in the next elections. 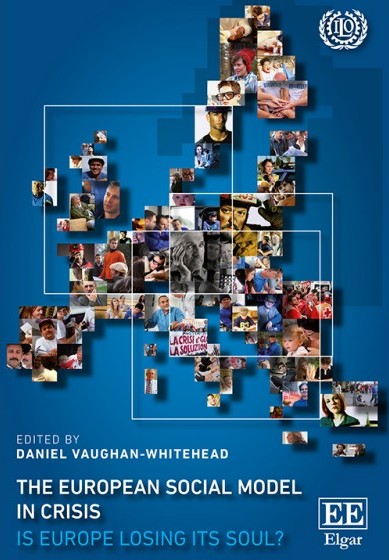