Being part of the EU’s "Projects of Common Interest", the Eastern Mediterranean natural gas pipeline project relates to an offshore/onshore natural gas pipeline, directly connecting East Mediterranean resources to Greece and Italy via Cyprus and Crete that could: enhance Europe’s gas security of supply via diversification of counterparts, routes and sources; develop EU indigenous resources such as the offshore gas reserves around Cyprus and Greece; and promote the development of a South Mediterranean Gas Hub. It constitutes an important element in Greece’s endeavors to take advantage of its geostrategic position, as PM Alexis Tsipras has recently underlined. A noteworthy step towards the promotion of the construction of East Med was recorded on April 3rd, following a joint Greece-Italy-Cyprus-Israel declaration.

With an estimated length of 1,700 kilometers, East Med pipeline, promoted by IGI Poseidon SA, is expected to become the world’s longest subsea natural-gas pipeline. The proposed pipeline aspires to connect the East Mediterranean gas resources to the European gas system, with a transport capacity of up to 16 billion cubic meters.

In the context of shedding light into the significant geostrategic and geopolitical aspects of this project, Greek News Agenda interviewed* Constantinos Filis, an expert on energy issues, Research Director of the Institute of International Relations and Head of its Russia-Eurasia & SE Europe Centre:

Given the magnitude and the high estimated cost of East-Med, do you believe that the current volumes of natural gas found in Israel and Cyprus suffice for this project?

Certainly yes. Based on current finds, Israel can export up to 16 billion cubic meters (bcm) of natural gas for a period of 20-25 years. Given that East Med’s capacity does not exceed 10-12 bcm annually, it is obvious that two if not three projects can be supported at the same time. As Israel has expressed its willingness to feed regional markets, we are expecting – despite political difficulties – an attempt to supply the big and thirsty Turkish market. The needs of Southern Turkey, which are estimated at 8 bcm can be met by Israel, leaving ample natural gas to be exported to Europe through Greece. If we include Cyprus in the equation, there is even greater potential.

The East Med project got a boost with the recent support it secured at a European level, but it still has to persuade involved parties that it is worth looking at it as a priority. It is a matter not only of feasibility (a number of studies prove it can be done), but also of whether East Med can be considered a project that offers geopolitical and geoeconomic advantages, putting aside any complications/risks that other alternatives have. Its obvious comparative advantage is that it involves two EU member-states and the most stable and prosperous state in the region, Israel.

In terms of financial viability, can the East-Med pipeline coexist with a natural gas pipeline linking Israeli gas fields to Turkey or are these pipelines mutually exclusive?

As we’ve already said, East Med can definitely coexist with a pipeline linking Israel with the Turkish market. The picture becomes blurred, however, if Tel Aviv decides to transport its natural gas to Europe through Turkey. In that case, East Med will be left out of the game. But, there are given doubts. The creation of a new inland pipeline system entails a significant cost, while rendering Turkey an important link in the EU energy security supply chain would give Ankara a negotiating advantage over Brussels. This would of course not only embed Turkey's uncertainties in the project, but would also be geopolitically one-sided, as it would increase Ankara's strength exclusively and increase its sway with producers (its having the additional role of transit country rather than being merely a customer), multiplying the potential risks deriving from its management of this advantage.

How does Egypt affect the overall natural gas landscape in the Eastern Mediterranean area?

One very likely scenario is the utilization of liquefaction facilities in Egypt. Here, Israel and Cyprus could more economically send a portion of their production to Egypt, where their gas will be liquefied and be exported as LNG, probably to Europe, as competition and distance make the prospect of exporting to Asia unlikely. The riskiness of dealing with Egypt as long as the situation is not fully stabilized is understandably being taken into account by Cyprus and, in particular, Israel. As said, the advantage here is the lower cost, although there are two potential disadvantages: the possibility that the Zohr field will have the necessary quantities to cover both LNG facilities and the de facto downgrading of Israeli and Cypriot natgas – which would, in this case, have only a minor role (in the final mix) in supplying Europe. Egypt can, of course, export from the Zohr field, once it has satisfied its domestic market of 90+ million consumers.

Can Turkey’s policy constitute a threat for East-Med pipeline?

Most of the project concerns the laying of an undersea pipeline in Israeli and/or Cypriot territorial waters initially, and then in international waters before it reaches Greece. Turkey has no legal argument for hindering the construction of this project.

It is significant that, although Ankara disputes Nicosia’s right to carry out tenders for concessions of energy parcels, major companies, including Total, ENI and Exxon-Mobil, have defied Turkey’s threats and obtained the relevant permits.

So the only thing Ankara can do is continue to threaten to use military force, not so much as a real likelihood, but more as a tool for influencing the decisions of involved parties (states and companies) by adding – on top of the technical difficulties and costliness of the project – the issue of the geopolitical complications Ankara can cause, so that the risk involved in the East Med makes the whole endeavour less attractive.

The next move (should the project move ahead) is the harassment, in various ways, of the vessels that lay the pipeline. Although this is not a highly probable eventuality either, even if it does happen, it cannot be carried on for very long, due to the lack of legal grounding.

Thus, diplomatic actions and initiatives are required. Such actions and initiatives are not favored by the domestic state of affairs in Turkey (flare-up of nationalism, close result in the referendum, need for sensationalist posturing to strengthen national morale), but if Ankara fails to seek normalization at some point, it will find itself in a very difficult position. 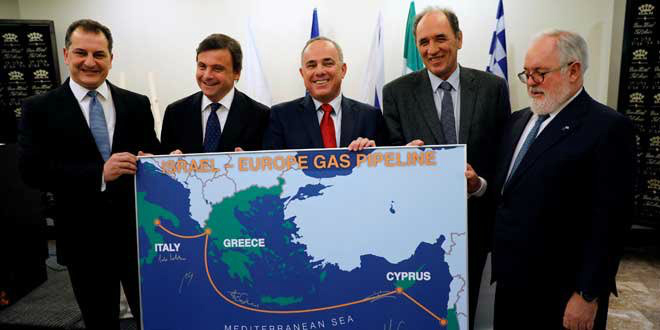