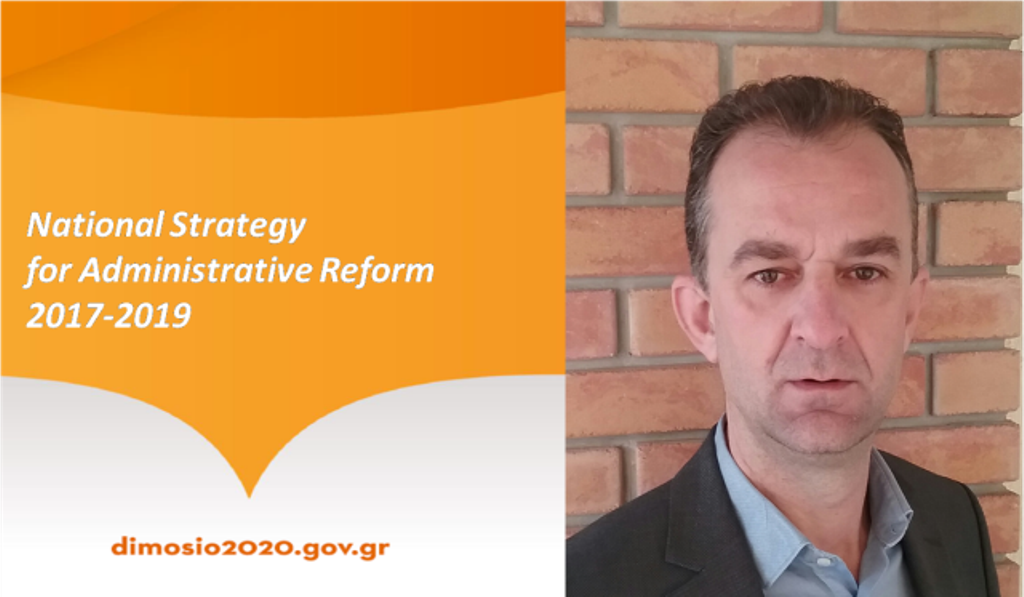 Administrative reform is among the top priorities of the Greek government aiming to transform public administration into a key tool for economic prosperity, serving at the same time the needs of citizens and businesses. Within this scope, a coherent and well prepared “National Strategy for Administrative Reform 2017-2019”  has been recently put forward.

Asked whether administrative reform is part of the Greece’s economic adjustment program, Theodorakis said that although fiscal consolidation requires adequate measures in the administration, establishing an independent, functional and transparent public administration has long been an enduring request. On the other hand, simple horizontal spending cuts without structural reforms bear no result. In order to succeed, a coherent and well prepared reform strategy is needed, as with the current National Strategy for Administrative Reform 2017-2019, not as an obligation but with the support of the political leadership and all public administration.

Regarding the size of the public sector, Theodorakis referred to the numerous international reports indicating that Greece does not suffer from overstaffed public administration, and noted that the main problem lies with the irrational allocation of staff. He further underlined that the newly established mobility system based on job descriptions and digitized procedures will bring the right people with the right skills to the right place through a transparent and easy mechanism combating clientelism. At the same time, emphasis is given on stable, permanent and de-politicized working relationships in the public administration so as to provide quality, transparent and effective public services.

Regarding the technical assistance of Expertise France -the French international technical cooperation agency- to the Administrative Reform in Greece, Theodorakis explained how helpful this assistance has been towards the implementation of reform policies, underlining however that any reform conducted in public administration will be conducted mainly by the Greek administration. For this reason, Greek civil servants are collaborating with French experts in work-groups showing remarkable results, he added.

The Secretary General also referred to the term “participatory administration” mentioning that the Strategy foresees the evaluation of public services by citizens through a web platform as well as the improvement of public consultation including for the first time local government decisions. Promoting the use of open data in the following years is an additional means of enhancing citizen participation in public administration and encouraging interactive communication. The ultimate goal is to have a more effective, but most importantly, a more democratic public administration. 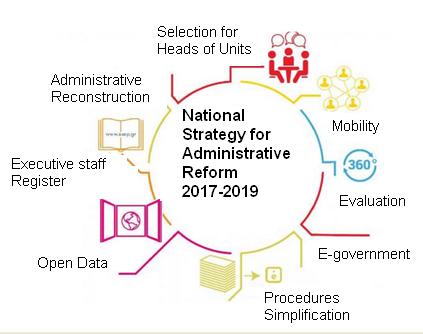 The National Strategy for Administrative Reform focuses on 8 principal areas:

- Structures and procedures: Through the re-organization of formal structures and the simplification of administrative procedures, the aim is to reduce operational costs while enhancing the quality of services to both citizens and business

- Human resources: Emphasis is given on meritocracy, transparency and impartiality so as to ensure an efficient and effective administration

- Regulatory governance: Modernization of the legal and regulatory environment as well as creation of a single point of open access to legal information for the public sector, citizens and business.

- Transparency, accountability and open governance: The aim is to enhance citizen participation in decision-making through public consultation, evaluation tools and open data platforms.

- E-government strategy: Improvement of public services provided to citizens and businesses through the simplification and digitalization of procedures developing new skills and competences in public administration.

- Anti-corruption: Through the National Anti-corruption Strategy the aim is to identify sectors with the highest level of corruption risk, improve legislation and codes of ethics, enhance accountability, implement Public and Private Sector Collaboration etc.

The number of civil servants has been reduced since the beginning of the economic crisis by 18.4% (i.e. 127,236 fewer civil servants in 2016 than in 2009), bringing Greece below the OECD average.

Between 2013-2014, organizational structures also decreased by 23% in General Directorates, 38% in Directorates and 35% in Departments, generating important budget cuts in wages and remunerations.

Moreover, administration in Greece has an ageing workforce with an average of 45.3 years in 2016 (43.1 years in 2012), hindering innovation and the development of new skills. The Greek government intends to adopt new programming schemes in order to hire “fresh” human resource and tackle the ageing of the workforce.

Reforming public administration does not necessarily mean further reduction in staff and services but rather increased performance through optimal allocation of staff, simplification of procedures, extensive use of digital technologies etc. In the aforementioned National Strategy, great emphasis has been given to the workforce in order to improve the internal functioning of public administration through initiatives such as a new mobility system, performance evaluation, selection for heads of units, job description etc, currently implemented in the public sector.

According to the Ministry of Administrative Reconstruction, Greek Public Administration will gradually become the guarantor of social cohesion and solidarity, as well as the vehicle for economic growth. The ultimate goal is to respond to the needs of society offering high quality services to citizens - especially in these times of crisis – and to businesses.