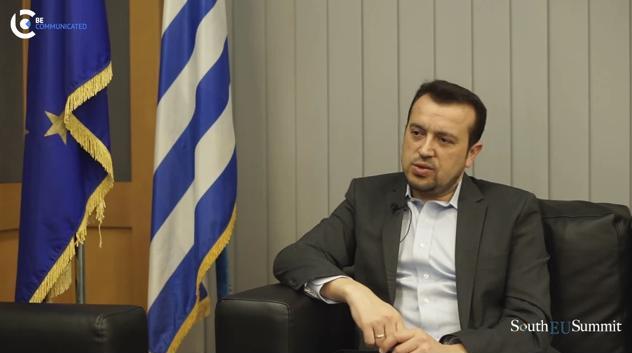 “With targets set for Greece to exit the memoranda era this summer and conversations on debt relief measures having commenced, Greece has arrived at the stage of having a sound fiscal situation”, Minister of Digital Policy, Telecommunications and Information Nikos Pappas said in an interview with South EU Summit.

In his interview, Minister Pappas explained that Greek economy has turned the corner, as is evidenced by its comeback in the international bond market and the positive 2.5% growth forecast for 2018. He also underlined that Greece is actively working to attract investments within the scope of the information and communication technologies (ICT) sector. Minister Pappas added that Greece, with its international corporations and its foreign policy has shown that it can create triangles of stability, with Israel, with Egypt and others. Finally, the Greek Minister expressed optimism in his interview that with a combination of reforms by the end of their first term in September 2019, the government will have created nearly 500,000 jobs.

These are highlights of Nikos Pappas interview:

After a bleak period of economic retraction during the last decade, words like “stability” and “surplus” are the new buzz phrases used to describe today’s Greek economy. The international bond market has seen Greece’s powerful comeback, and a positive 2.5% growth forecast for 2018 are signs that the country’s economy has indeed turned the corner. With targets set for Greece to exit the memoranda era this summer, and conversations on debt relief measures having commenced, Nikos Pappas, Minister of Digital Policy, Telecommunications and Media, says that Greece has arrived at the stage of having “a sound fiscal situation.” Not only has the country met its surplus targets, “we have been overachieving the surpluses,” he points out.

Mr. Pappas knows a thing or two about the Greek economy and the inner workings of the government, having served as the minister of state in 2015 under Prime Minister Alexis Tsipras, before being appointed as the first minister of its kind. The creation of the Ministry of Digital Policy, Telecommunications and Media in 2016 is seen as a prime example of a new era in Greece, as the country leaves behind the vestiges of economic instability and zooms towards increased efficiency and transparency through its top-to-bottom digitisation process.

The opening of the ministry marks a tangible change that the government is generating, transitioning the country’s GDP to an added value-based economy in line with the government’s Development Plan, known as “Greece 2021”. This plan is rooted in the promotion of increased exports and in the development of high value-added sectors, such as real estate, information and communication technologies (ICT), energy, food, agriculture, logistics and life sciences.

Pappas, one of Greece’s most outspoken ministers, represents the face of this great change, and is confident that digitisation is going to be a crucial element for the country in achieving its ambitious goals. Greece is actively working to attract investments within the scope of the ICT sector, explained Pappas, which “I believe, [is] the sector of all sectors.” But it’s not just being done in an effort to keep up with some of Greece’s digitally savvy neighbours, Pappas ensures that it is a concrete step towards increased investments and economic growth.

“It is a sector that can make each sector of the economy more productive and make our life easier, our job more creative and more productive, and our interaction with the public sector more effective.” He emphasised the importance of educating both Greeks and international investors on the fact that things are changing “radically” in the country’s digital sector.

On an international level, Pappas says that Greece has received “interest from many parts of the world for investment in the telecom sector. On top of that, we have decided to direct each and every euro available in investment in future proof technologies,” in other words, products and services that will not need to be significantly updated as technology advances, serving as long-term investments.

At a domestic level, this change will be realised in the improvements of everyday life for Greeks, like “safe access to very high speed connectivity to the internet. This is going to change our lives radically.” Not only that, Pappas pointed out that the Greek Government is dedicating as much European funding as possible “to create [a] team of people that can educate people, so we are building educators….not only to develop infrastructure, but to make people familiar with the applications that come on top of this infrastructure.” He admitted that it would be a big investment, but emphasised that increasing Greeks’ digital skills “is our priority, we’re going to spend a lot of money on that and I think that this is money that is going to be paid back with the productivity of the economy.”

This change will also penetrate the public sector, which Pappas said the government is working to digitise rapidly. In fact, a successful pilot project was undertaken in the Ministry of Digital Policy, Telecommunications and Media. “This Ministry is fully digitalised and all papers are moved around not by paper, but digitally. I arrive in my office in the morning and I can have the work flow picture of what is going on, what is left to be done, and this is going to be expanded for the whole of the public sector within 2018.”

While the upgrade will certainly bring increased convenience and efficiency, it also speaks financial volumes. Once the entire process is diffused into the public sector, Pappas estimates that the digital upgrade “is going to save us 400 million euros in costs per year. This is a shy estimation I would say, because you cannot put a number on the working hours that you save when everything is there in front of you.”

In addition to offering a technology upgrade for Greek citizens and government bodies, the country is also veering towards one of history’s most innovative markets: outer space. The recent launch of the Hellenic Space Agency highlights the country’s pursuit of scientific excellence and its efforts to reverse the “brain-drain” that pulled bright Greeks out of their country to pursue the space industry in places with more developed programmes. These new advancements – coupled with the government’s commitment to boost the digitisation of the economy and improve ICT infrastructure – will undoubtedly boost foreign investment and pay dividends, literally.

Pappas confidently declared that Greece is now in a stable place economically, if not geographically. “Everybody can see that we’re in an area that has got a lot of places of instability, but Greece, with its international corporations and its foreign policy has shown that it can create triangles of stability, with Israel, with Egypt and others.” One of the biggest contributing factors to spreading regional stability can be seen in Greece’s large number of cross-border projects. “We prioritise projects that connect countries in the long run and projects in such infrastructure as energy and telecommunications are quite important.” Pappas said that the Greek Government is “very, very happy” about the fact that outside players have decided to engage in the country’s target to fund €25-billion in large-scale infrastructure projects through public-private partnerships and joint ventures, particularly in the logistics sector. “We’re very optimistic that it’s going to be (…) strategically important and of course profitable for the investors.

Things are certainly looking up for the Greek economy, and Pappas ensured that this will continue as the country moves to the next phase of economic independence and exits the bailout programmes this summer. When asked about the risks of any ‘backtracking’ on reforms, Pappas answered confidently, stating that “there is zero risk because this government has shown that it can keep up to abiding to the agreements and within the agreements finding space to do extra things for the people that are in need, do more things for improving the investment atmosphere.”

He noted that in addition to meeting its bailout commitments, the government has also worked for “the creation of a buffer” in order to secure “a smooth exit to the markets when the programme is concluded.” Before the programmes finish, the government plans to put its own set of reforms into place, which “will take the country to the next page.”

Pappas is optimistic that this combination of reforms “will dramatically improve the whole atmosphere in terms of investment, employment, job creation and the steady growth path that has started (…) is going to keep going.” He projects that by the end of their first term in September 2019, the government will have created nearly 500,000 jobs—a large feat for a country of just 11 million. “That would be a very good reason to present to the people to be re-elected.”