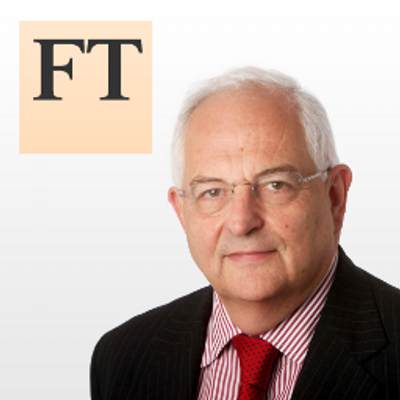 Martin Wolf, chief economics commentator at the Financial Times, distinguished author and expert on specific issues related to the developments in the crisis-hit countries of the Eurozone, was interviewed by Greek News Agenda on the current prospects of the Greek economy.

Q: During your recent visit to Athens, you presented facts depicting a slow, but steady recovery for the crisis-hit euro zone countries, with the exception of Greece. What do you think Greece might expect for the year 2016, given its current situation?

A: I am not a forecaster. But I would have thought that Greece should renew positive growth in the course of 2016, provided there are no further negative shocks. But the latter can hardly be ruled out, particularly when one considers both the refugee crisis and the economic risks in Europe and beyond.  The government must stick with the reform programme and begin to restore confidence in Greece among investors, both at home and abroad. I believe this is now feasible.

Q: The increasing number of Greek start ups in the high-tech sector emerging in the midst of this profound economic crisis has been gaining attention on an international scale. Do you think that Greece might benefit from other sources of economic activity aside from its tourism industry?

A: It is indeed essential that Greece develop internationally competitive activities beyond tourism. Greek people are able, industrious and enterprising. There is no reason whatsoever why, with reformed political and administrative systems that are honest, equitable and efficient, the Greek economy should not prosper. Macroeconomic stability is now no longer a remote possibility, though it is far from assured. What matters far more is to use the current opportunity to achieve fundamental reform. Populism, corruption and interventionism must end. In their place must come discipline, honesty and predictability.

Q: Do you consider a decision to invest in Greece right now a “wise” business move? Would you encourage potential foreign investors to do so?

A: I would encourage the bold risk-taker to make such a move. The rewards could be substantial. But the risks are also substantial.

Q: Debt write down, abstention from further fiscal tightening, emphasis on the structural reform process and solidification of long term institutions in Greece: which of the four do you believe will prove harder to achieve on the way to the country’s recovery – and is it only up to Greece to make this recipe work?

A: Debt write down is no longer such a high priority, since terms are now so favourable. Postponement of further fiscal tightening until the recovery is well entrenched would make good sense, but depends on additional external assistance. The priorities for Greece are indeed structural and institutional reform. Unlike debt relief and more fiscal support, these depend on Greece itself. Greece cannot obtain more resources from abroad on its own, though successful reforms should help secure private capital. But Greece can reform itself if it wants to do so.

Q: In a recent article for the FT, you assessed the economic pros and cons of immigration for the countries of Europe. Since January 2015, over 760,000 refugees and migrants have reached Greece via sea and land, the majority of whom continued their journey to other European countries. Do you think that, given the high unemployment rates in the crisis hit Eurozone countries, refugees and migrants looking for means to survive financially stand many chances to integrate?

A: The refugee crisis is of existential significance for the European Union. It is obviously creating huge challenges for Greece as a front-line country. There are countries in Europe that could easily absorb new immigrants, at least economically, because unemployment is relatively low. Among the big countries, Germany and the UK are in this position. Germany has already been exceptionally open to immigration of refugees. In the UK, however, the politics of immigration are far more difficult. The crisis-hit big countries – notably, France, Italy and Spain – are in no position to absorb large numbers of immigrants successfully. One wishes this were not true, but it is. The same seems to be true of Poland under its current government, though as much for political as for purely economic reasons.