In an interview with Greek News Agenda, Nikolaos Stampoulopoulos, founder and creative director of New Diaspora – a participatory narrative hub relevant to the current Greek migration flow, its causes, its consequences and its future – discusses the idea that sparked New Diaspora, its mission and future goals and comments on how we can turn “brain drain” into “brain gain” and redefine the Greek collective identity. 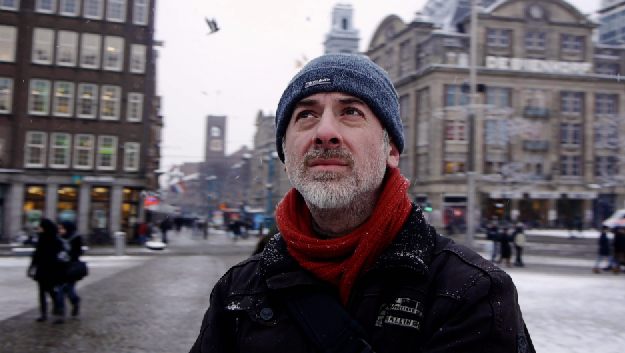 What is the idea behind New Diaspora? What makes this initiative so important?

Over the last seven years of continuous recession, nearly half a million Greeks have abandoned their country; adding up to thousands of their compatriots who moved abroad before the crisis officially broke out. Most of those people are young, educated and multilingual. In my opinion, if we don't manage to reverse this massive 'brain drain' or tap on it from a distance, the prospect of a successful productive restructuring of Greece seems exceptionally difficult, if not impossible. The same goes for the redefinition of a collective identity that is not determined by obsolete, and sometimes negative, cultural stereotypes.

Launched in March 2013, New Diaspora started out as a bilingual digital storytelling platform, focusing on the personal stories of the new generation of Greeks living abroad during the crisis. Since then, it has grown into a participatory narrative hub, relevant to the current Greek migration flow, its causes, its consequences and its future. New Diaspora's mission is to bridge the gap between Greek 'neomigrants' and their birthplace, empowering both sides by becoming a point of reference and social synergy, that encourages the members of an international community to connect to each other, share experiences and ideas, collaborate and pursue common goals.

Apart from telling stories that matter, we try to provide people with useful information on moving and finding work abroad. We also partner with numerous other initiatives and organisations, in an attempt to facilitate the need for international networking and promotion of extrovert and innovative Greek business and cultural activities. Our ultimate goal is to help as much as we can in creating incentives for the return of expatriate Greeks, eventually reversing the tide and turning the 'brain drain' into a 'brain gain'. The current developments in Greece and the rest of Europe make this a formidable task, to say the least.

New Diaspora has received wide Greek and international media attention, your social media reach is constantly growing while new partnerships are inaugurated. What comes next? Are there new projects under way?

To this date, the entirety of New Diaspora's content and activities has relied on volunteer work, and that also includes the mini documentaries I have directed and published online for free. We are now in the process of securing funds from institutions and private sponsors, in order to hire people who will redesign our website and make it more interactive, and also help us increase our content flow and community engagement. In the near future we want to co-organise networking, cultural and academic events in various countries, starting from the most popular destinations in Europe. In addition, we are hoping that our proposal for a new series of mini documentaries about Greek 'neomigrants' around the world will find the necessary financial support. The platform is already there to promote such a series, as well as to discover people who have compelling stories to share.

The economic crisis has sparked a massive wave of ‘neoemigrants’ in what is called the “Greek brain drain”, often recorded and commented in the Greek and international press. What differentiates New Diaspora in the way it presents and promotes the stories of these neoemigrants?

New Diaspora's unfair advantage is its dedication to the cause of recording a migration wave as it happens, without trying to beautify or sensationalise anything. We care for all kinds of stories and opinions, instead of selectively focusing on the exceptionally successful and exceptionally unfortunate that Greek media seems to prefer featuring. Moreover, by letting expatriate Greeks tell their own stories in an unmediated way, we believe we can inspire people to discuss issues, seek solutions and become the change they crave for.

There are many people interested on this subject, both in Greece and abroad; and I'm not referring to Greeks only. This is a case study on an altogether new type of workforce and entrepreneurial mobility, and no one knows how it will evolve and influence the shape of things to come.

You have been living and working in Amsterdam since 2009. What’s your own story of migration? How has it influenced your perspective?

I lived for five years in the Netherlands, where I worked as a freelance filmmaker, made new friends and got used to riding a bicycle instead of driving a car. While the crisis was escalating back in Greece, it sometimes felt like I was living in a parallel universe with a totally different economy, mentality and climate. It wasn't always easy to stay focused on building a new life in a place I knew from the start I will never belong to as much as I belong to my homeland.

During my stay in Amsterdam, I realized that the growing influx of my compatriots was a story no one else particularly cared to tell, so I started filming my friends and my impressions of my life abroad. I still struggle to organise all this footage, hoping to create a feature length documentary on the period "I went Dutch". Meanwhile, the preparation and management of New Diaspora became a full time obsession that led me to the decision of returning to Athens at the end of 2014; seeking funds and partners to carry on from there. The timing was far from perfect, but I haven't regretted it yet.

You have stated that redefining an obsolete collective identity – that somehow seems to be stuck in the “Zorba” cliché of the 60s – is absolutely necessary in the attempt to rebrand Greece, an undertaking that cannot be achieved by the ones who are left behind. Which would be the core elements of a new Greek collective identity?

The whole notion of a collective identity is that it takes a living community to define it. When that community breaks up, its identity inevitably gets fragmented and distorted, ending up like a blurry reflection of an idolised past. I don't think there is anything wrong with the ancient and more recent Greek heritage, as long as we keep reinventing it and adding to it. If the crisis and the migration it causes make us too depressed or alienated to do so, we become trapped in a stagnant narrative.

We live in the age of internet and mobility, however, and it's up to us to stay connected and exchange ideas and experiences that will tell the future generations who we were and what we achieved. Therefore, I prefer to be an optimist who sees an opportunity for renewal in this gigantic brain drain, providing that both the ones who left and the ones who stayed behind (or came back, as it is in my case) will work together and produce economic and cultural wealth. I wish I knew what will be the specific characteristics of the civilization we will leave behind. My hope is that they will include equal rights, cultural diversity, freedom of speech and uncompromising democracy.