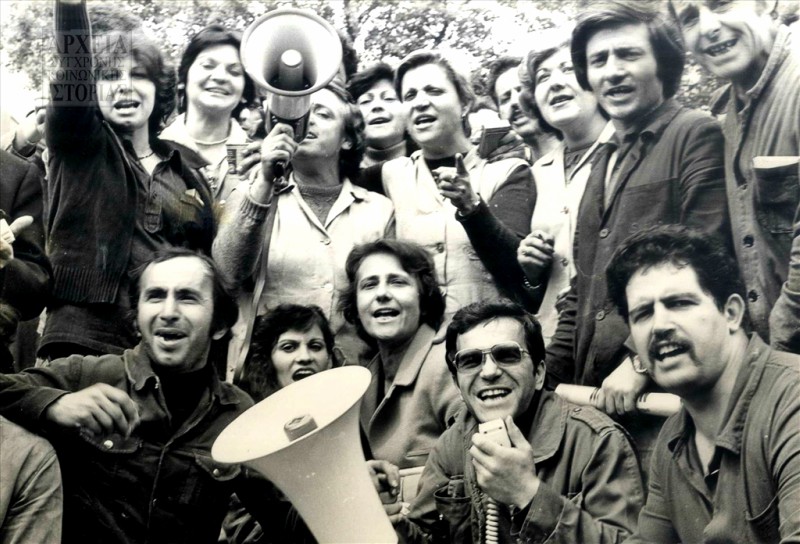 Metapolitefsi.com, the new digital platform created by the Contemporary Social History Archives (ASKI) institution, offers a presentation of Metapolitefsi, as we call the transitional period from the fall of the Greek military junta (1967-74) to the 1974 legislative elections and the start of the new democratic era that followed. One of the key events of the time was the referendum which took place on 8 December, 1974, which resulted in the abolition of monarchy and established the Third Hellenic Republic.

Metapolitefsi.com features articles, photos, historical documents of all kinds that can easily be browsed, whether for research purposes or simply out of curiosity for a period of time that has marked society and politics in Greece. It is the latest digital project by ASKI, following the great success of the makronissos.org digital museum about the history of Attica’s notorious political prison island, as well as the digitisation of a large number of important journals (including Epitheorisi Tehnis [1954-1967], Politis [1976-2008] etc.)

Our sister publication, GreeceHebdo*, spoke with historian Stathis Pavlopoulos, scientific advisor at ASKI, in charge of coordinating the creation of metapolitefsi.com, regarding the website as well as the historical events of the largely forgotten date of December 8, 1974. Born in Athens in 1984, Stathis Pavlopoulos is a PhD student in History of Modern Greece at Panteion University. His research focuses on the history of ideas and social history in the nineteenth and twentieth century.

In June 2018, the Contemporary Social History Archives (ASKI) launched the new website metapolitefsi.com. What does the term "Metapolitefsi" signify and what is the reasoning behind its presentation as a distinct part of Greek history?

The website metapolitefsi.com is the result of a research effort conducted by the Contemporary Social History Archives for two years, since the summer of 2016. However, this project stems from an already existing scientific interest at ASKI concerning the 1960s and 1970s in general. These decades mark two different periods for the Greek state and society, the transition from dictatorship to democracy. Over the past ten years, these periods have attracted historiographic interest in Greece and the rest of Europe (Spain is a good example), with an emphasis on the transition from totalitarianism to democracy. In this context, since 2007, ASKI has developed projects open to the public such as conferences, workshops, postgraduate seminars, focusing on these periods. 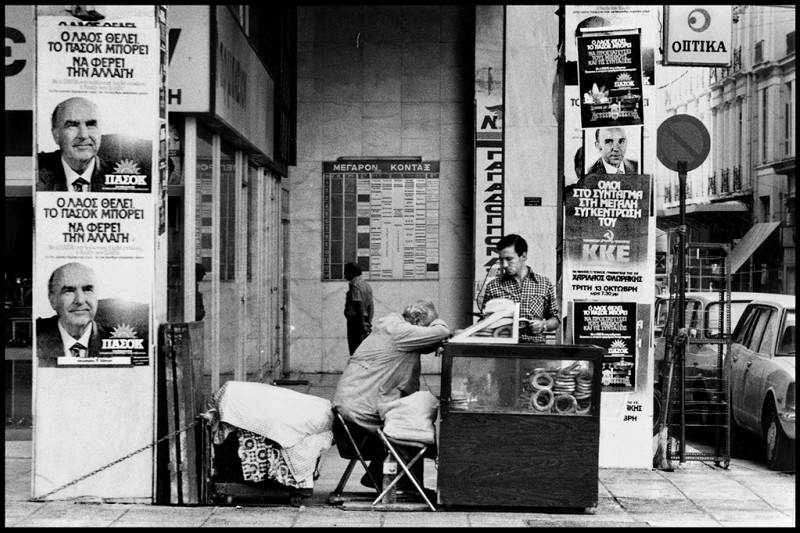 "Metapolitefsi", sensu stricto, signifies precisely this political shift, the restoration of democracy in 1974, a year that marks the beginning of an era of parliamentary normality – the longest one to date. In Greek history, the term "metapolitefsi" was already in use in the mid-nineteenth century, referring to the period from the ousting of King Otto, in 1862, until the arrival of King George I and, later, his official ascension to the throne in 1864. Today , however, these events are mostly forgotten, and when we speak of "metapolitefsi" everyone thinks of the fall of the military junta. What’s rather odd is that the term is gradually dissociated from the year 1974 and has come to indicate a long stretch of time. Thus, in public discourse, the "metapolitefsi" is frequently used to denote the period from 1974 onward, often extending to the present day. In fact, the more proper term for that would be "Third Hellenic Republic", which was never really popularised.

In ASKI's metapolitefsi.com project, "metapolitefsi" extends to the turn of the 1990s, hence the tagline “Metapolitefsi 1974-1989”. We think that, within this period of 15-16 years, the Republic passed the necessary endurance “tests”: junta sympathisers were removed from the State mechanism, a democratic Constitution was adopted, regular alternation of political parties in power was ensured through free elections, the referendum of 8 December 1974 abolished the monarchy (another decisive step towards democracy), Greece joined the European Economic Community, no political parties were banned -as had been the case with the two communist parties (KKE and KKE Interior [Eurocommunists])- and a series of rights and freedoms were consolidated, at both institutional and social levels.

On the social level, a number of movements flourished, such as the student movement, the feminist one and, later, the environmentalist, LGBT and conscientious objector movements. Finally, as part of the "National Reconciliation" effort, a series of political and symbolic initiatives were taken aiming to "heal the wounds" of the past, caused by the conflicts of the Civil War. Thus, in our opinion, the following decade (the 1990’s) marks a paradigm shift.

What are the main sections the visitor can navigate through, and what kind of historic material does he / she have access to?

The visitor to the site can consult rare archive documents on the history of the 1974-1989 period from the ASKI Archives and Library. Keep in mind that this period saw a boom in print media triggered by the lifting of censorship and the intensity of political discourse at the time. It was also a period of liberalisation of ideas and the sense, on a social level, that everything is possible. People -at least democratic citizens- needed, after seven years of oppression, to reclaim control over the present, and their own lives. 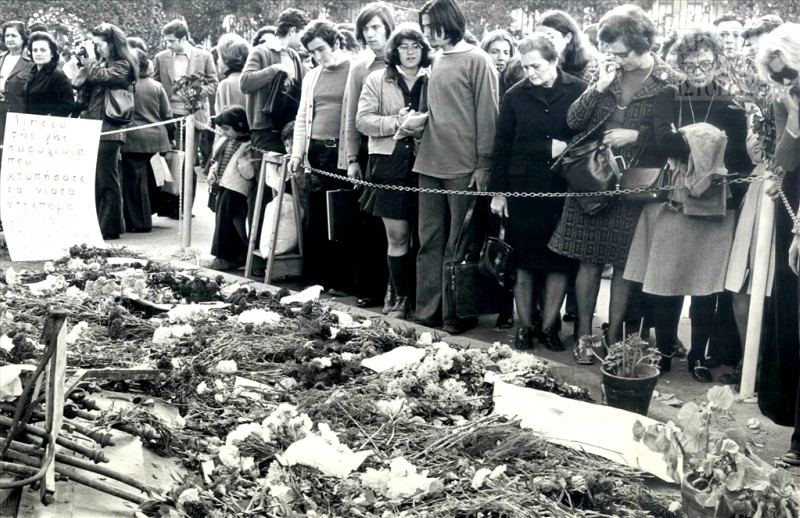 17 November 1974, the first celebration of the Polytechnic uprising © ASKI / Metapolitefsi.com

The material available on the platform covers the entire political spectrum of that period, with an emphasis on the printed production of the left. Thus, the visitor can find a series of election brochures, posters, photos and publications regarding the crucial issues of the time. The visitor can thus become familiar with the discourse, the arguments, the aesthetics and, in general, the "essence" of the time. The concept of the site is to offer specific working environments around the key aspects of the period, creating the following seven categories: Politics, Europe, Employment, Society and Movements, Economy, Culture, Memory.

Each section is designed as a source of stimuli and subsequent research according to the following structure: a central text of general character, complementary research tools (such as interactive maps, timetables with landmark events) and thematic anthologies with archival documents around a specific subject (for example: the 1974 referendum on the issue of the form of government, the women’s and feminist movement, the first celebration of the Polytechnic uprising, etc.). In some cases, we have included texts of a more specific nature, shedding light on certain aspects of a topic.

In addition, seventeen videotaped interviews are available on the site, by people who are conveying their own experience and also making a critical assessment of the 1974-1989 period. These people with diverse backgrounds, political affiliations and identities, describe the way they experienced the events of "metapolitefsi", thus linking personal and social history; a "game" between historical coincidence and personal journeys.

Tell us about the referendum of 8 December 1974 – how important is this date today?

The referendum of 8 December 1974 finally closed the chapter of monarchy in Greece, since the Greek people, by a vast majority of almost 70%, vote in favour of the Republic (the exact percentages are: 69.18% against the monarchy and 30.82% in favour). Thus the monarchy -which had (with the exception of the "interval" of the 1924-1935 period) marked the course of the Modern Greek state for almost two centuries- was definitively abolished. 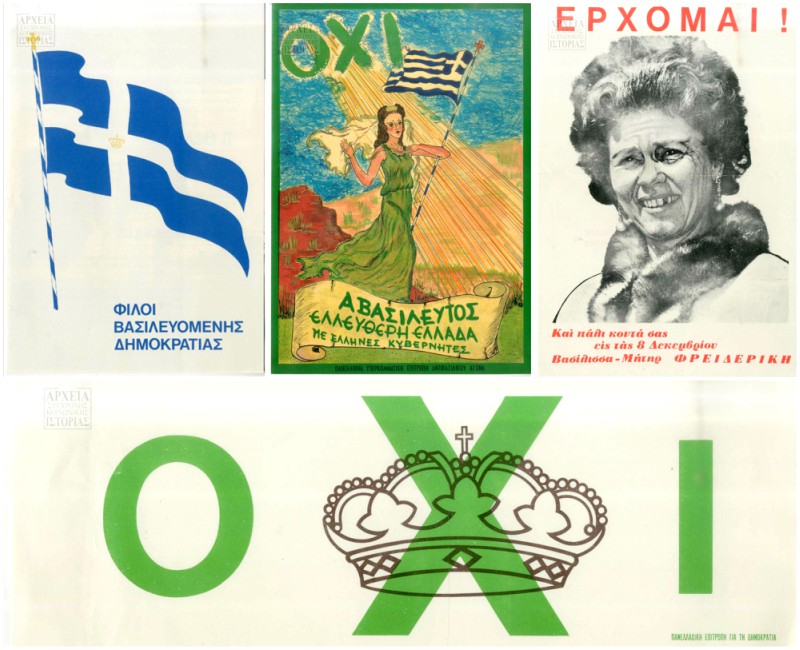 Brochures and posters for the referendum of 8 December 1974 © ASKI / Metapolitefsi.com

It must be noted that, in the 1960s, the Crown’s interference with government affairs led to political instability with the events of July 1965 (a political crisis that pitted King Constantine II of Greece against Prime Minister Georgios Papandreou; these events are known as “Iouliana” or “Royal Coup”). Moreover, the Crown’s interventionism regarding state affairs actually contributed to the political tumult, which the colonels exploited to abolish democracy in 1967.

The December 1974 referendum essentially paved the way for the adoption of the democratic constitution of 1975, answering the fundamental question regarding the form of government in favor of the Republic. Finally, it can also be said that the 1974 referendum is the second instance of a normal electoral process after the fall of the Junta – the first being the free elections of 17 November 1974.

On a more general level, ASKI is undertaking a series of initiatives in the direction of the digitisation of historical archives and their free availability to the public. What is the purpose of such initiatives and what is their impact on society?

Since their founding in 1992, ASKI has adopted a policy aiming at the free access of citizens to archives and therefore to history. The founder of ASKI, Philippos Iliou (1931-2004), who had received a French historical education, considered historical awareness to be a civil right in a democracy. These statutory principles, regulating ASKI’s operation to this date, extend from physical archives to web content as well. In my opinion, free access to historical archives and knowledge contributes to our national self-awareness.

In this context, since 2004, ASKI has put great effort in making its archives available online via the website www.askiweb.eu but also through independent projects such as the website www.métapolitefsi.com we are presently discussing or another recent initiative, the Makronissos Digital Museum, www.makronissos.org. We believe that, through these projects, users can better understand the purpose of ASKI and its collections, and they have access to well-documented research tools, not exclusively academic in nature, but of a general interest. In other words, these platforms help historical archives become more user-friendly and appealing, as part of the recent development of Digital Humanities, a scientific field that offers multiple tools and methods of approaching the science of History.

Above all, I believe that, thanks to these websites, we create a platform of critical dialogue around subjects that are of interest to us as researchers, historians or citizens; a platform where information, filtered through historical research and scientific documentation, is presented in a rational manner. We must not forget that the Internet, much as it contributes to the democratisation of knowledge by countering geographical and social imbalances, is at the same time filled with websites that promote stereotypes, myths, inaccurate information and superficial interpretations of History. 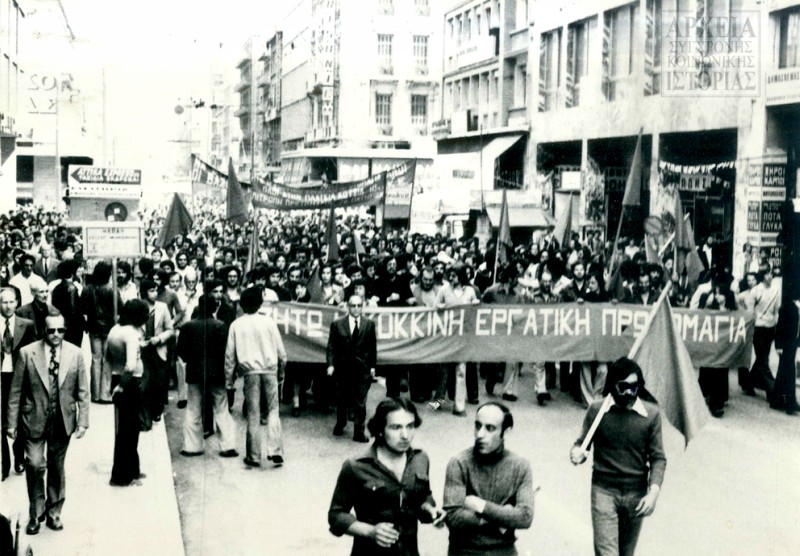 With regard to ASKI’s online audience, I would say that they are very active, both on the aforementioned websites and on our social network pages: our Facebook page is followed by about 9000 users and the metapolitefsi.com website has had more than 30,000 visitors in its 5 months online. These are people who have cultivated a critical way of thinking, and they offer us a great deal of feedback through comments, suggestions and occasional confrontation – all the elements of an open dialogue.

We should also mention that, thanks to the immediacy of digital media, there are people following our work who often offer us their personal documents, family archives, knowing that this material will also be available online, becoming part of the wider research programme. In this way, the personal story of a prisoner of Makronissos, a handwritten note, or a photo of a demonstration from the “metapolitefsi” era, become the subject of studies, articles, theses, making the donor feel that he/she has contributed to a broader effort of disseminating knowledge.